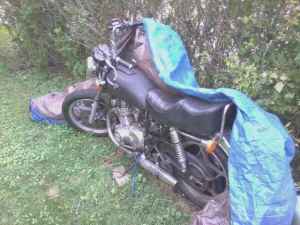 
It all started with that headline on the local Craigslist page. Almost every day I look at the motorcycle section on Craigslist I wasn’t really looking for a project but starting in the end of October I began noticing that a lot of 70’s – 80’s Japanese motorcycles were popping up for very low prices. Eventually the reality of fall and winter started setting in and I realized that I needed a project for the winter to keep me entertained. I knew I wanted a motorcycle to fix up and the only other two criteria I had was that it have a clean title (hard to come by in cheap 70’s – 80’s Japanese motorcycles that are on Craigslist) and that is cost under $200. The above ad is the one that caught my eye, I already have one Suzuki (a 2002 SV650s) and I liked the idea of having another Suzuki twin (although a parallel twin instead of a V-twin) in the garage.

As you can see, the picture doesn’t really give anything away. It looks like a cruddy bike under a tarp and that is what I assumed two. The kid who was selling it didn’t have email, so I had to text him to get what little info I could out of him. I pretty much lucked out with the fact that this kid worked second shift because otherwise I’m sure that someone would have snapped it up before I could get out buy it. In the week and a half that I corresponded with the kid via text message, I was able to learn that it had just recently stopped running three months earlier and that was when he stopped riding it. That was enough for me to want it, it wasn’t going to be one of those bikes that has been sitting for the last 20 years and have all the issues that come along with that sort of bike.
This is the prologue to the story, the first few blog posts will get you up to speed with what I have done so far and then I will update as I do more work and the project progresses, so stay tuned!
Posted by juanbook at 18:35