Oldbike: Signs of Life From the Starter

Bad news (sort of) on the simplicity front of things with the project.  Upon re-installing the starter I have had some signs of life, which is good in one way, and bad in others.

What sucks now is that once I have a fully charged battery and I try this test again, if the starter fully engages and turns over the motor that would mean that the starter is good.  That is good news is it would be expensive to replace the starter if I couldn't find a rebuild kit but the bad news is that now I have to delve into the birds nest that is chasing down electrical gremlins.  The truth is I am much more experienced in the mechanical side of things than I am in electronics.  And there are a number of areas that could be causing the starter not to engage upon pushing the starter button on the handlebar controls.  It's not as simple as one switch, there are a number of safety features built into the ignition system that have to be functioning in order for the starter to work.  Off the top on my head the ones I can think of are:

1. The actual thumb switch on the handlebar
2. The clutch sensor on the other handlebar (will not let the starter engage unless the clutch is held in)
3. The neutral safety switch (if there is one, won't let you start the bike while it is in gear)
4. The stand safety switch (also if there is one, won't let the bike start while the kick stand is down)
5. Any of the wires interconnecting all of these switches.

So for now the next order of operations is to continue working on the carbs, and test the starter by jumpering the solenoid (which bypasses all the aforementioned safety features) and see if the engine will turn over.  I will also have to look at the wiring diagram and see exactly what I need to testing on the ignition system and learn how to use a multimeter to test current and switches.  The thing I have to keep in mind while I am working on all of this is that each thing that I do I am learning something and that was the whole idea behind starting this project!

There is one other thing that I will need to run down and that is what this brass vacuum hose connection is for on the carbs.  It looks like they haven't been covered by a rubber hose in some time 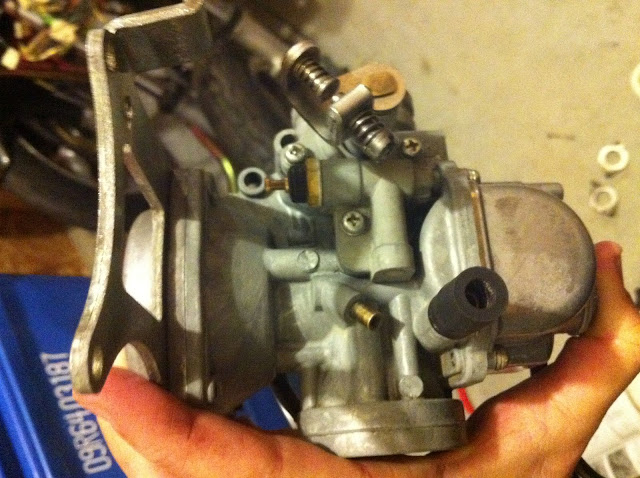 The Clymer Manual makes no mention of its function, only that there a hose connected to it so if anyone reading has a suggestion please post up a comment!
Posted by juanbook at 08:15