Oldbike: The GS Rustles From Its Slumber, Roars, Then Goes Back to Sleep

Friday I finally had some time to dedicate to the GS425E Project.  My plan for the day was to get the carburetors back on the bike, and empty the gas tank of the bad gas, put the gas tank back on, get some new gas into the tank and see if it would start.  Getting the carbs back in took up the bulk of the time as it is just a tight squeeze and reconnecting the throttle cables is never as easy as disconnecting them.  To ease the process I decided that once again I’d take out the cam chain tensioner to give myself some more clearance.  Once I got the carbs back in and the throttle cables back on it was a lot more difficult to put the three bolts that hold the cam chain tensioner back on because it was so tight but eventually I got them to a point where I was snugging them up and apparently I torqued the lower one a little too much and SNAP!  There went the bolt I always thought the old adage, “tighten it up till it loosens and then back it of a quarter turn,” was funny until it happened to me. 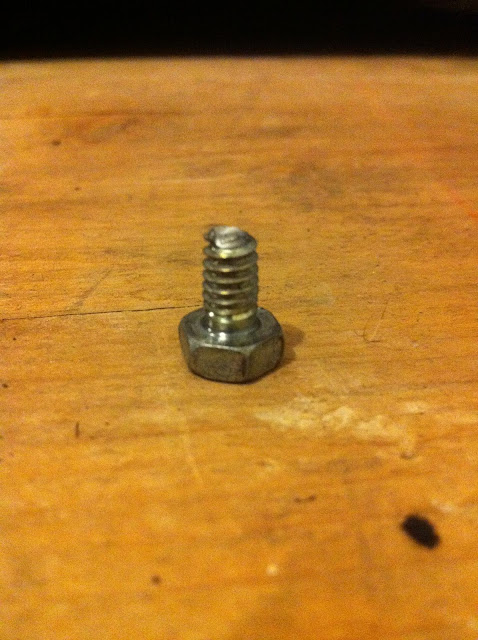 Undeterred, I decided that I would push on and see if I couldn’t get it to start anyhow.  So I disposed of the bad gas in the “most environmentally friendly” way available to me and re-installed the tank and put in about a half gallon of fresh gas.  When I started working I had thrown the battery on the charger and when I got to a point where I wanted to start the bike it wasn’t fully charged but I figured I’d give it a go.

It didn’t go well so I decided to regroup and fully charge the battery and give it another shot on Saturday.  Saturday never happened as I was really sick so fast forward to Sunday and I went out to give it another go with the fully charged battery.

As you can see I did get the bike to start and run for a bit but by then it was getting really cold and I wasn’t really over my sickness all the way so I figured that was enough for the day.  A few things I noticed while attempting to start the bike:


So there are some things to work on for the next installment which will probably be over the next weekend unless I find some time one of these weeknights to try some different things.  I should be studying for a work related task at home so if you see an update that means I’ve been slacking off.
Posted by juanbook at 12:50