Oldbike: The Better To See You With My Dear 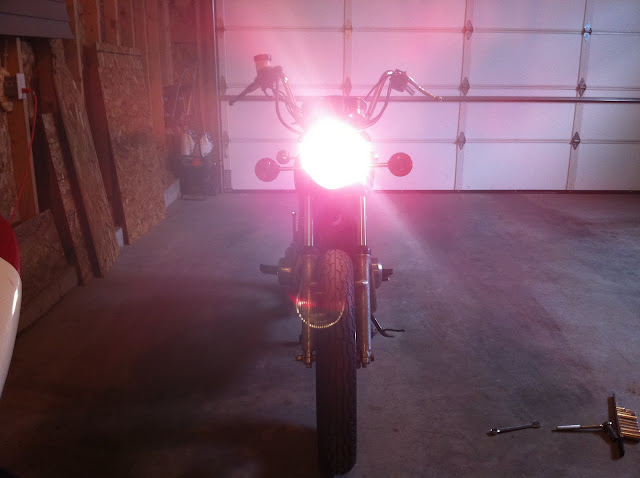 Today I spent a little time with the GS 425L and got the headlight brackets re-bent and re-installed onto the fork legs again.  All the measuring and sketching I did was for naught as after a quick search I found some photos of unmolested brackets on Ebay and was able to discern that they should be bent at basically 90 degree angles. 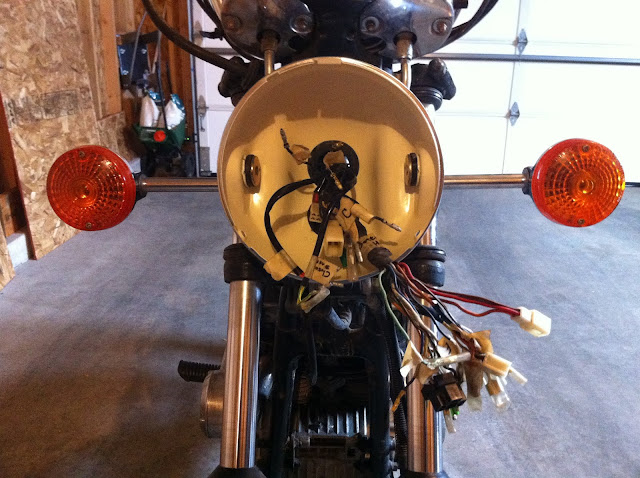 Once I got the brackets back on I went ahead and reinstalled the turn signals and then ran the wires back through the headlight bucket and reconnected them. You can see in the above picture that the headlight is a actually centered on the triple trees now. 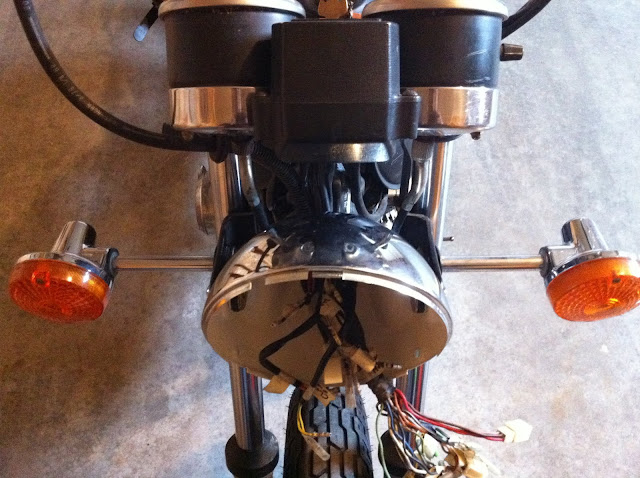 In the preceding picture here you can see that the turn signals stalks are now in line with each other and at 90 degree angles with the longitudinal axis of the bike now too.  Mission accomplished!  I'm still not sure what I am going to do about the turn signals in the long run, the more I look at the stockers the more ridiculous they look to me, like giant lollipops.  I might try something as simple as shorter stalks for and try to bring them in closer to the headlight at first and see how that looks. 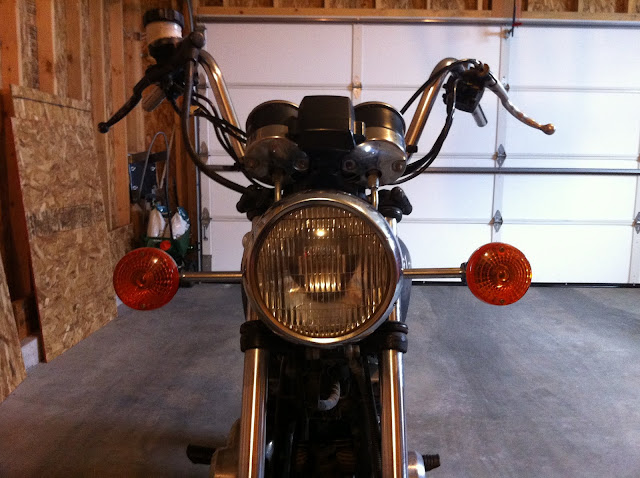 Once all the connections were re-established I cleaned the old headlight bulb off because I was handling it with bare hands a lot (a headlight no no) and reinstalled it on the bike just to see if it would burn out or not, I do have the brand new one just in case but why open that if the old one still works? As you can see in the in first picture of this post the headlight worked fine and so far hasn't burned out! 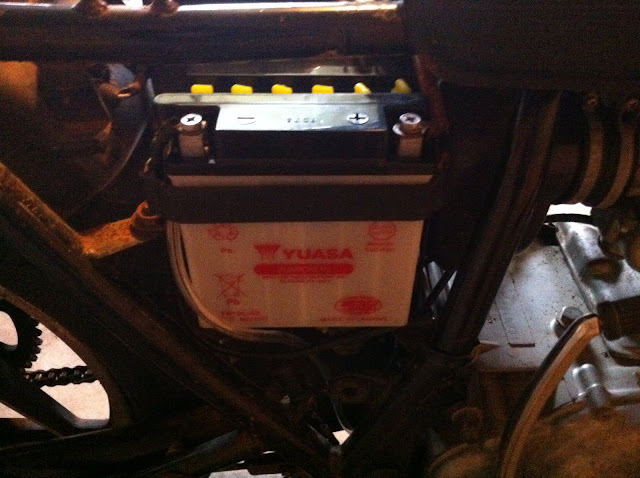 I also picked up a new battery for the bike to replace the Energizer brand battery that was on the bike when I got it.  The kid that owned the bike before me told me the battery was new but it's performance after many charges over the winter told a different story.  So a trip to one of the local Suzuki dealers netted me a direct replacement Yuasa battery for the bike.  The Energizer barely squeezed into the battery tray with the top of the battery rubbing against the top frame tube.  As you can see in the above picture this new one fits a lot better! 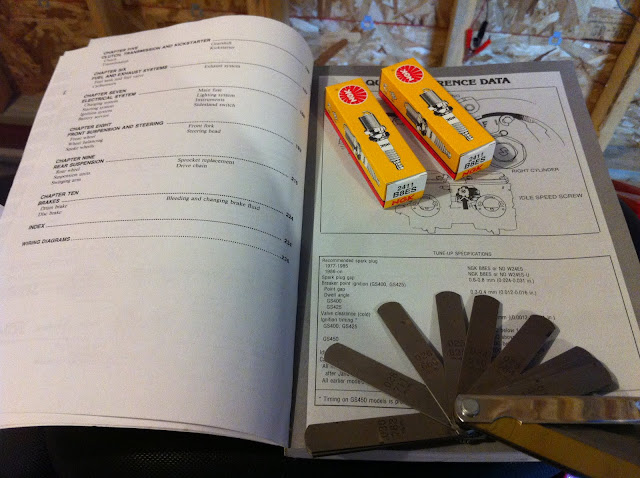 The next thing on the list to do for the day was to replace the sprak plugs.  The old ones did spark but at $2.25 a piece it would be foolish to sit and wonder why your bike won't idle and not replace these cheap things first. 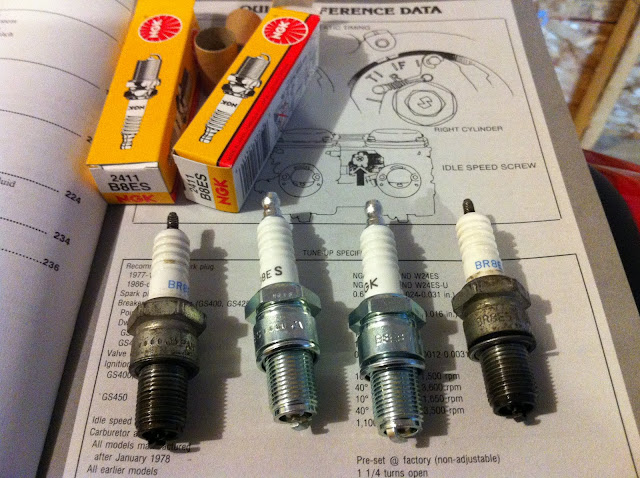 Can you tell which ones are the new ones? 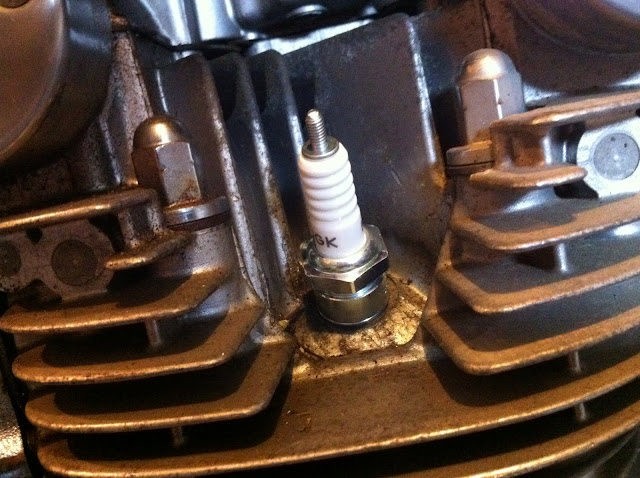 In the video below you will see why this picture is funny, I stopped to take a picture of the newly installed plugs and it just goes to show you what happens when you break your train of thought.

So yeah... there is no limit to my absentmindedness  sometimes!

I am going to have to post this video over in the "Technical" forum over at CafeRacer.net and see if I can get any input as to what is going on with the bike and why it won't idle.  There are a lot of old bike gurus over there that just might be pick up something obvious that I am missing (Sometimes that can be as obvious as not having the spark plug wires disconnected).

I did start in on repairing that seat tonight as well, I'm no upholsterer but  hopefully I will have pretty good success with my attempts.  That and more to come in my next update, coming sooner than later!  Thanks again for reading!
Posted by juanbook at 20:52