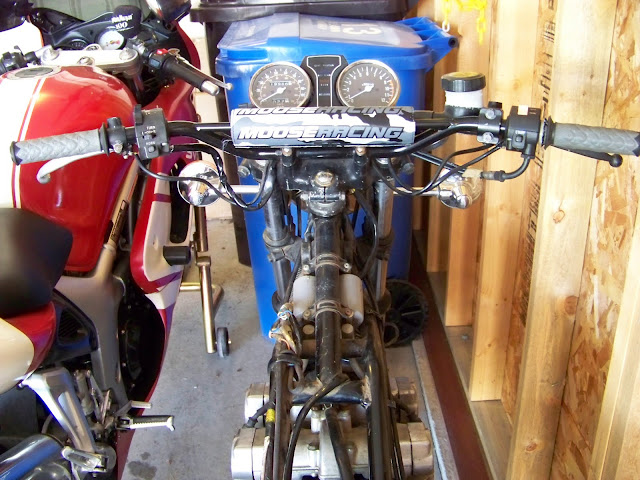 This Tuesday I decided to ignore the mess I found in the drive sprocket “compartment” for the time being and to continue on with the initial project I set out on doing;  Removing the tubeless kit from the front and rear tires and converting back to tubes in the front and rear wheels.  I should probably talk about why I would do this a little more.  First off when I first got the bike I was attempting to put air in the tire with my bike pump (all I have at my house) and the Schrader valve wouldn’t engage the pump enough to press the little valve release in the valve to let air flow into the tire.  So I removed the retaining nut (not understanding at the time that the cast rimes were not tubeless rims) and almost lost the Schrader valve assembly into the tire and all the air came out at once.  Honestly I don’t see a huge advantage with the tubeless conversion if you have a problem with the valve assembly you are basically effed anyhow where if you have tubes in there you could conceivably carry a patch kit or a spare tube and provided you have the right tools (or are as industrious as myself as you will see in the video) you could do a roadside repair.

With my reasoning explained a little better I’ll let you watch the video I made, fair warning it is about 15 minutes long and that is with me cutting out a lot of the struggling and fighting I did.  I hope that I was able to capture the process pretty well still though.

In the pic (Below) you can see the setup I used to support the bike when I removed the front tire. I actually pulled the front wheel without the stands there and used one hand to lower the forks to the ground and then lifted the front to place the jack stands underneath each fork leg.  It’d not too heavy to lift with the bike being near balanced on the center stand. 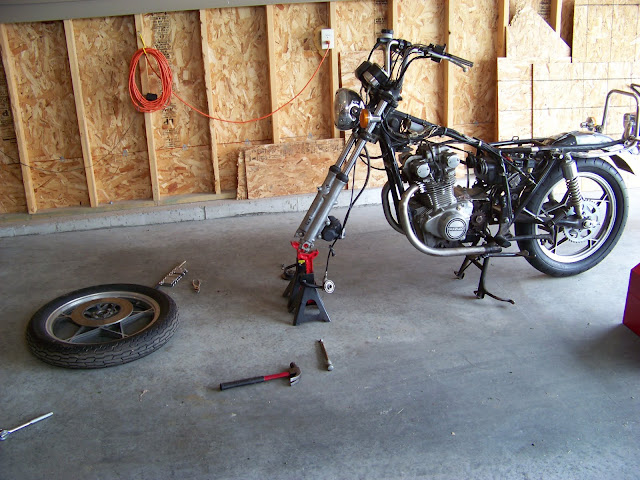 After it is all said and done about an hour’s work to put a tube in the front tire. 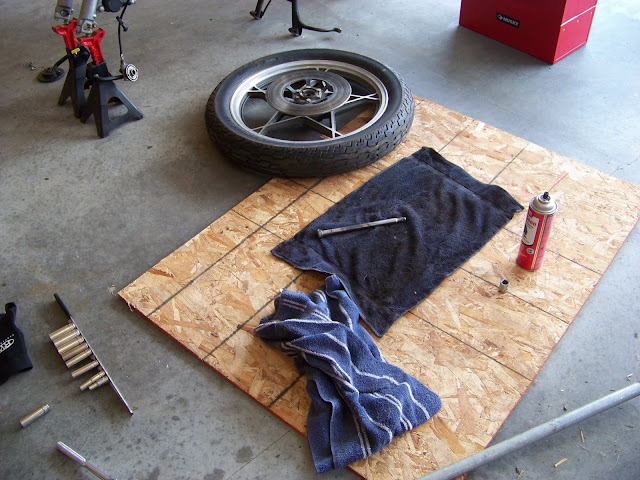 There’s plenty of pics around the blog of the bike with it’s bullhorn handlebars but as I was disassembling I thought I’d take one more for reference. 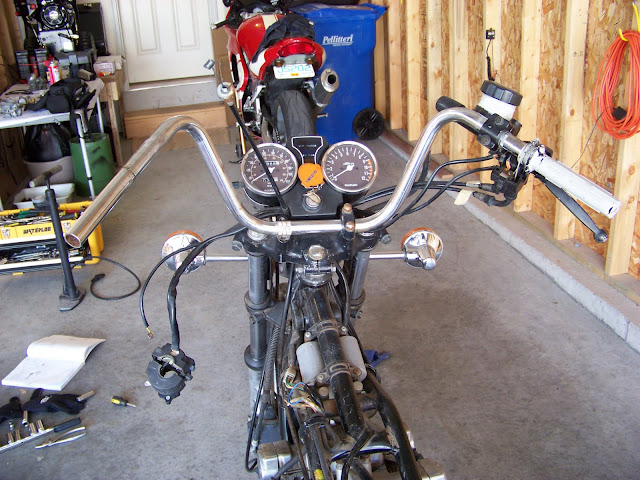 The main reason that I decided against going with a set of clubman bars or clip-on bars was that if this bike was going to be a daily commuter it would be nice to still be upright and have a lot of leverage.  Clubman bars cost a lot more than MX bars and can potentially dent your tank if you have the wrong kind.  And not only would clubman or clip-on handlebars cost more, they would have forced me into designing rear-sets for the bike to keep the riding position comfortable.  This bike isn’t really going to fit the café racer stereotype so I figured I’d go with something that has a little more utility and in my opinion looks pretty badass. 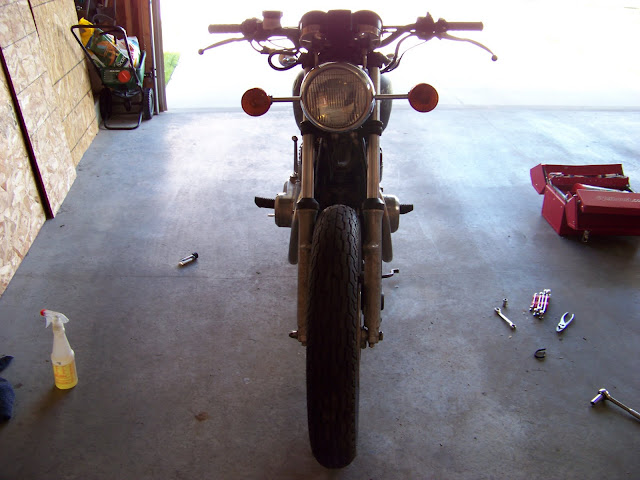 As you can see the overall height of the bars has dropped significantly, also there is a lot of excess wire, cables and brake line in the mix now; yet another side project spawned by the parent project.  In the above pic, I really like how slender the bike looks, but those Popsicle stick turn signals really mess up that look.  I think I will enlist my nackinist friend in shortening those stalks down so that the signal lenses are right next to the headlight bucket.  It will fix the lines of the bike without me having to but new signals, a win-win solution for a budget build.  I will have him do the same for the rear turn signals as well.

In the next pic you get a feel for how much lower the bike is with the new bars now that is what I call a “low slinger.” 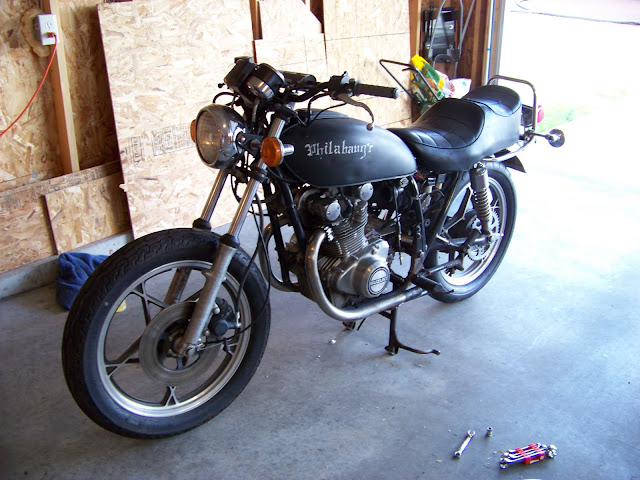 It really does need a different seat, I might have to make a trip to the local cycle bone-yard and see if I can find something a little more sporting to match the lower stance. 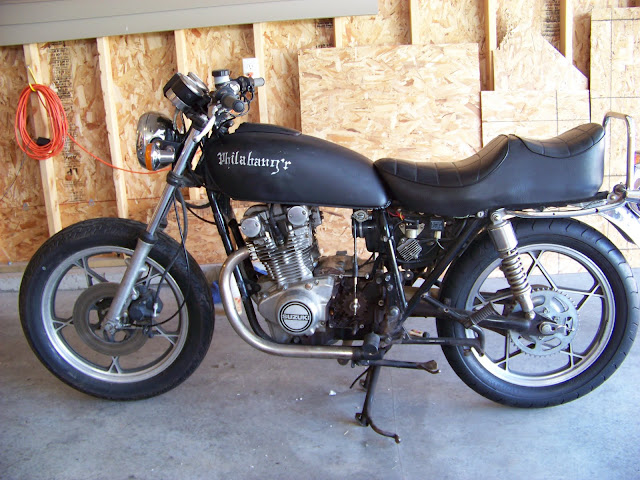 One issue that I did run into was that there were locating tabs inside the bar-mounted control housings that were causing clearance issues with the new bars.  On the left control housing I was able to fold it flat and on the right side housing I had to clip it off and file it down with some tin snips.  I finally installed the “Spider” handgrips that I had in waiting for the project.  They go pretty well! 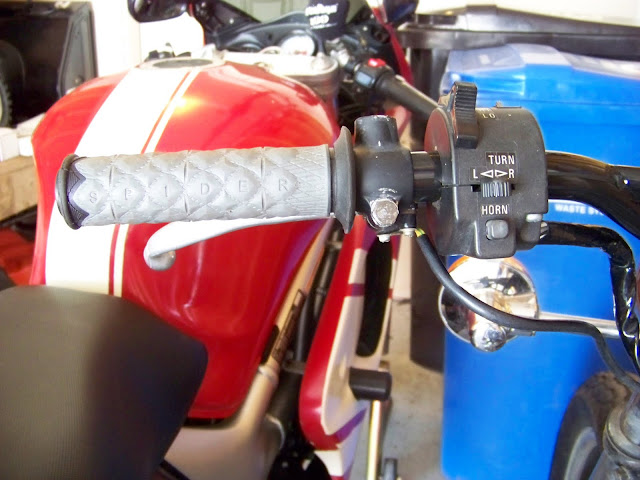 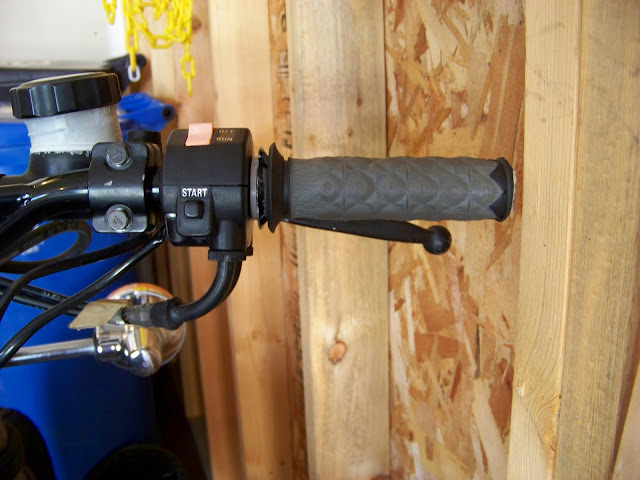 This update pretty much catches you up to where the bike is at the moment.  I have a few more days before I start in on my next run of shifts but there will be time in there for me to keep plugging away and I will keep the blog updates as time and progress permits!

As always, thanks for reading!
Posted by juanbook at 09:26