Oldbike:New (Old) Carbs In and She Runs!

Halfway through July I finally made it out my local motorcycle boneyard and after about 20 minutes of their parts guy combing through about 4 shelves filled with racks and racks of carburetors he managed to fish out a set from a 1979 Suzuki GS 425!  I was excited with that news as they guy on the phone had told me that they only had a set for a GS 450 which probably would have worked but needed some tweaking so a direct replacement was a bonus!   Also included in the deal was a complete throttle cable that was not broken and moved within the sheathing a lot better than my original so that means I only need to find one more to have a completely functioning set with no defects. 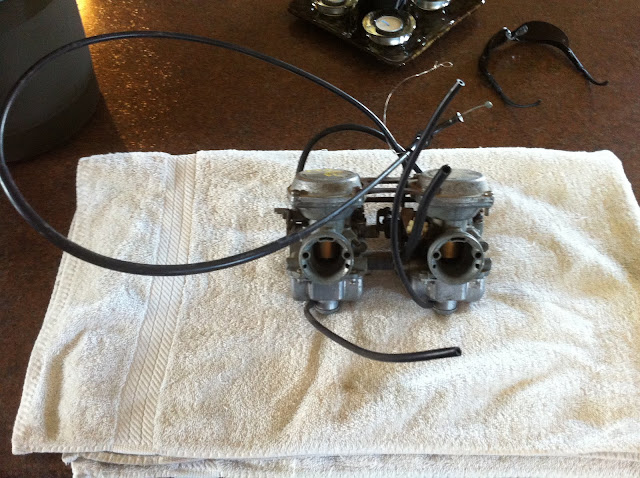 Since the GS 425 is not a real sought after or in demand bike I got the carbs for a good price too.  These carbs were a lot worse off than my original ones though.  A lot dirtier and the slides were pretty much gummed up with varnish and did not want to move at all. 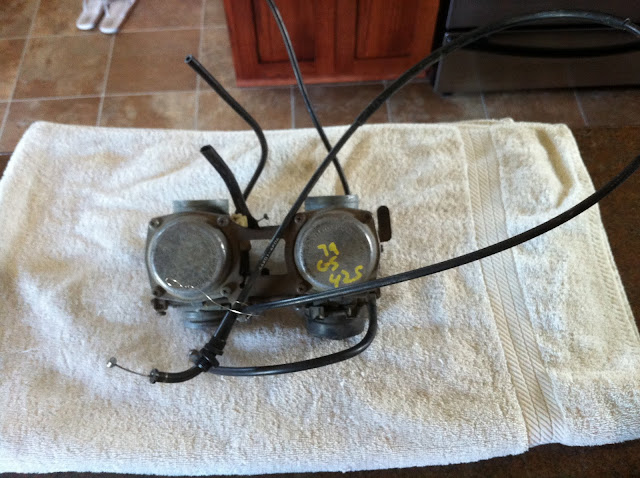 Rather than bore you with a whole bunch of pictures of carb internals again I didn’t take pictures of the cleaning process this time around.   This time around I avoided all the mistakes I made on the first set and everything went quite smoothly.  I made sure that all the passages flowed free and used a wire from a wire brush to clean out all the small nooks and crannies, set the float height at 26.6mm, set the A/F screws at 2 ½ turns out and bench-synched the carbs.
I ran into a few little mix-ups in the re-installation process, the first being the order of putting the carbs in VS. the cam chain tensioner.  The Clymer manual says that the cam chain tensioner needs to go in first and then the carbs.  I have found that I have a much easier time reattaching the throttle cables with the cam chain tensioner out.  The other thing that I ran into was that I flip flopped the lower bracket so when I tried to put the cam chain tensioner back in the lower bracket was impeding on the clearance with the tensioner so it tool a very short screw driver in order to flip the lower bracket without removing the entire carb assembly again.
After all the work I reinstalled the gas tank and rolled the bike out to driveway and prepared to try and start the bike.  First I turned on the choke at the carburetor and put the petcock to “PRI” and thumbed the starter button.  It started almost right away but was idling really high 3-4K so I turned the bike off and turned the choke off and put the petcock to “ON” and started the bike again with a screwdriver handy to adjust the idle speed screw.  I thumbed the starter again, this time the bike was idling around 2-3K and when I started turning the idle speed adjuster screw out the idle responded compliantly and eventually settled to around 1.5K this is the point where I shut it off and grabbed the video camera, taking the following video.

As I said in the video it was quite satisfying to have the bike running and idling (and in my opinion, well) after almost a year’s worth of work!  There is still a lot more to be done with the engine before I take it for a ride or even run it all that much but that will all be covered in future posts.  For now I am just going to bask in the first major hurdle in the project being cleared!  Thanks to everyone who reads and provides feedback it is greatly appreciated!
Posted by juanbook at 06:00