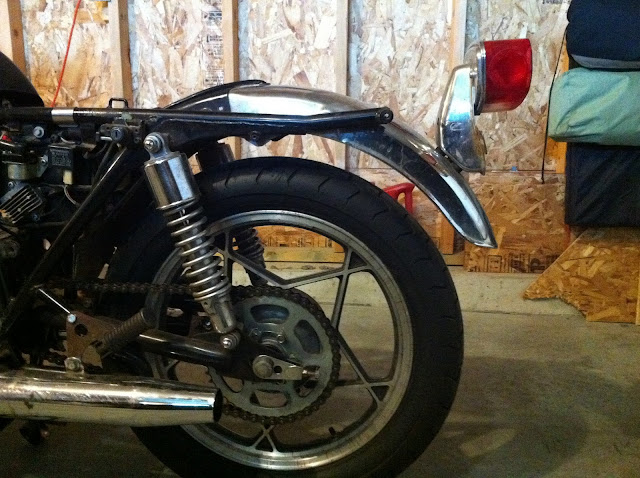 It has been a while since I have worked on oldbike, and this last Sunday I decided to at least give “the ball” a little nudge to start it rolling again.  I have heard it said about any project that the trick to finishing it is to do at least one little thing related to the project once a week.  I let myself fall off that wagon a bit.  Of course marital, domestic, family, and social obligations will take precedence to the work on oldbike (and they have) but there have been times where I could have popped out for a bit and didn’t.  I guess I would say that I was a little burned out on the project.  I have gotten past the desire to make this into a Café racer per-se and am firmly focused on tailoring this bike to my needs not anyone’s preconceived notions of what it should be.  Right now my vision is (and I think I’ve said it before) an urban assault/commuter geared for quick acceleration probably with a top speed of around 70-80mph perhaps with some sort of 0n/off road tires if the make them and for some reason I want to be able to ride the things down some stairs…
I took aim at the most glaringly ugly thing on the bike to me, the huge tail light… it had to go.  Really all it took was a 10mm socket and a wrench for the three nuts that hold the light riser to the fender and a flat head screw driver to loosen the wire looms that run under the rear fender to get the thing off.

Once I had it off I had to take a peek inside the lens just out of curiosity and it is amazing how pristine the inside of the taillight was!  I am sure that it is exactly the same as it looked on the day the bike was assembled 31 years ago! 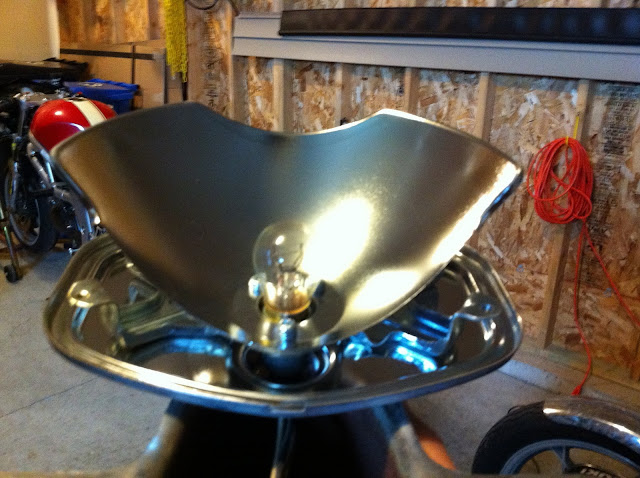 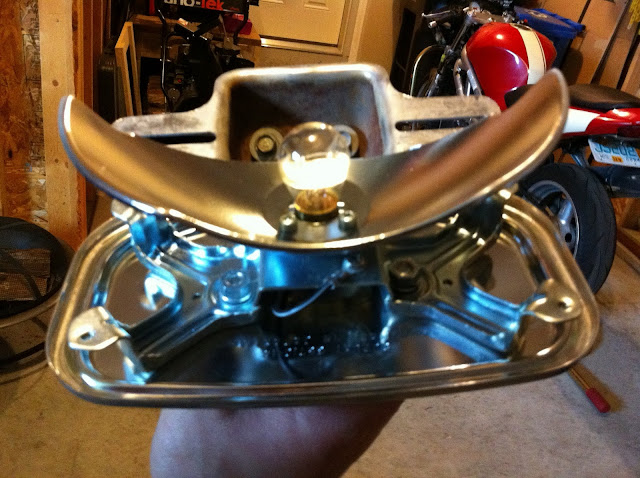 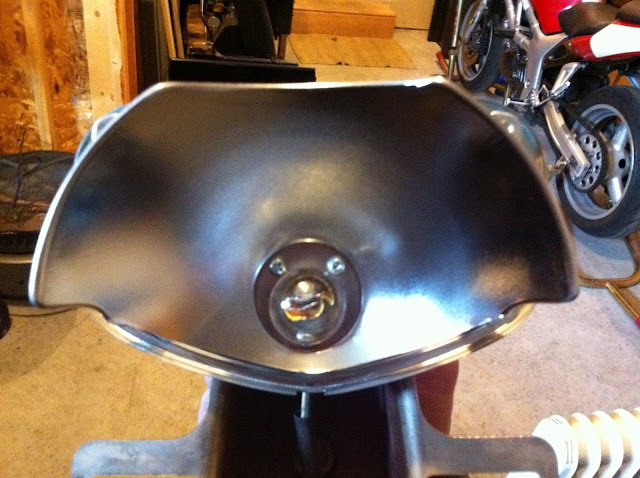 Once off, the rear end of the bike looked so much more spritely and light! 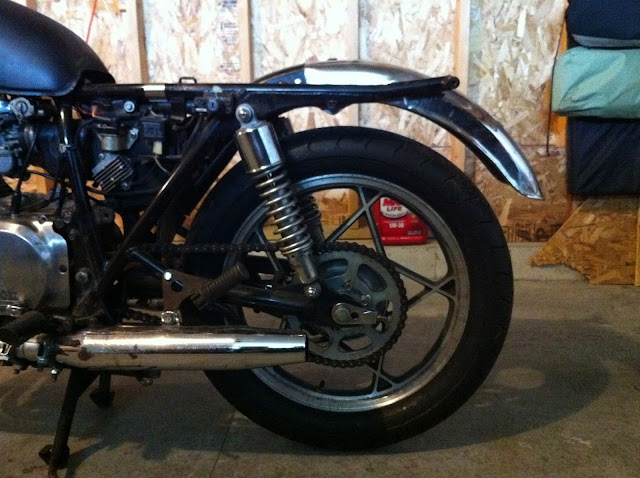 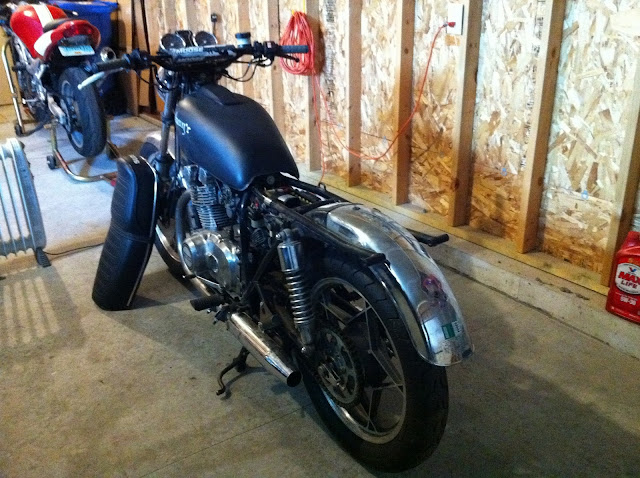 Things to come for the winter will be a search for new gaskets and boots for the carbs and intake, perhaps a teardown of the engine after that if the new boots and gaskets fix the warm idling issue to remove a broken bolt for the cam chain tensioner and re-gasketing the engine.  I still need to manufacture some seat mounting hardware to match the mounting points on the oldbike and once I do I would like to lose those taillight/luggage rack mount points and weld in a seat-look to match the contours of the rear of the seat.  And with respect to the fenders I had originally planned on trimming them but if this is going to be a true commuter bike the full fenders would be nice for the inevitable rain I’ll end up in.  I will repaint the gas tank this winter too but I kind of like the chrome on the fenders so those will get a little cleaning and that will be it.  The headers and mufflers are ugly; I’ll have to decide what to do about that.  As I sit here typing the list keeps getting longer! I would like to have the thing road-worthy by spring as a time table. 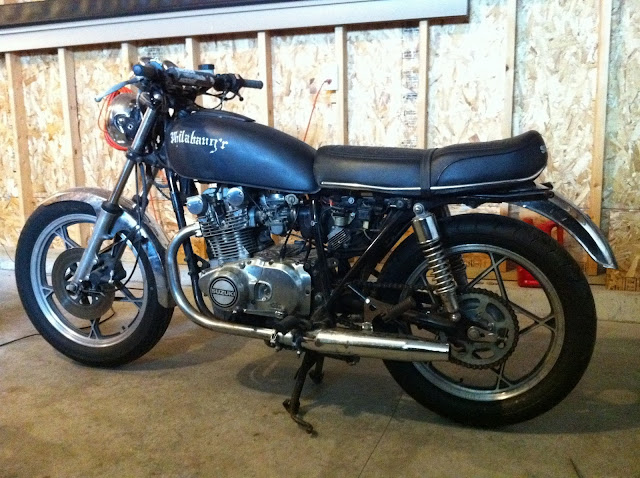 I am thinking of giving this little taillight lens that I found (literally) on the side of a road while on a run, a try, though the only issue is that if I plan on keeping the stock turn signals this might be a little small.  I might have to keep looking for something more balanced. 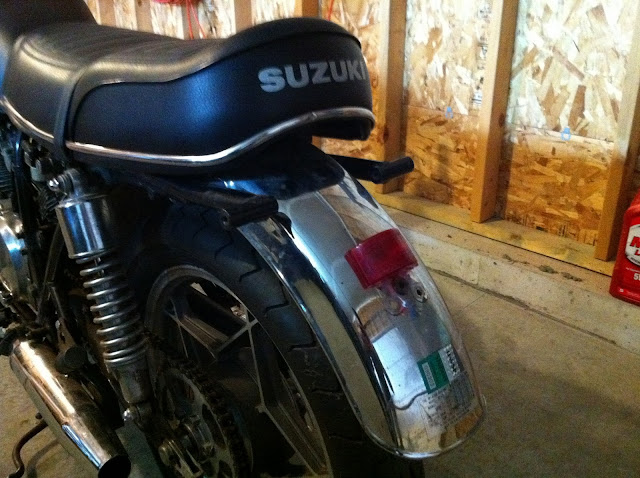 So yeah… I didn’t do a whole lot of work for this post but I need to get started somewhere and hopefully this little nugget will be the just the nudge I need to get the project rolling again.

Thanks of course for reading!
Posted by juanbook at 12:01