Oldbike: Properly Installed The New Seat and other Misc 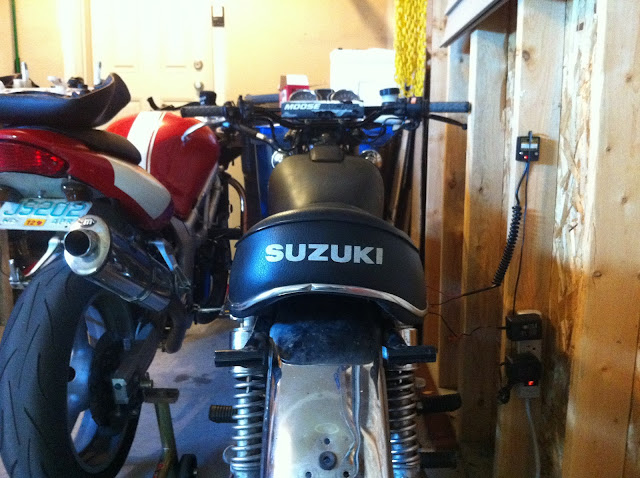 A while back I acquired a seat from a Suzuki GT 185 that was a much needed improvement to the original king and queen seat that the GS 425L came with.  Since then I have pretty much just had the thing set on the frame rails waiting for me to get around to figuring out the best way to get the seat mounted properly.  I had originally thought about keeping the king and queen seat because I thought it would be nice to use when I took my wife for rides but I finally realized that there wasn’t any real way to get the brackets I needed to mount the GT 185 seat without scavenging the king and queen seat.  It had to go…

But first I’d like to brag about my favorite Christmas presents that I got! 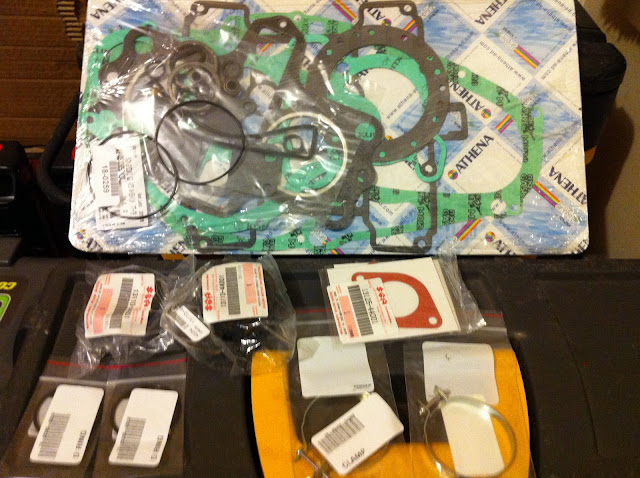 First, I got a complete Athena gasket kit for the engine as well as new carb boots, gaskets o-rings and clamps for the intake between the carburetors and the engine, where I suspect I have air leaking into the combustion chamber after the air and fuel is mixed. 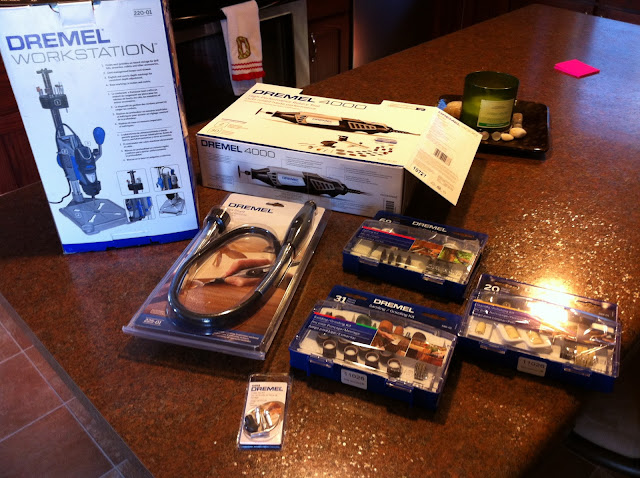 Secondly, I got a Dremel 4000 along with the Workstation, Flex Shaft, Collet Assortment, Cutting Kit, Sanding and Grinding Kit, and a Cleaning and Polishing Kit!  You will see that I got to use some of these things already on this project! 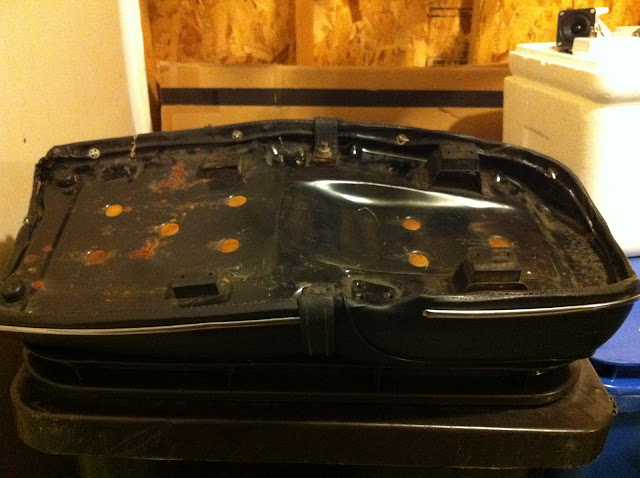 The first step to getting this seat mounted properly was getting the seat pan separated from the rest of the seat. 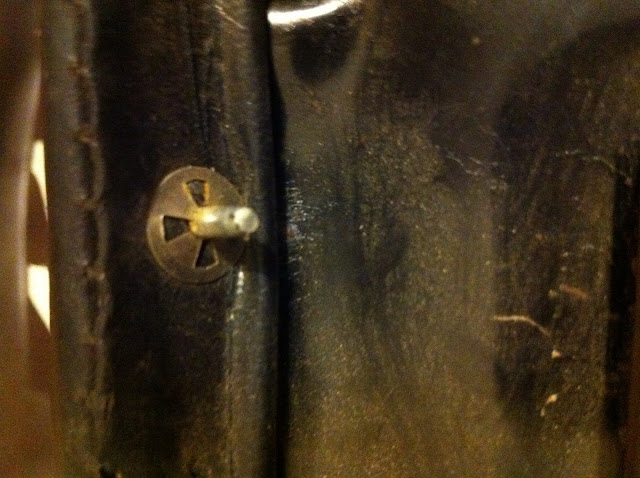 The first thing that has to come off are the chrome accents that are on the seat, they are held on by these fasteners basically they way they work that they are flat before they are installed on the pin and when you push them on the pin they bend out and when you try to pull them back off they clamp down onto the pin even more.  The way I got them off was to just use needle nose pliers and wiggled them back and forth until they worked their way back off the pin.  Now the pin itself is made of a very malleable material and I didn’t have any trouble with any of them breaking and the fasteners themselves also came off without any being broken.  Your results may vary, keep in mind most of the stuff we (shade-tree mechanics) work with are old and should be treated with a little more care than new parts. 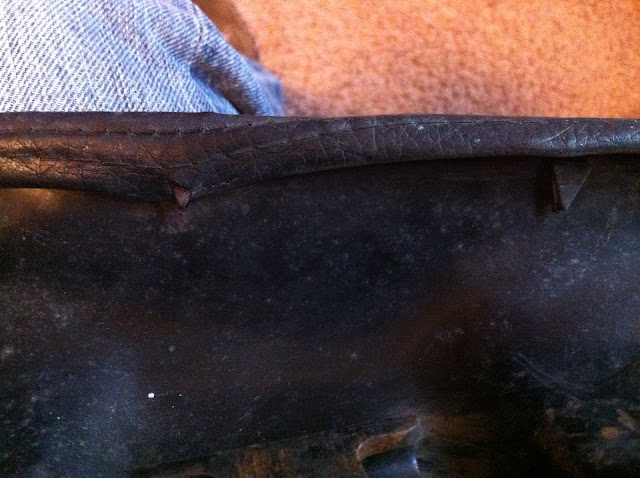 The seat cover itself is held on in the same fashion as shown on the king and queen seat repair I did a while back.  The material is stretched over the seat foam and then hooked over teeth punched out of the seat pan.   To get the seat cover off just pull down to free the material from the teeth and then out and release it from the teeth working your way around the pan.  I used needle nose pliers on this as well careful to not tear any of the stitching or poke through the seat material. 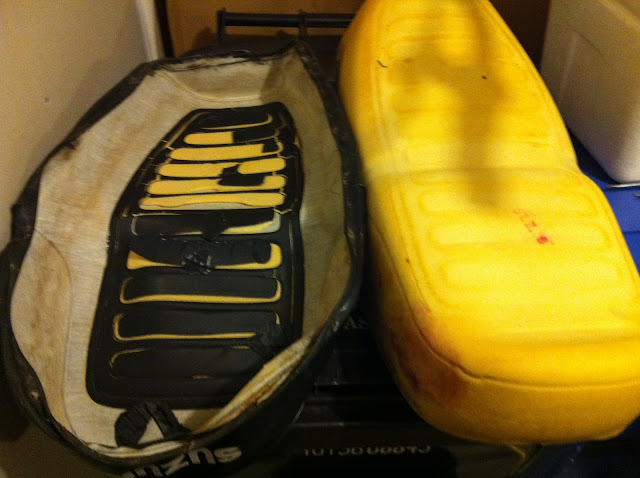 Once you get the seat cover free from all the teeth it should come off pretty easily there may be some remnants of adhesive between the cover and the foam that hasn’t been my experience with either the king and queen seat or this GT 185 seat I am working with. 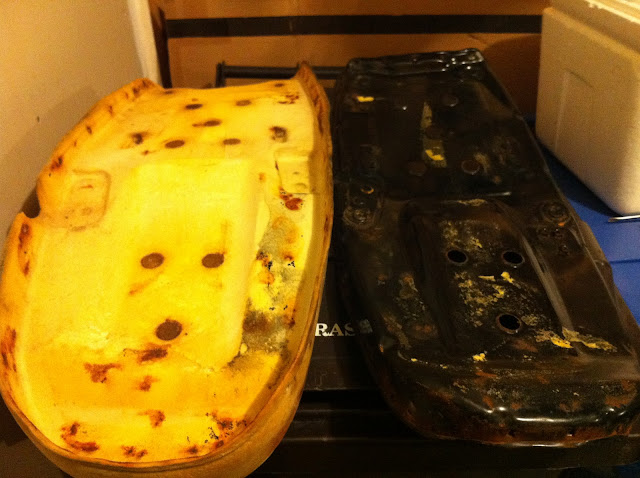 There will be some adhesive holding the foam to the seat pan I just worked my hand in between the pan and the foam slowly and the adhesive gave way pretty easily without leaving any chunks of foam on the seat pan. 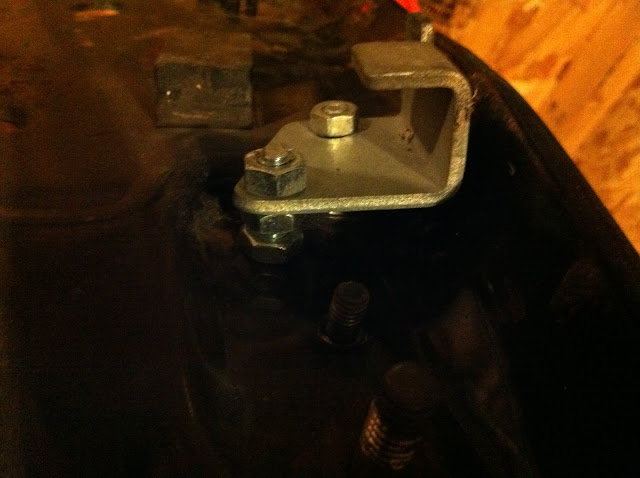 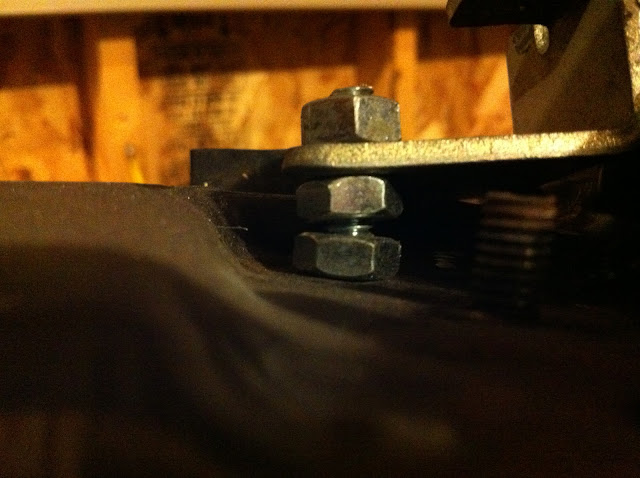 The first part I aligned on the GT 185 seat pan was the lock latch.  I decided to use the one from the GT 185 as the contact points were exactly the same.  First I aligned the seat pan properly relative to there the pan would be relative to the gas tank and made sure the rubber pads on the seat pan were aligned with the frame rails.  Having accomplished that, I placed the locking latch in the proper position and held it that position with my hand and removed the seat pan, checked to make sure that the latch didn’t move when I removed the pan and marked the holes in the latch with a sharpie. The only issue came as you can see above was that for the latch to be in the correct position the latch was hovering over a valley in the GT 185 seat pan.  What I ended up doing was using a longer bolt and first fixing it to the seat pan with a nut and then adding a second nut to adjust the height level to seat pan not in the valley and then placing the lock latch where it should be and securing that with a third nut.  What you can’t see in those pictures was that there was a factory placed bolt similar to the one in the foreground inhabiting the space where I put the height adjusting bolt that needed to be drilled out because it wasn’t tall enough to accomplish what I did with the replacement bolt. 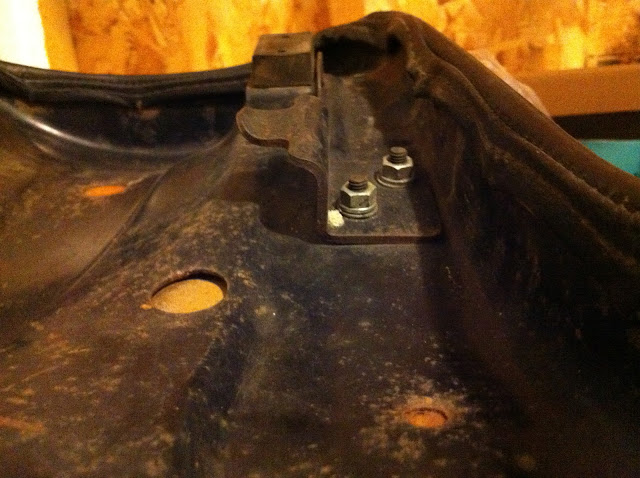 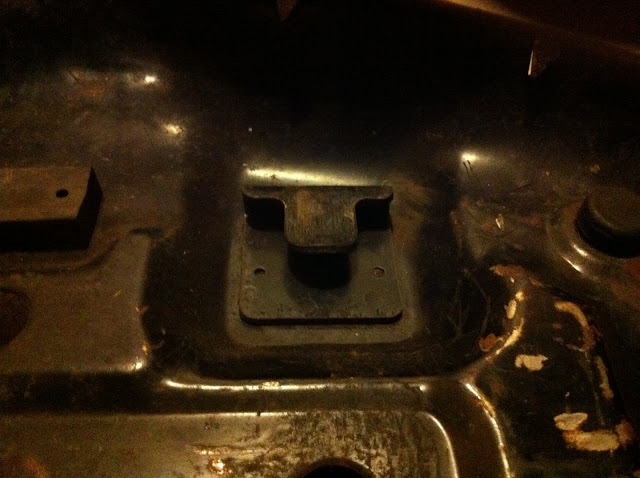 Above you see the two mounting brackets that I need to scavenge from the king and queen seat one will be simple to transfer as it is just bolted on and I can remove it and drill holes where needed in the GT 185 seat pan and mount it using nuts and bolts.  The second one is welded directly to the seat pan so I will need to cut it out and drill holes in it as well as GT 185 seat pan to mount it using nuts and bolts. 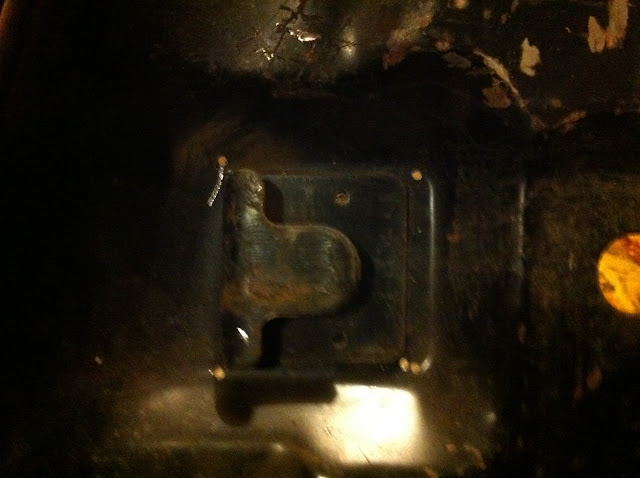 The welded on bracket resided in a valley on the king and queen seat which would be hard to get into and cut properly even with my new Dremel so I drilled small holes in each corner being sure that when I connected the dots to those holes on the other side of the seat pan that the lines would clear the thicker portion of the bracket making it easier to cut only dealing with the thin seat pan metal. 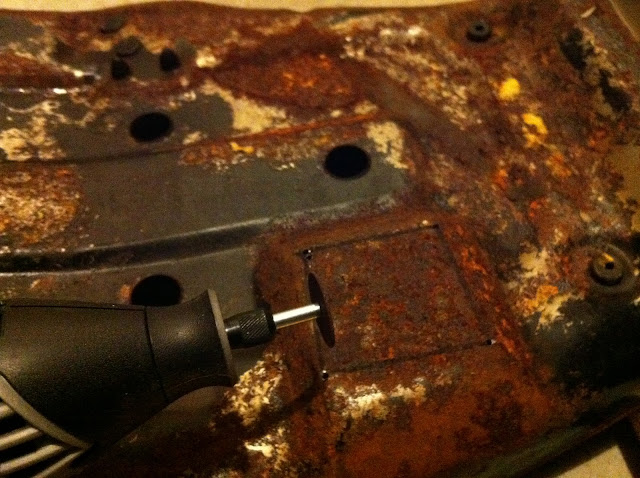 You can see I’ve connected those drill holes with a sharpie and will cut along those lines to get the bracket free.  It is much easier to cut in a raised position than in a valley on the other side.  As a side-note, notice how much rustier the king and queen seat pan is than the GT 185’s.  If you recall I repaired a tear in the king and queen’s seat cover  which appeared to have been there for a long time, this is the effect of moisture getting into that seat foam and working it’s was down to the seat pan and just sitting there causing all that corrosion. 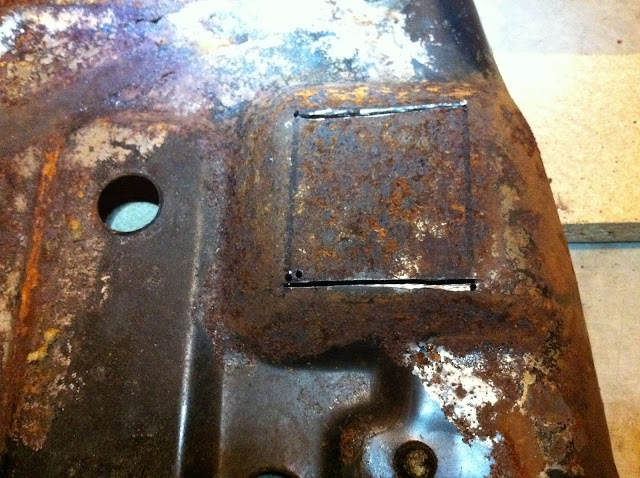 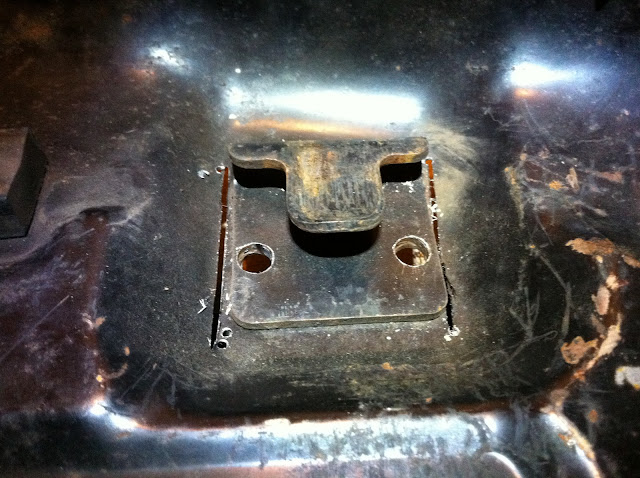 As I got two of the lines cut I realized that I should probably drill out the mounting holes on the bracket while I still had it attached to the seat pan making it handy to hold still while drilling. 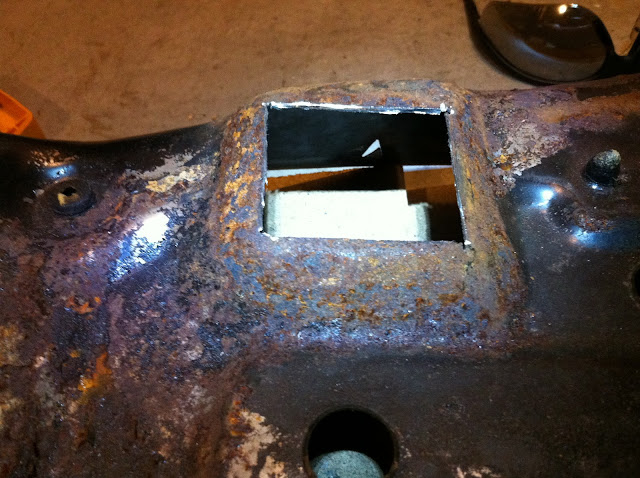 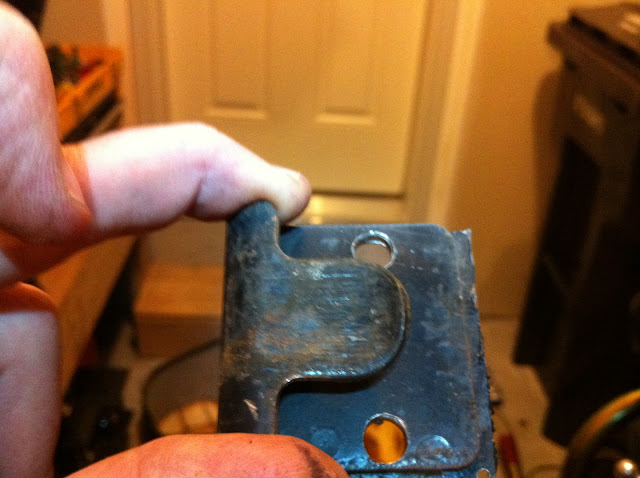 A couple more zips and the bracket was free!  As a not for those who are curious, I went through two of the Dremel heavier duty cutting discs to get the bracket free.  Also I am sung a regular corded Dewalt drill to drill the holes, not the Dremel. 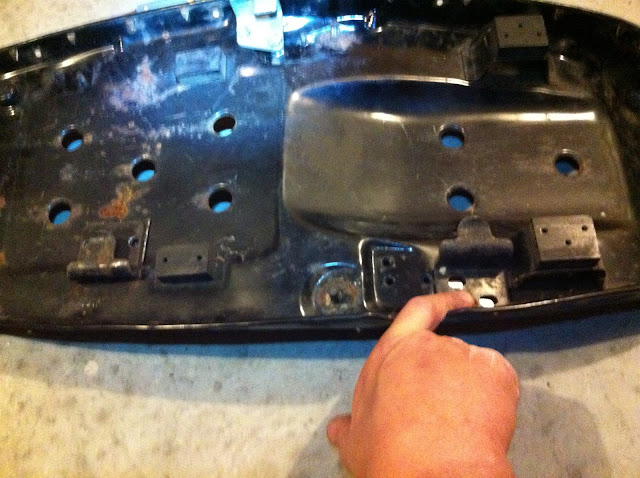 To locate where the brackets should go I first set the seat ban on the frame rails and locked the latch into the lock giving me a fixed pivot point to adjust the seat alignment around.  I made sure that everything lined up as I did earlier and slid the bracket that was bolted on the king and queen seat into place and on the rear latch point and held it there while removing the seat and marked the holes again with a sharpie.  Once I had that one located I did a similar process with the bracket I cut out of the king and queen seat pan but this time I held I drew lines around the bracket while the seat was in place on the bike to make sure I had the proper placement.  In the above picture I am checking to make sure that the alignments make sense, since the seat frame rail is straight the brackets should be directly in line with each other (they were). 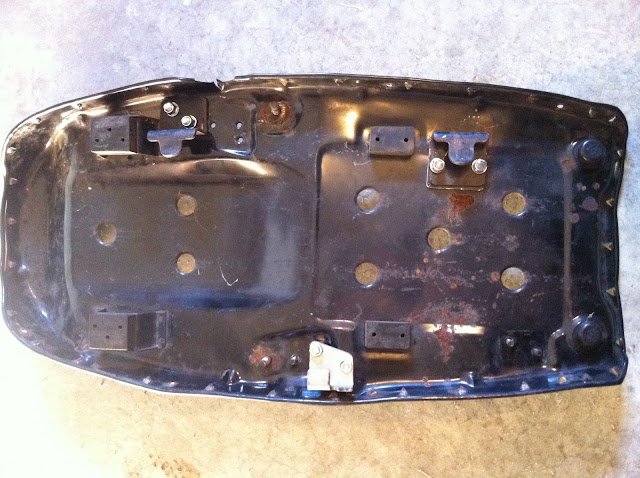 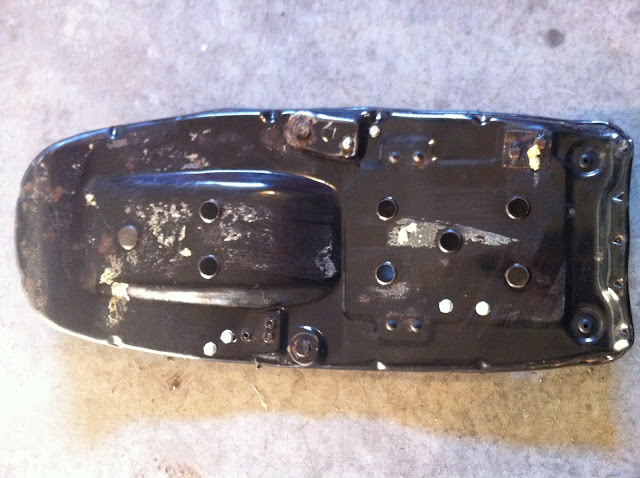 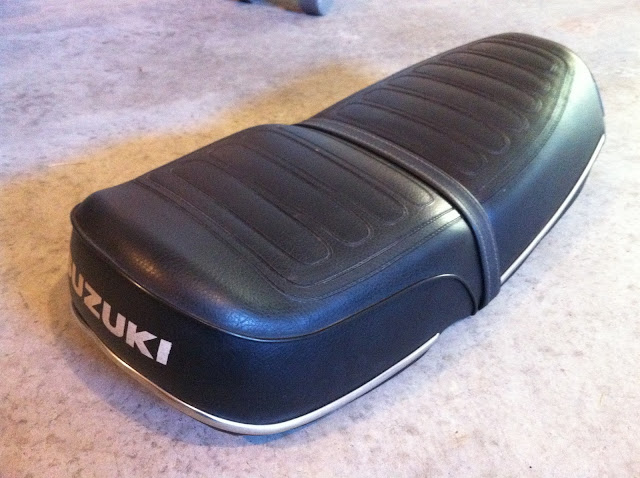 Here is the seat re-assembled I thought about using spray adhesive to re-attach the seat foam to the pan but in the end did not I think it should stay together just fine.  If I notice any abnormal shifting I may have to take it apart and glue them back together. 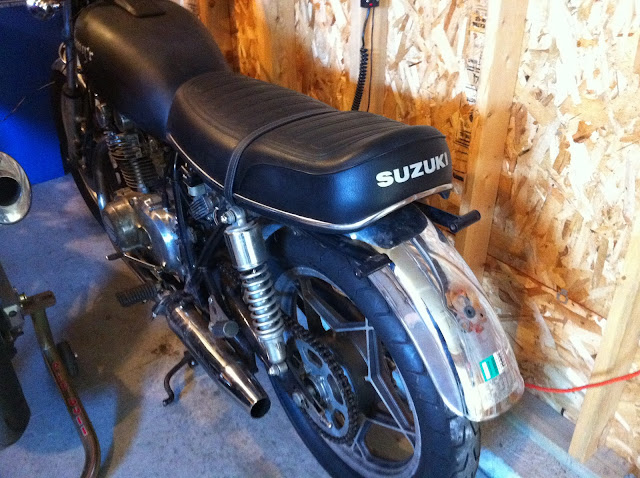 Back on the bike. 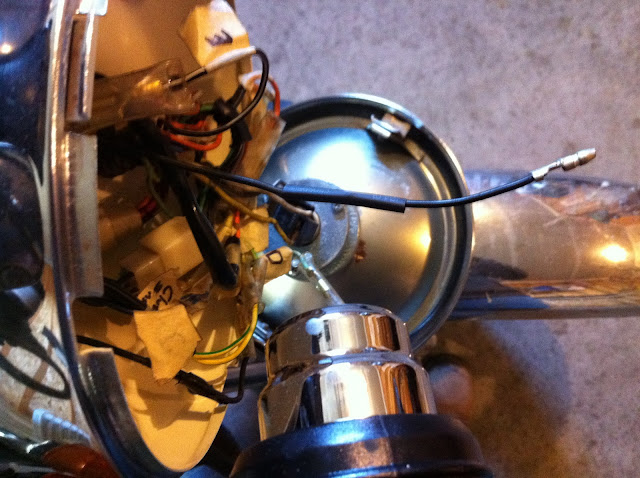 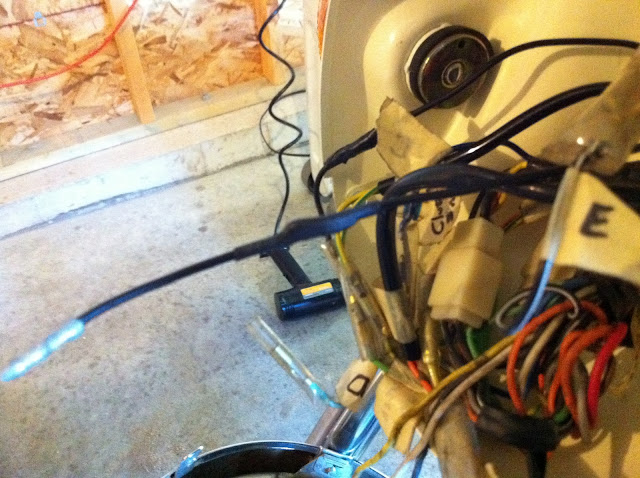 As a follow-up I did go back and put shrink tubing on the wires I soldered for the front turn signals while I was at it. 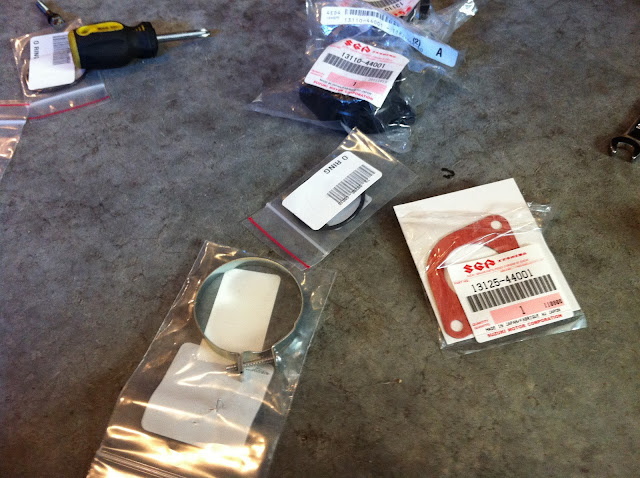 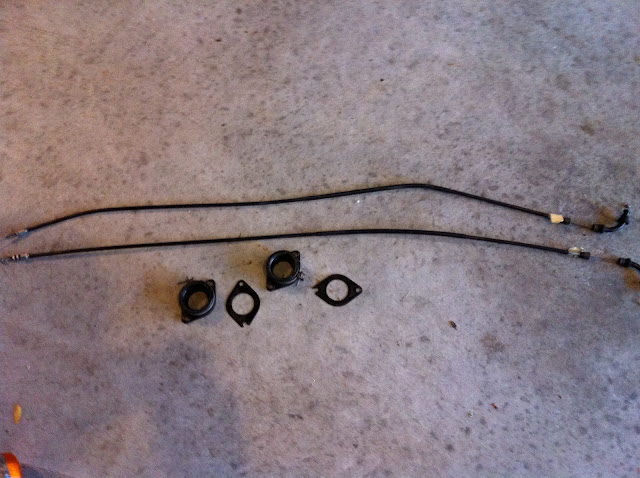 I also removed the old gaskets, carb boots, o-rings and clamps and replaced them with the new ones I got.  This was pretty simple as I had to take them out anyhow to see what I was doing when re-routing the new (from the junk-yard) throttle cable I got (the bike now has two non-broken throttle cables) down to the carbs so I just re-placed them when re-installing the parts.  The only tricky part in that process was making sure that the o-ring stayed in place when sliding the spacer and the gasket into place as the clearances are tight.  Now I will have to go through and vacuum synch the carbs and set the idle again to see if the new intake hardware made a difference. 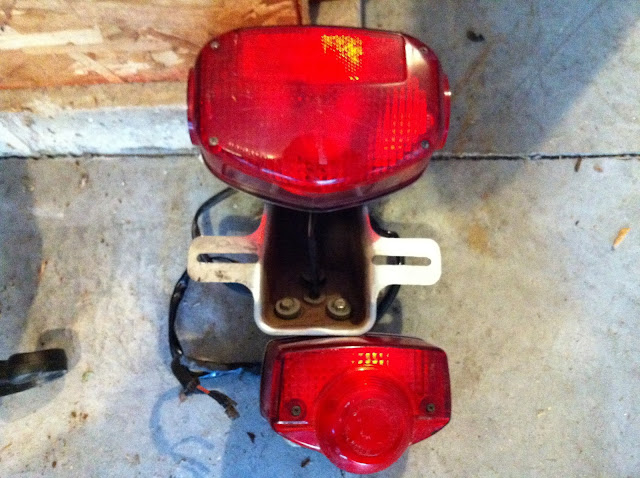 Also on tap for next time, while I was at the junk-yard I found a tail light from a 1970 Honda CB350 that is much smaller and more proportional to the turn signals that I will be figuring out how to mount to the existing bracket which will be lowered and then also I may shave some of the depth off of the CB350 tail light lens to make it a little slimmer.  I will also be making some spacers I need to mount the turn signals directly to the rear fender.

Stay tuned for some more updates as they come and as always thanks for reading!
Posted by juanbook at 12:28