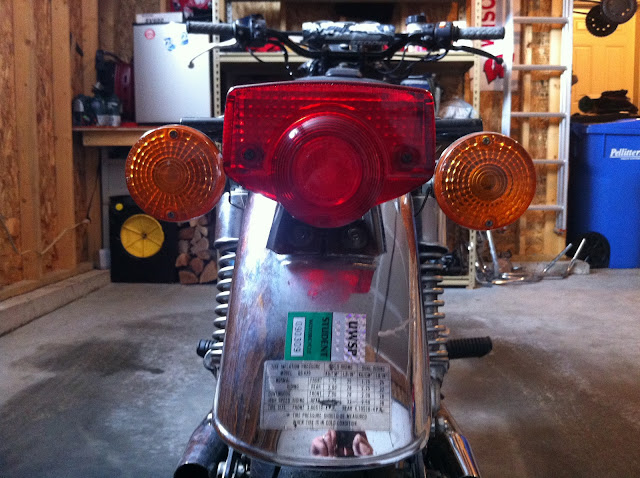 It's been a good three day break from work, I spent the last two days in the garage, yesterday building a shelf to get my beer fridge off the ground and up to a more serviceable height... 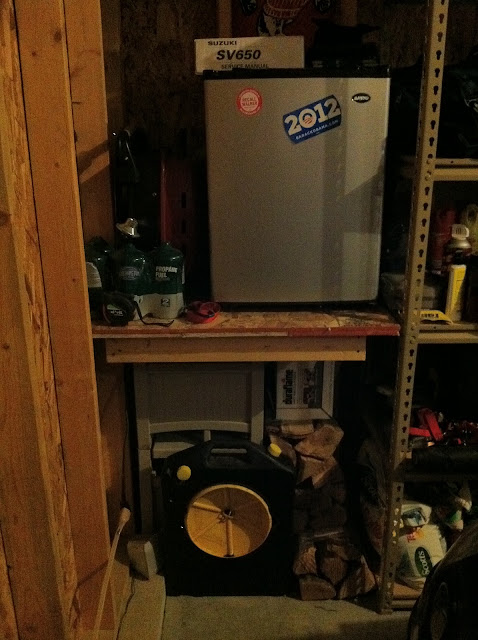 ...and today Making the spacers I needed to properly mount the rear turn signals onto the bike rear fender. Yesterday it was warm enough to work with the garage door open the whole day! Today was a lot colder but hey... Its January!

I had some plastic spacers in my misc tool box from god knows what that looked like they would do the trick. Naturally they would need some tweaking to make the useful for the task I had in mind. First the holes in the spacers were too small so I had to drill them out. It is times like these that I wish I had more space in my garage, as it sits right now I operate out of three tool boxes and each time I work on something out come the boxes and subsequently all the tools I need and then when I am done everything ha to go back into the tool boxes (because I am a neat freak). It would be nice to have a work bench where everything that I use frequently could be laid out and a large tool chest to keep all my tools in one place. I am holding out hope for the tool chest not too much of a chance for the work bench though. It would also be nice to have a drill press for tasks like drilling out spacers etc... 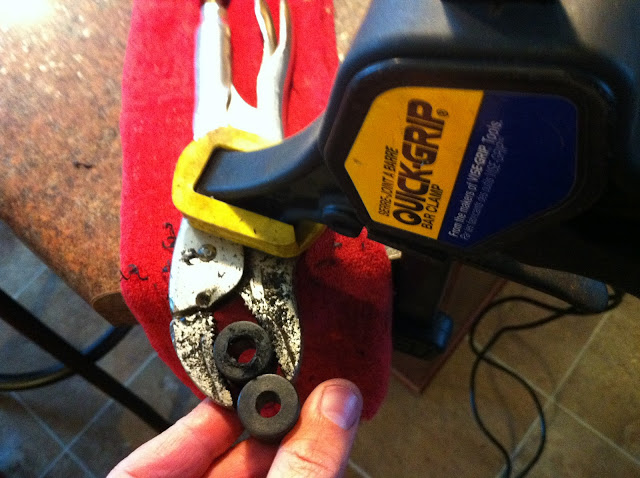 It is a good thing that I had 4 of the spacers because on two of them I did not do such a good job of drilling the holes so straight. If you look at my cobbly setup it's hard to believe I had issues right?

Anyhow, as I am writing this I am realizing that I didn't do a very good job of taking pictures for this one. After drilling out the holes I went out and measure the angle of the pitch on the side of the fenders off vertical, which turned out to be 10 degrees off the vertical. I used a hacksaw to cut the angle on the spacers (a little tedious but it did the job). After I got the angle cut I trimmed the spacer down to 1/4" minimum thickness with the same hacksaw. 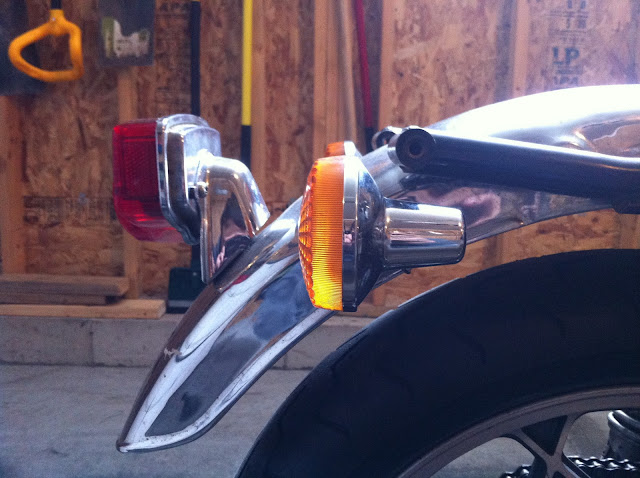 I used the mounting holes on the back of the frame rails as a point of reference and center punched the point for the holes I wanted to drill 3/4" below and 1/4" rearward of the bottom center of those mounting holes. 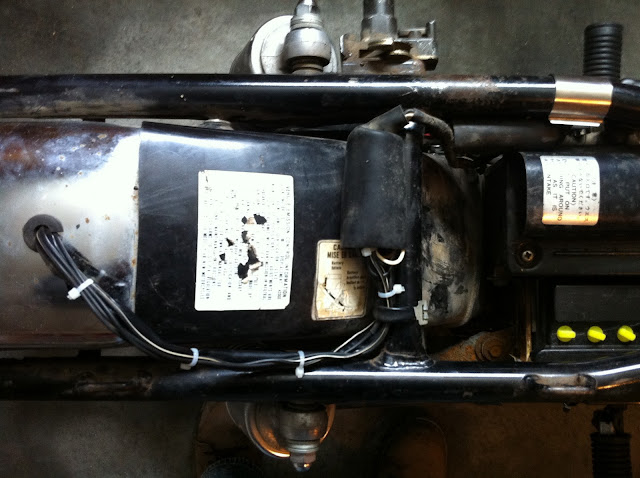 From there it was just a matter of running the wires through the wire loom in the underside of the fender, through to the top and re-connecting them. I cleaned them up with some zip-ties while I was at it. 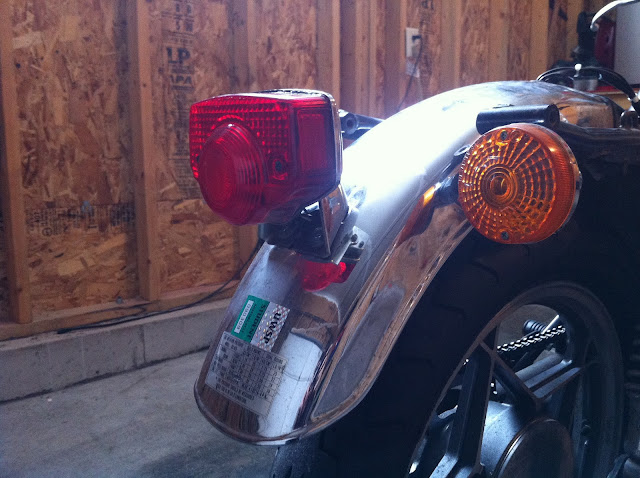 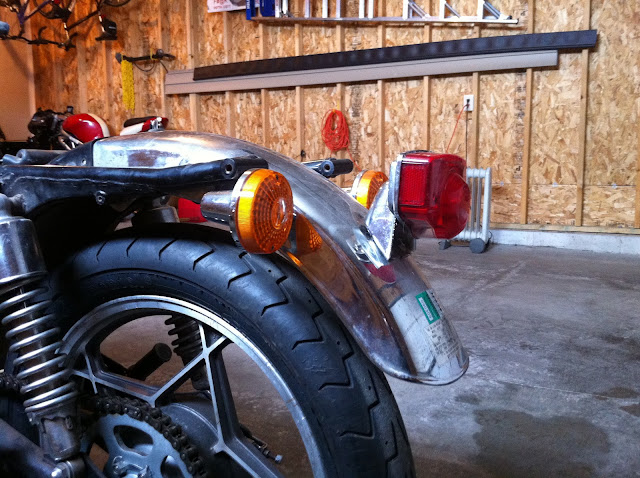 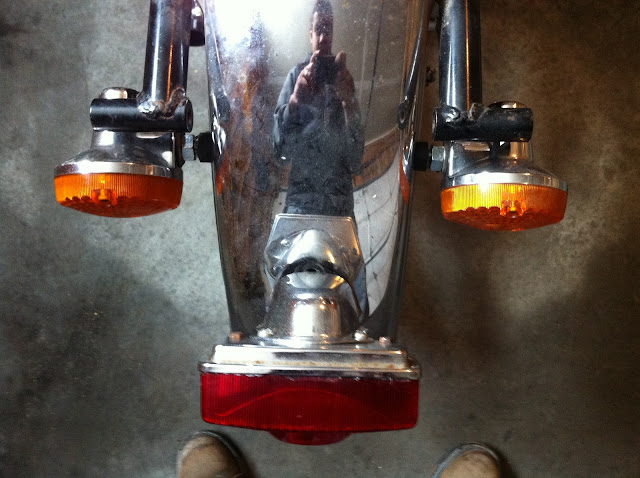 That was pretty much it. I am glad that once I had all the signals reconnected the flasher relay worked again which you can see in the video below.

That is pretty much it for now. There will be some more engine troubleshooting coming up. Time to get this thing running reliably. I'd like to have that taken care of and have the thing titled for the Spring Crud Run! 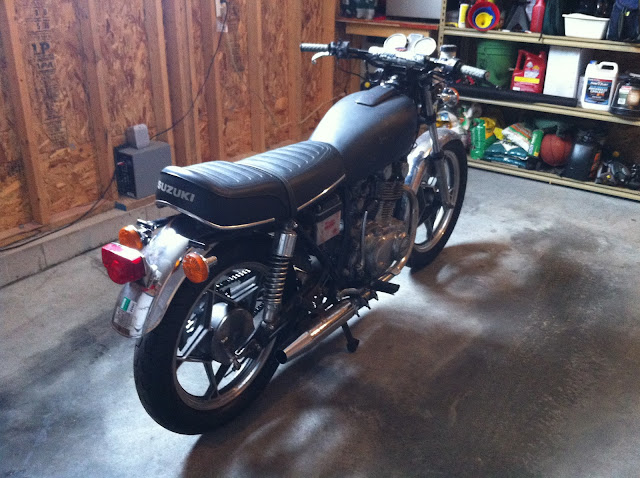 Thanks as always for reading!
Posted by juanbook at 21:05