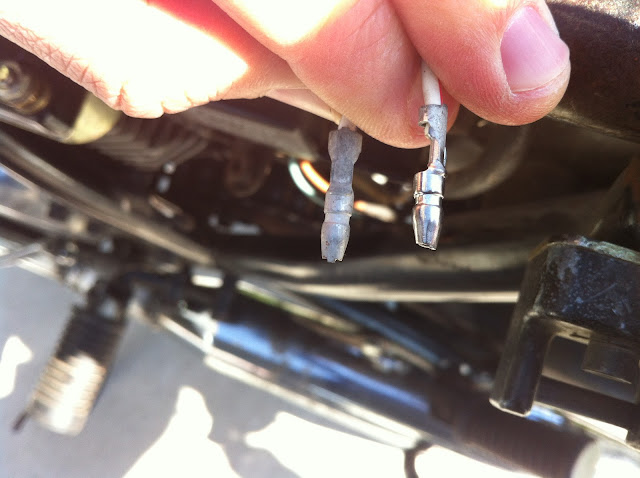 Yesterday I continued working through the diagnosing the problems with Oldbike's charging system. A few days earlier I checked the voltage at the battery with the multimeter and found that the bike was not generating enough voltage to charge the bike.  So I went through and checked connectivity between each of the connectors using the multimeter but beforehand I cleaned all the ends as you can see in the above picture.  I did notice that on some of clear rubber shielding that there were what looked to be burn marks some really bad like the on the voltage regulator/rectifier lead. 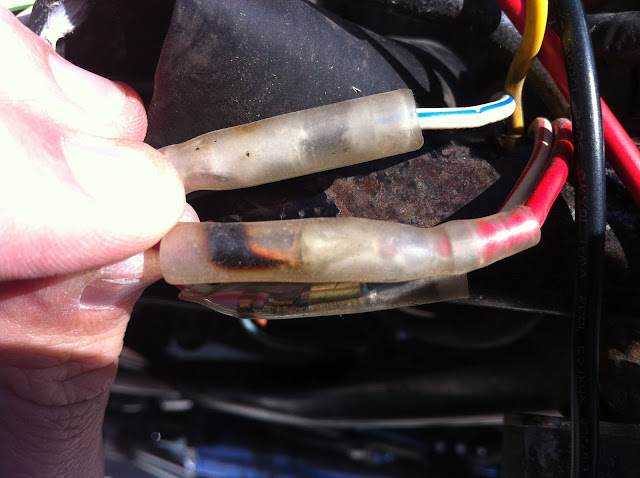 The leads on the two of the other voltage regulator/rectifier leads also had small burn-type marks on their shielding. 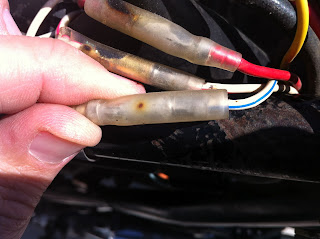 I made a video of all the steps of the test that I did so you can see the whole process that I worked through and the results.

All these steps are listed on a diagnostic sheet of "The Stator Papers" on GS Resources.

In the end it would appear that I have a bad voltage regulator/rectifier.  I called around and it would appear that there are two local shops that have a non-OEM replacement part for $100 and one of those places also carries used ones for $45.  I went to the one that had both and did the same test that you saw me do in my office on the rectifier with the same results on one that looked similar to mine off an 80 GS 425, all of the other ones were different sizes and from different hear GS models none of which seemed to pass the tests as listed out on "The Stator Papers."  He even let me test the new non-OEM one which seemed to not pass either.  At which point I began to wonder if I was doing the test right!  He suggested that I bring my bike over and that he would let me hook the used ones up to my bike and see if any of them worked which seemed like a great suggestion so back across town I went to get the Oldbike.

I connected the multimeter to the gas cap cover on the gas tank so I could see how the voltage across the battery behaved while I was on the ride there. 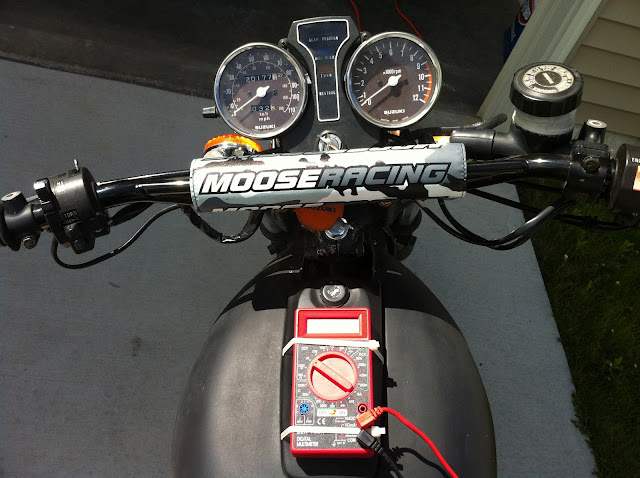 It's about a 15 mile ride one way and if I take the fast way it would be a sustained 60-ish MPH and about 20 minutes which I have never done on Oldbike before or it would be about an hour one way to take a street level route.  I opted for the fast way.  The bike performed fine but of course there were a few issues that came up.  I don't know why I didn't test this in the first place but I remember reading on "The Stator Papers" that one of the phases bypassed the voltage regulator/rectifier (something to do with people riding more with the lights off in Japan).  So on the ride over I switched off the lights and the voltage went from a steady 12.4-ish Volts to a varying 13.8-14.8 Volts which varied with the engine RPMs.  As of right now I'm not sure what to do with that information but I figure that is worth mentioning.  The other thing that happened was that another damn bolt vibrated it's way loose, this time it was one that mounted the headlight bucket to it's bracket. 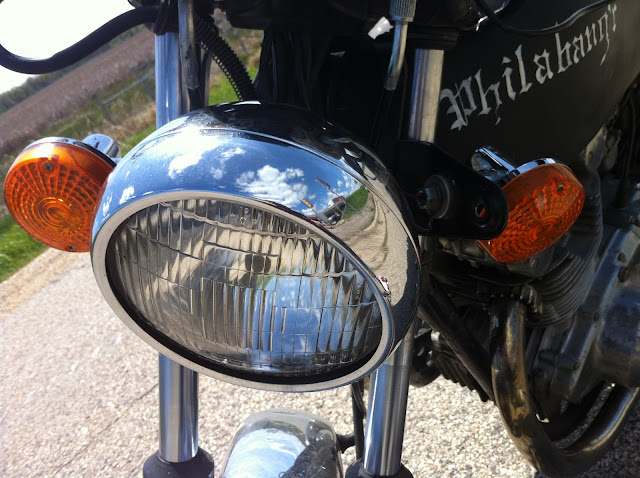 Luckily I noticed this and was able to grab the bole before it fell and pocket it.  I pulled off the road and finger tightened it back up enough to make it to the shop where they guys let me use some tools to re-tighten it properly.  Note to self: put together a tool kit for riding Oldbike.

The bad news was that none of the voltage regulator/rectifiers they had did anything to fix my problem.  I thought about buying one of the new non-OEM ones right then and there but it only had a red wire and a ground, the other three were all yellow and I wasn't sure if that would be right and wanted to bounce that off some forums first it seems to me that if the order in which the wires were hooked up coming out of the voltage regulator/rectifier that the OEM would not have been color coded (maybe I'm wrong).  None-the-less I decided that it didn't need to be done right away and I'd go in search of feedback first.  On that note that is where the project sits as of now she ran well at sustained speeds which is good news though riding on a three-lane highway on a 425 is not going to be one of my favorite things to do ever.  If any readers have any suggestions or feedback please comment below!

As always thanks for reading!
Posted by juanbook at 11:02