This update has a number of YouTube clips that basically detail what I found after coming home from the Easter weekend away directly after rebuilding the fuel tank petcock which I covered in my previous blog.  When I came home and got out of the car in the garage the first thing that I noticed was that the garage smelled like gasoline (not a good sign).  Upon further inspection I found that there was a slow leak from the petcock down various components to the floor.  The first video is a (somewhat tongue in cheek) word of warning on petcock rebuilds.


The best advice I can give you regarding rebuilding your petcock is to not assume that just because you put all new parts in that everything will be fixed.  That is the mistake I made the first thing that I did after rebuilding my bikes petcock is take it for a spin and then fill the gas tank.  THIS IS A BAD IDEA! You definitely want to make sure that the petcock is functioning properly before you do such a thing.  The next most important piece of advice I have if you do what I did and fill the gas tank and have a petcock that is letting fuel flow freelyor if you just find out that you have a leaky petcock for the first time; is to bite the bullet and empty the gas tank rather than try to remove the gas tank and tilt is perfectly so that the gas is not spewing out the lid or out of the petcock to do your work.

Yes, you still have a little spillage when you put the drain tube on the fuel fitting of the petcock but the mess will be much smaller. 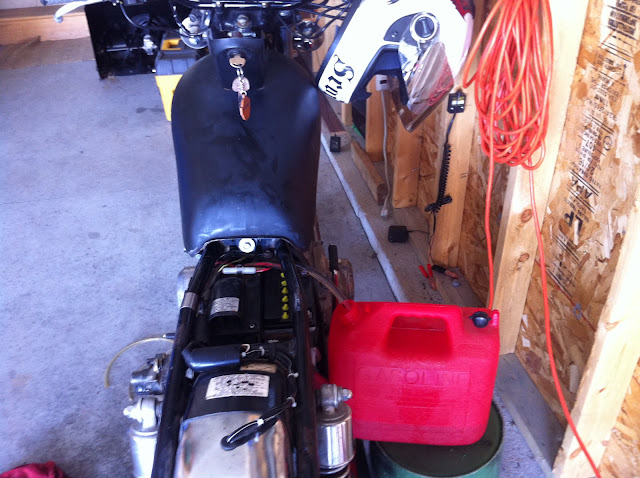 It’s pretty easy to see what I did in the above picture but to detail it out, I set up a 2.5 gallon gas tank (an important note is that the 1979 GS 425L gas tank does not hold only 2.5 gallons the full capacity is 3.7 gallons so plan ahead with two containers or on that will hole the entire contents) on a 5 gallon bucket on the right side of the bike so that when I rant the drain tube to the petcock that it wouldn’t have to make any hard turns.  You can see a closer look below. 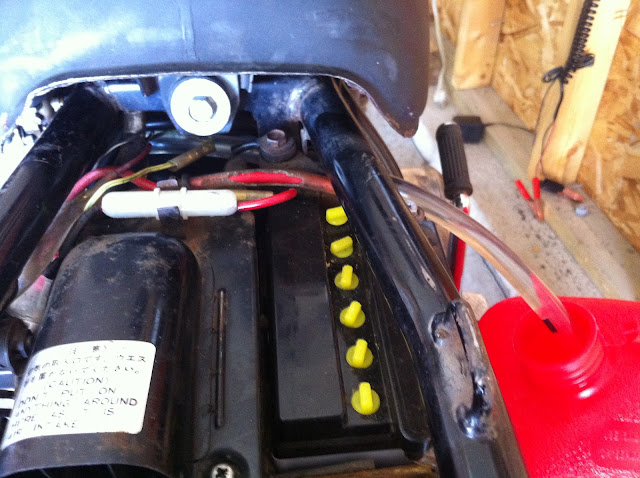 After spending some time letting the problem marinate I let decided that the only thing that I did not change when I rebuilt the carb was the spring and decided that it must have weakened over the last 32 years.

I talked to some of the old codgers at Motorcycle Performance who suggested that remove the petcock, take it apart again, use an eraser to burnish the contact points and the valve nipple, and stretch the spring that pressing the valve nipple into the contact point.  Which I did, after doing the work, I had to figure out a way to do test the work I did without re-filling the tank and making a huge mess in the process.  In the video below you can see what I came up with.


I put about a quarter of a gallon into the tank and set the petcock to reserve to allow flow from the lowest point in the tank results follow in the video below.

FAIL!  As you saw that did not go well.  True it isn’t spewing out as bad as it was before but that was about but that was with a quarter gallon in it if you think about adding another 3.45 gallons into it the amount of force being put on the valve with the added weight of the gas could have had it spewing out just as badly.  I decided to leave that sit and look into why the gas was coming out of the float bowl overfill tube on the left carb when the carb float should be shutting the gas flow off.

That meant taking the carbs out again, so off they came! 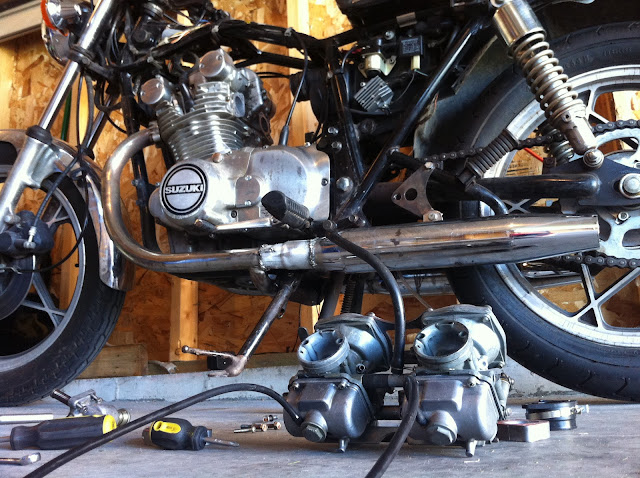 I basically run down the findings in the video below.  The surprise finding was that the o-ring between the spacer and the carb boot was sheared in a section, if I’m honest due to me being lazy and not fully removing the carbs before installing the gaskets and when I slid the spacers back into place the tight fit cut the gasket into two places.


When I took the spare set of carbs apart I found some interesting things, see below.

After getting the good float’s height set I basically put the carbs together and that was it for the day.  I needed to find a source for some intake boot seals and find a cure for the issues with my petcock before I could move forward.

Check back to see if I have any luck!  More to come soon!
Posted by juanbook at 23:55