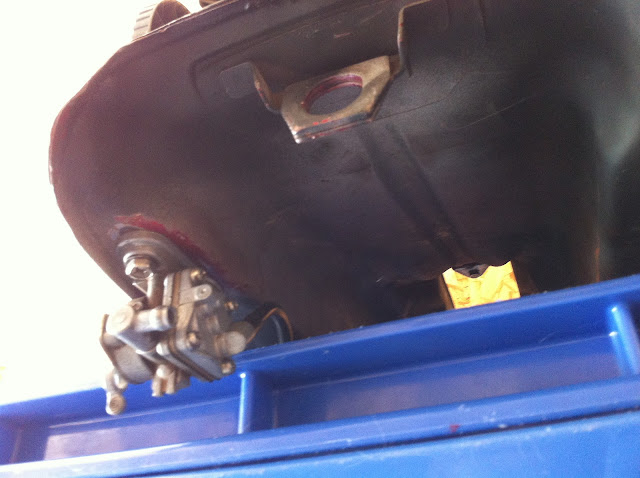 After the last update on the blog I called around and asked some places if they had a replacement petcock spring available for individual purchase, they didn’t and I got the same advice again, to stretch the spring back out along with a suggestion from the boys at Motorcycle Performance that I try a different o-ring for the vacuum plug (from a Kawasaki that uses the same style petcock) If anyone is interested I can look up the part number I have it written down.

Now I’ll start with the good news, I did get the petcock to work as prescribed and am no longer experiencing leaks, even with a full tank of gas!  The bad news is that I couldn’t tell you exactly what was causing the issue for me, I ended up doing three different things while I had the petcock apart and now I can’t be sure of which one really solved the problem.  If I was getting paid to do this I would take it apart and try each fix one at a time to answer the question fully for any other readers that may be having the same issue but alas I am not.  What I will do though is list off the three things I did countdown style starting with the least likely to have been causing the leaks and ending with the most likely.

3. The o-ring: Once I got the petcock apart, I compared the new o-ring to the one that came with the petcock rebuild kit and it was the tiniest bit thicker than the other one which I would imagine would move the contact point a little further up on the tapered hole where the valve seats itself possibly giving the spring a little more oomph to keep the valve closed.  I really don’t think that this was the solution to my problem it didn't hurt things but as you will see there are more likely candidates for the cause. 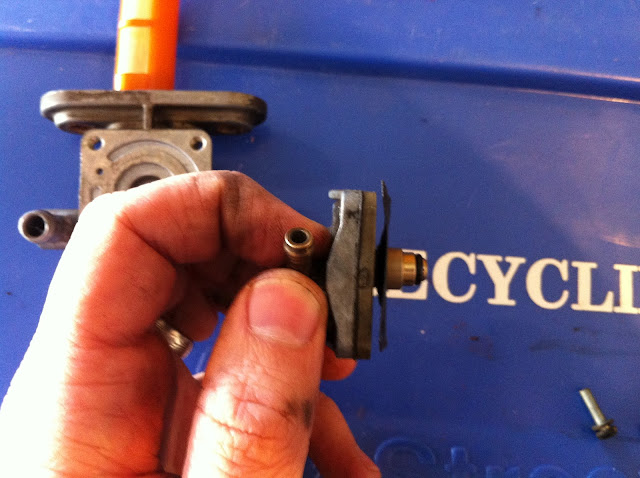 2. The Spring:  This could very well have been part if the issue and I could tell that after I stretched it again that I had gotten about 1/8’ more length on the spring and when putting the petcock back together the resisting force when I compressed the three sandwiched pieces together was a lot stronger than before but I still think that the last change was the real culprit. 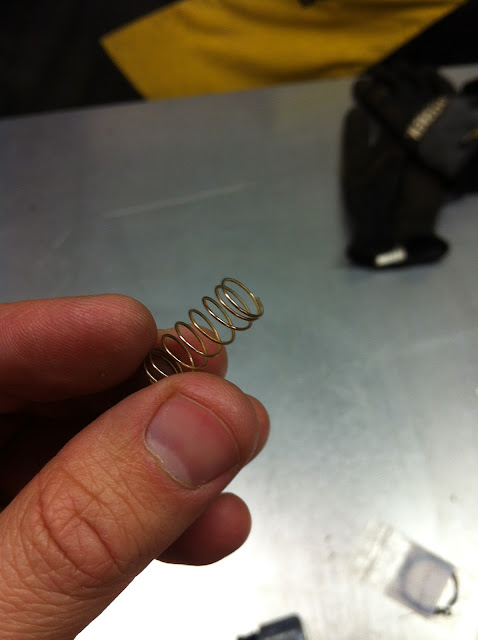 1. User Error: The one thing that I like to do whenever I am having a problem with anything is to talk it through with someone else, a lot of times you come to a solution just in the process of explaining the problem.  This was no different I brought the empty gas tank, the gas and my testing setup over to my buddy’s garage to see if we could make any headway working together on it.

I started out by talking through how I thought the petcock worked, we would look at each hole and see if we agreed on what it did and why and then move onto the next component of the petcock and try to determine the function of it.  Then we got to a tiny hole, it’s location is difficult to describe so hopefully the words along with the pictures will do a good enough job.  If you divide the petcock assembly into a front and back the front being the side with the switch on it and the back side of the petcock being the portion that houses the vacuum actuated valve we are dealing with the back portion.  Now in regards to just the back portion, that is broken up into three pieces the front sandwich piece (the main body of the petcock, the middle sandwich piece (the gray plastic piece that goes between the vacuum petcock diaphragms) and the back sandwich piece that has the vacuum tube flange on it). 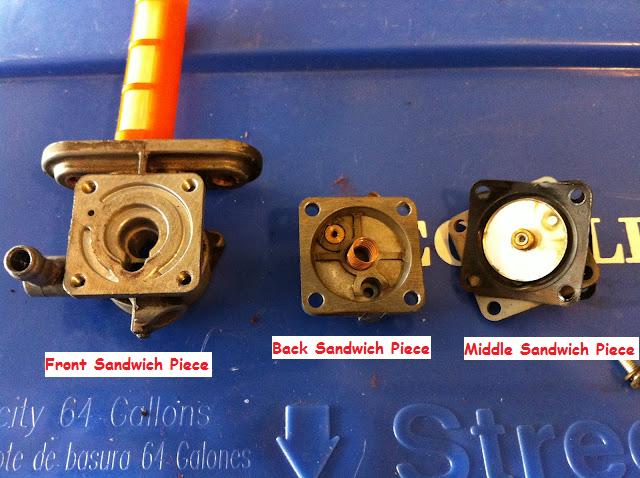 As we were looking at things we noticed a tiny hole on the front sandwich piece of the back portion of the petcock. 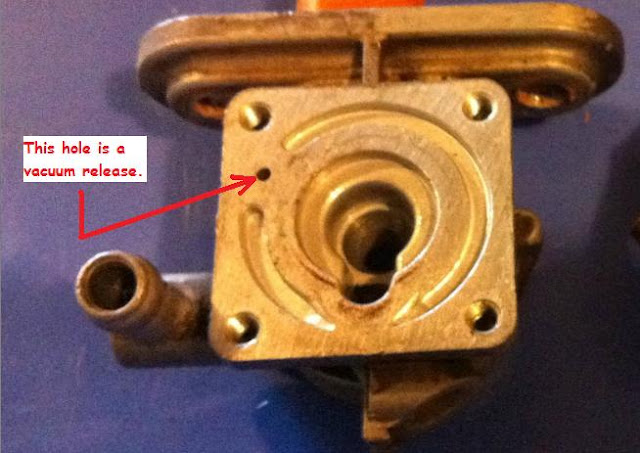 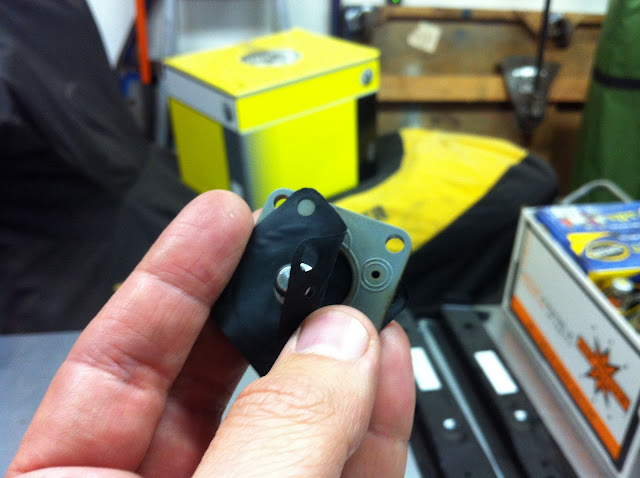 After some thinking (and drinking) we deduced that the holes made sense and that they were there to make sure that there was not a vacuum in between the two diaphragm membranes.  If there is the diaphragm will not move keeping the vacuum plug from closing and just letting the fuel come out at will.

The reason that fuel doesn’t come out the hole is all the tiny ridges that you see create individual seals that keep the gas in and allow the air to purge out from the between the membranes as they move in and out. 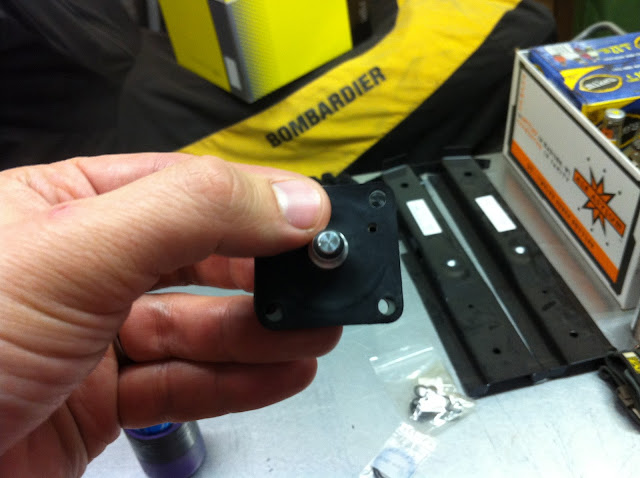 So after I aligned all the holes properly and stretched the spring and replaced the o-ring I re-assembled the petcock and tested it. 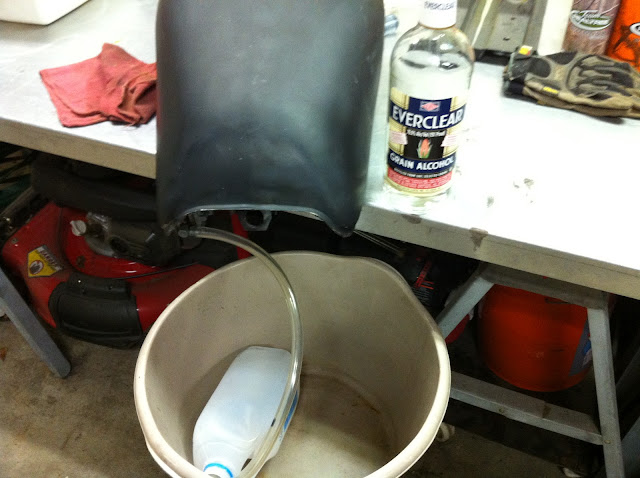 I started out just only putting about a quart of fuel in and when I didn’t see any leaks I out the rest of the 3 gallons in and we set about to the work of beer drinkin’ and smart talking and waited for the fuel to start leaking out… It never did!  I did put the petcock to prime and that did start to dump the fuel out and I also tested that when a vacuum was applied to the petcock the fuel also flowed out.  So I brought everything home and let it sit overnight and the next morning everything was still dry, a success!

Really it is kind of frustrating that I missed the alignment and the vacuum vent hole thing in the first place but I do have a complete understanding of how the petcock on Oldbike works now and when I go back to the original purpose of the project, to learn about working on bikes I guess even a mistake is not a bad thing.

I did replace all the vacuum tubes, overflow tubes and fuel supply tubes before I re-installed the carbs. 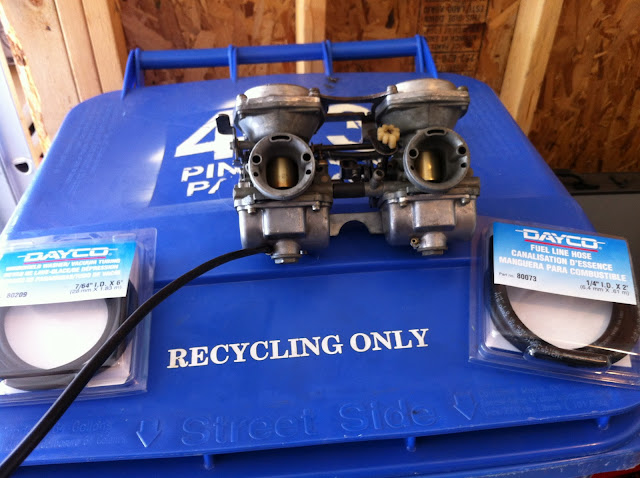 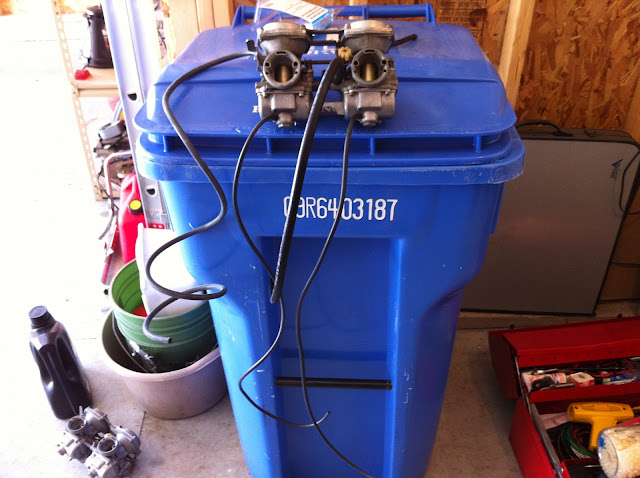 After I got the carbs back in I made a quick video detailing some of the things that I had learned as I have been taking the carbs out and putting them back in over the last nearly two years.  Maybe someone might find it useful.  You can check that out below!

Now that Oldbike is back on the road I started to identify little things that you wouldn’t notice unless you are riding the bike I will go through some of those things in the next post and one unexpected thing too.  I think that riding an old bike that hasn’t been run for a long time you will probably always find something wrong after each ride for at least a couple of years after getting it going again.

Thanks to all who are reading!  You can expect another update within the week!
Posted by juanbook at 16:15