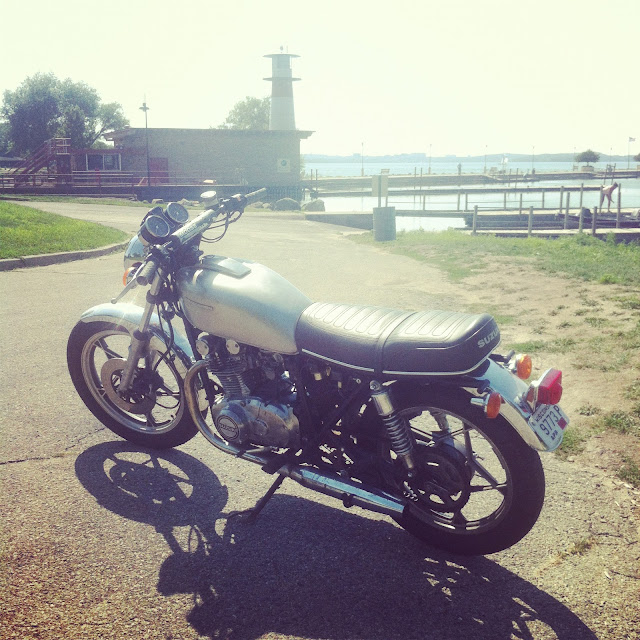 Hey everyone, sorry I haven’t been updating much this summer.  I’ve pretty much just been riding Oldbike around so there hasn’t been too much to talk about. 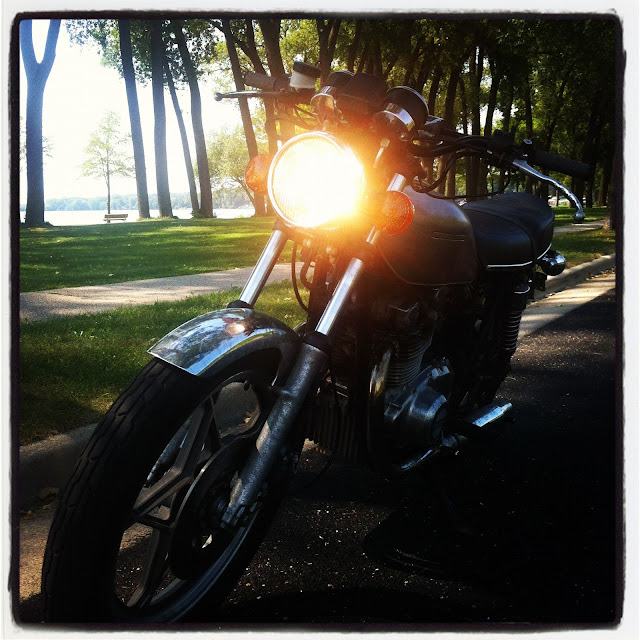 One thing that I noticed in as I have been riding around is that the front brakes were starting to feel spongy.  Realizing that I never really did anything with the brakes I decided that I should flush out the old brake fluid, bleed the line and see if that helps the stopping.  As soon I opened the master cylinder I realized that I may have been dumb to wait so long to check this.  Look at the coloring for the brake fluid! I’ve never seen brake fluid that dark! 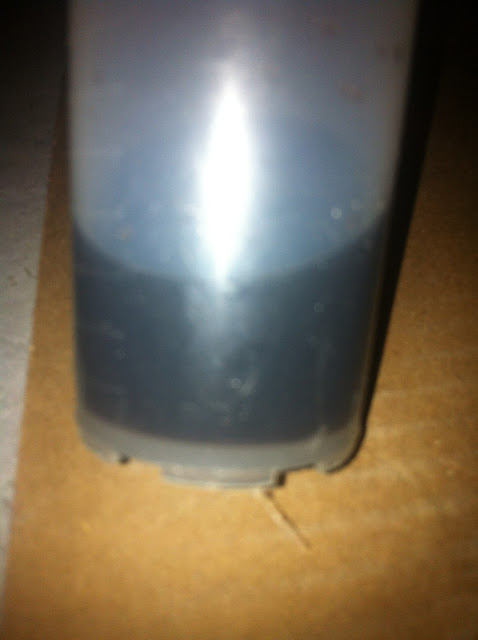 So I drained the fluid out of the system, using my MityVac… 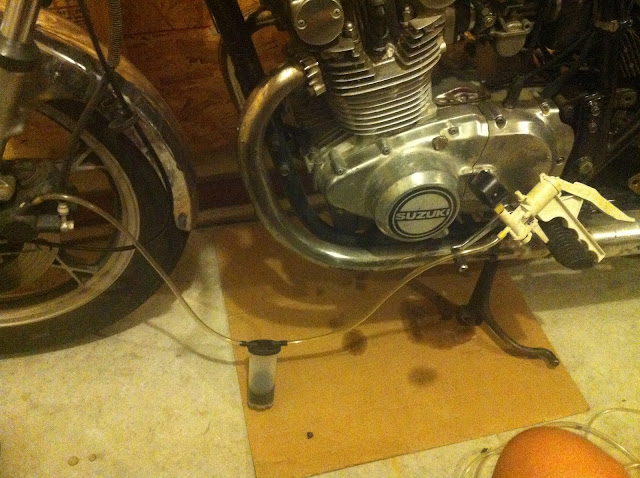 …it goes pretty quick when there is only a single brake caliper and brake line involved.  The inside of the master cylinder was coated in residue from the old fluid.  I didn’t take a picture of that but here is what it looked like after I cleaned it up. 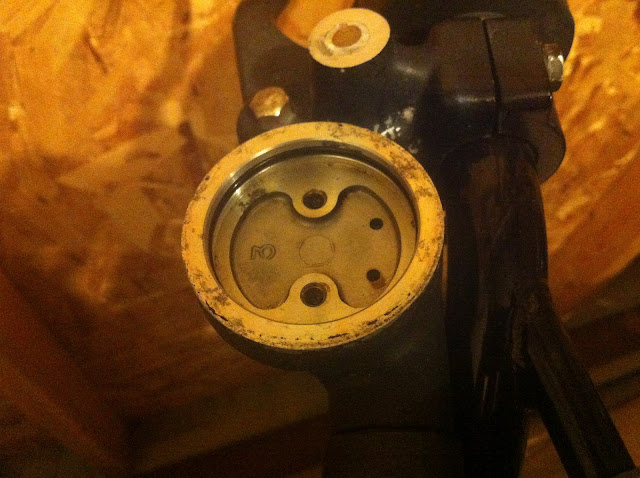 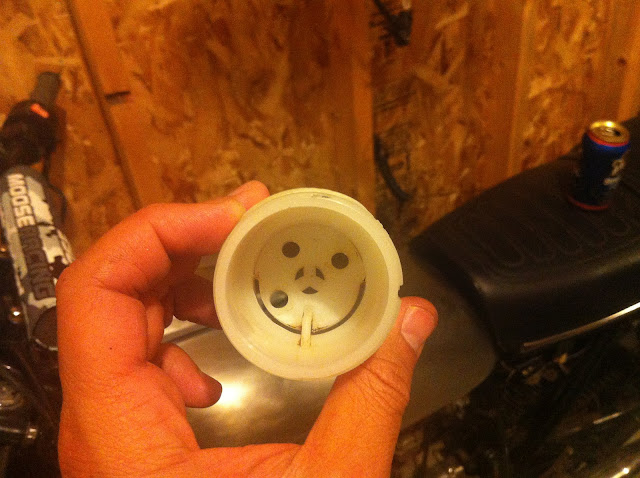 The rubber in the cap was in good shape. 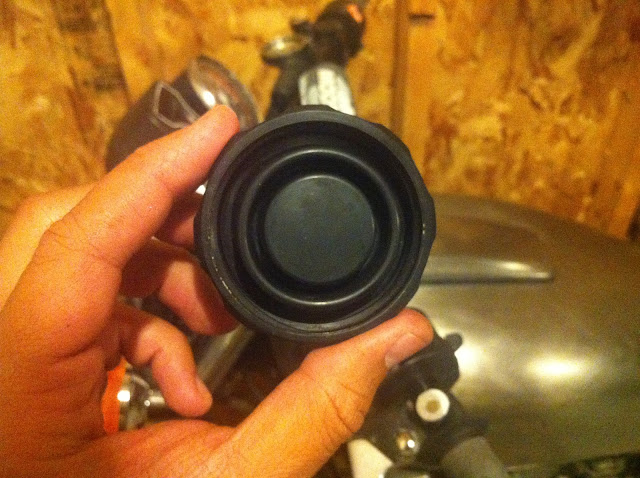 I flushed and filled the system with Valvoline Syn-power full synthetic brake fluid. 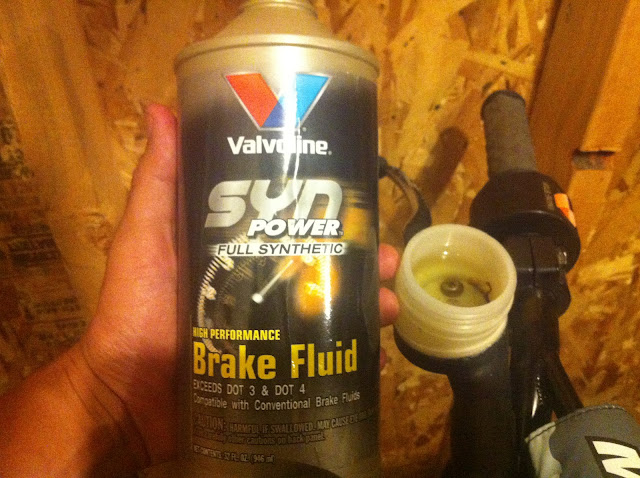 You can see in the background that this fluid is a million times clearer than the old fluid.  After getting my hands dirty with the brake fluid change I felt like doing a little more work.  If you remember earlier I had welded the exhaust system pieces together in an attempt to get rid of the exhaust clamps and completely seal the system from exhaust leaks.  At that time I left the welds raw and didn’t do any grinding on them, I had noticed some soot coming from a couple pinhole leaks where I had welded so I decided that I should finally get the exhaust off, grind down the welds and seal up the pinhole leaks. 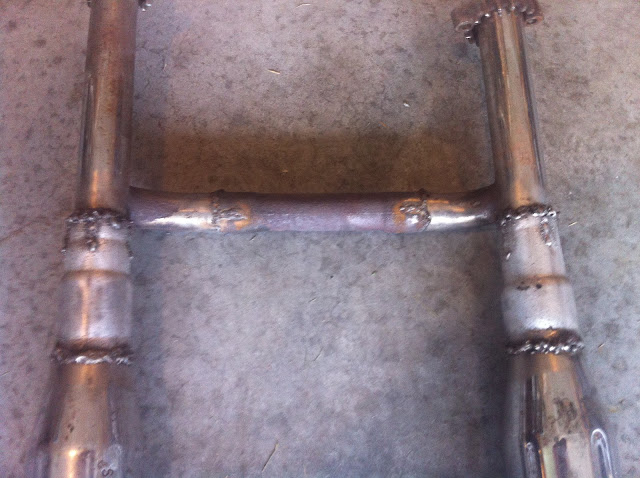 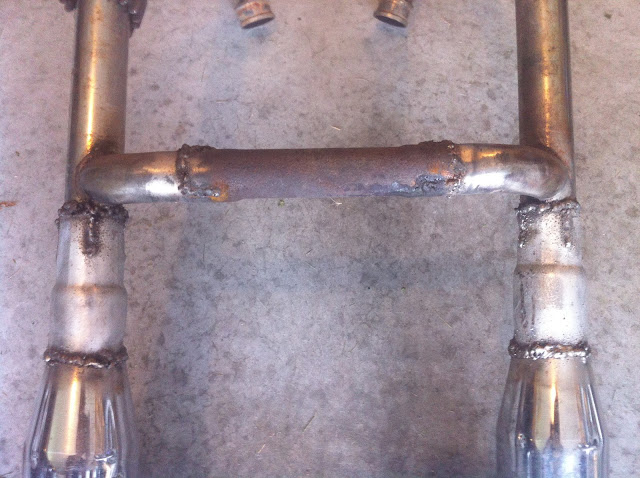 As I mentioned before that doing this makes the exhaust slightly harder to remove and install because you have to pull the headers apart to get them around the lower frame tubes in front of the engine but it is doable and I don’t have too much trouble with taking them off and on.  I just want to mention that in case anyone else decides to do this.  It was a lot of grinding to get the welds cleaned up but after I got them looking good I got the welder out and sealed two or three exhaust leaks and ground them down again.
The end result looks much better. 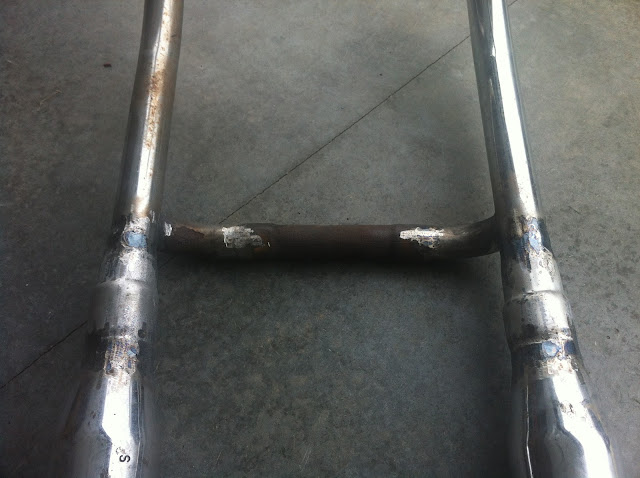 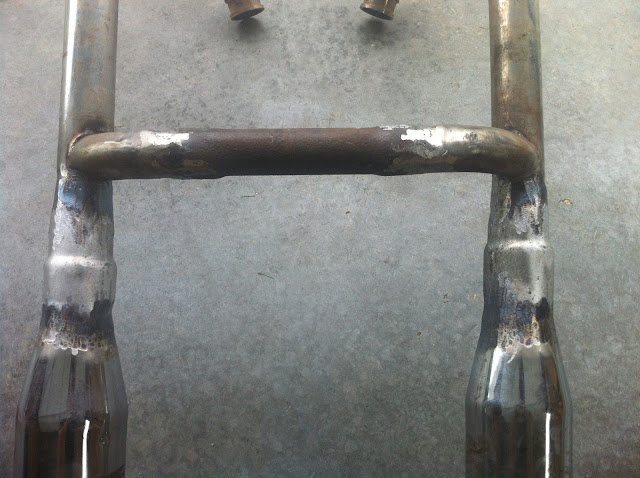 I am a point of conundrum with the exhaust system now.  It’s obviously still a cobbly exhaust setup.  It’s completely effective but I am trying to decide how much more time I want to dedicate to it.  There are spots that are rusty the chrome Harley Davidson silencers have some scrapes and scratches on them and so do the headers.  Do I want to try and dress them up even more cosmetically?  I could rough up the chrome and get the wire wheel after the headers and paint them with high temperature exhaust paint, but experience tells me that that sort of paint doesn’t stay pretty forever.  Should I just use it the way it is and if at some point I l find a good deal on a MAC 2 into 1 exhaust for it do that.  I’m still up in the air about that.  I definitely don’t want to spend a lot of money on an exhaust seeing as how this one is doing the job just fine.
The last thing I did to the bike was finally adding rearview mirrors.  These bar-end mirrors were donated to me from a friend and were originally on his Speed Triple.  The brand I believe is “Napoleon” and it appears that they are no longer made but the reviews are generally positive about them.  I have to admit that they have great visibility and they look good! 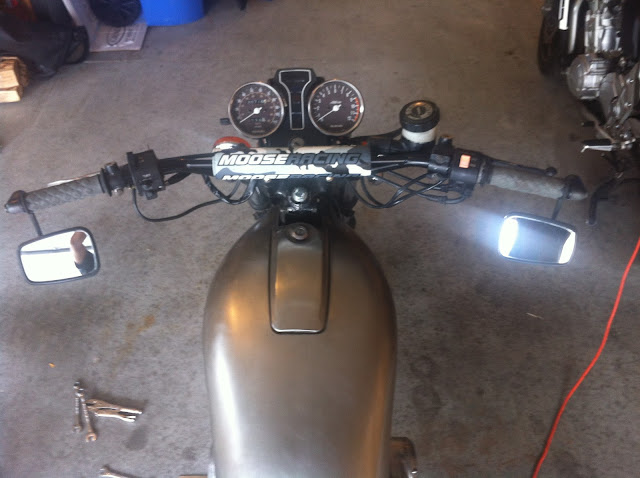 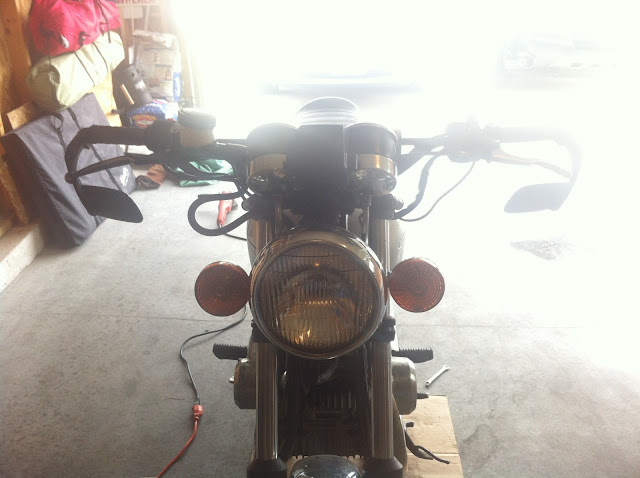 That pretty much should bring you up to speed with Oldbike.  I’ve put on over 700 miles on the bike this summer (all around town) and it have been very reliable now and ton’s of fun.  If I do more work on the bike before fall I’ll make sure to update here on tap for the winter will be a engine teardown and rebuild, should be fun!

Thanks to everyone for reading!
Posted by Unknown at 13:05