With Only A Motorcycle: An Ambitious Undertaking 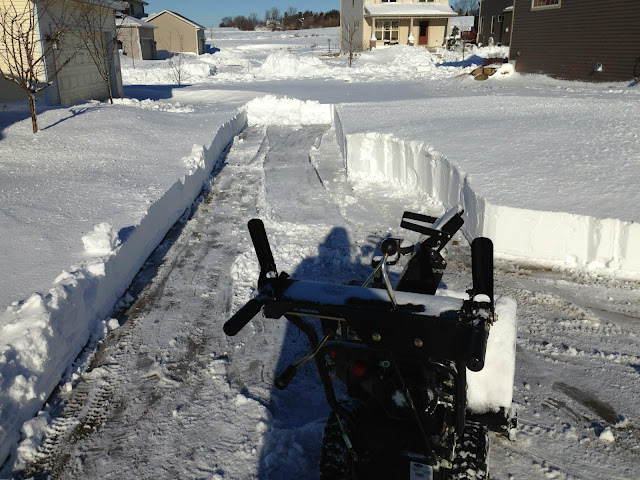 When you’re from Wisconsin if you’re able to deal with the cold, you can ride 9 months out of the year.  That’s not bad right?  Of course there is the oddball BMW ADV rider that will ride through everything including ice and snow now and again but for the rest of us, seventy five percent of the year you get to ride your motorcycle.  That’s not nearly as bad as owning a snowmobile or a wave runner is what I say to non-riders who really don’t see the point of owning a motorcycle.  But ask any true riding enthusiast living in the Midwest if seventy five percent is enough in the beginning of March and you are likely to be met with a sneer as he or she walks off grumbling about salt and dirt and the first good rain.  It’s at those times of year and this year in particular with it being the last day of March and there still being thirty degree days and snow still on the ground that a true moto-rider can be at his wits’ end.

Having gone through these doldrums for 11 years now as a rider in the Midwest it is with great pleasure that I accepted a job working as a Transmission System Operator for Pacific Gas & Electric at their Vacaville, CA control center (in The Bay Area).  Honestly, the deal was sealed for me the day after my face to face interview when I took my rental VW Beetle with just 56 miles on the long way back to Oakland starting at Highway 128 in Winters and connecting with Highway 121 into Napa.  That little jaunt on a 70 degree morning was all it took to sell me on California just before I flew back to the frigid Midwest.

It was in conversation with my wife (Anne) while I was visiting Vacaville that the possibility of me going moto-only first came up.  I was telling her about how at least in Vacaville that everything seemed to be surprisingly close to what things cost us here in Madison, WI.  I already knew through some research before coming out that the cost of living was only a few percent higher than Madison but the one thing that stood out was the cost of fuel.  In mentioning that to Anne she said, “Well maybe you can sell your car here and only ride your motorcycle when we’re in California.”  I have long justified the many motorcycle expenses with the fact that they are so much more fuel efficient than cars.  I was glad to know that she was actually listening to me all these years and I was glad to find out that we were on the same page.  It has been a dream of mine to not rely on an automobile pretty much since I had first swung my leg over a motorcycle.  Of course I’d be a fool to think that this will be an easy undertaking.  It gets HOT in Vacaville 108 degrees is a normal number to see there, and while it doesn’t snow (very often) it does rain a lot in the winter and at nights it can get down into the 30’s and with my job that involves rotating shifts I will be riding at night.  You have to have enough gear with you to be prepared for any sort of swings in the weather and the level of vigilance you have to have with maintenance of your ride had to be raised exponentially.  Just dealing with dressing twice every day will wear on me and dealing with “cagers” on a daily basis will try my patience.  I have no illusions that this will be easy I truly hope that in the end I will find that the positives outweigh the negatives.  Either way I want to share the experience with people who may be interested in giving it a try themselves.  There will also be plenty of commentary on the other aspect of this adventure; relocating to an area where we the closest family is 8+ hours away and where we really know nobody so hopefully there will be enough to keep you as the reader interested. 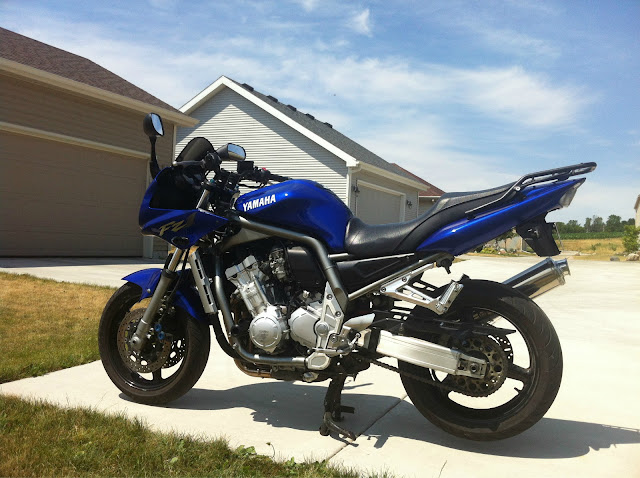 I will be bringing my current bike with me; it is a 2001 Yamaha FZ1.  It has just over 31,000 miles on it.  It's not worth much money anymore but it will be receiving a thorough once-over at the shop before it is pressed into duty as a full time machine.  This may be a biased statement but the FZ  is one of the best all-around bikes ever built but and I'm not so old that the desire to wick it up the corners has completely died just yet so I couldn't see myself skewing towards anything closer to a touring motorcycle.  Over the next few weeks I am hoping to sell my 2005 Buick LaCrosse, PG&E is going to ship my FZ to California, and Anne will driving her 2008 Saturn Vue to meet me in California in July.  She's a teacher and a professional symphony violinist so she wants to finish out the school year here in Madison and she also had some Suzuki Violin Educator training sessions already scheduled here in the Midwest.  The only tricky part about shipping the FZ is that they tell you that it can get there anywhere from two days (impossible) to 14 days after pickup.  This is PG&E's shipper not a moto-only shipper so they are used to shipping cars I think.  I initially was hoping that I could ship it early and have someone sign for it in so the bike would be waiting for me when I got there.  But the more they explained that the person would be signing away any recourse I would have should the signer miss any damage that occurred in shipping the less I thought that would be a good idea.  I don't know anyone personally in the Vacaville area that I could trust to sign off on that.  So the plan now is for me to ship the bike two days before I leave and avoid the chance of it beating me to California.  That means that initially I will be renting a car but that is the way it has to be.

So with all that settled I set about trying to find the best all weather riding gear and enough luggage to make existing with the motorcycle comfortable.  I already knew what the best all weather riding gear was; at least in my opinion it's Aerostitch's lineup.  The only thing is that it's expensive as hell.  Their Transit two-piece suit costs $1,794and the Roadcrafter one-piece suit costs $927 and let's be honest I couldn't justify spending that much on a suit when my FZ is only worth maybe $2500 tops.  So that became the guiding mantra for my riding gear search.  It had to be good but the prices had to be reasonable too.  Eventually I settled on the Tour Master brand; I have had previous experience with their gear and found it to be a great value for the dollar and very sturdy.  A day of web searches confirmed that their new products still live up to those same traits.  I ended up settling on the: 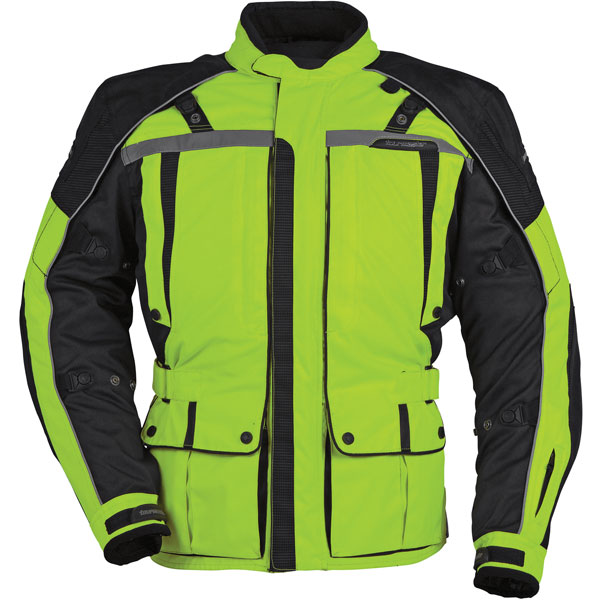 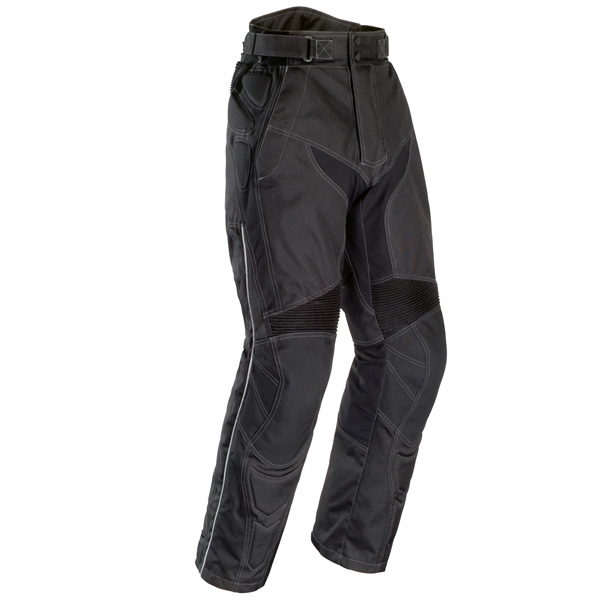 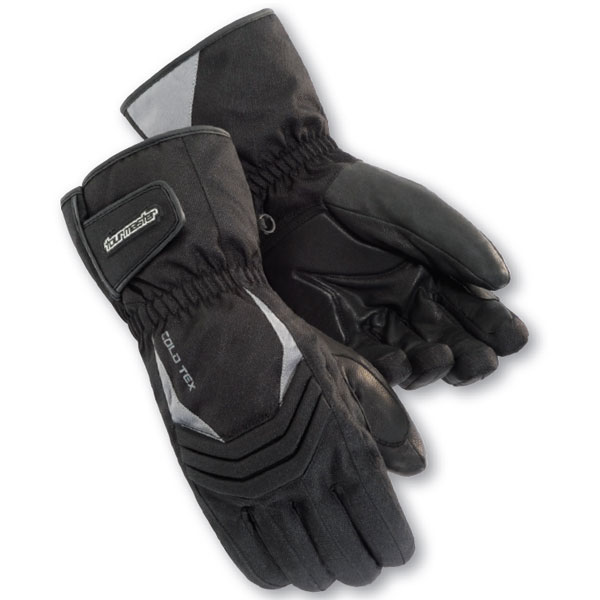 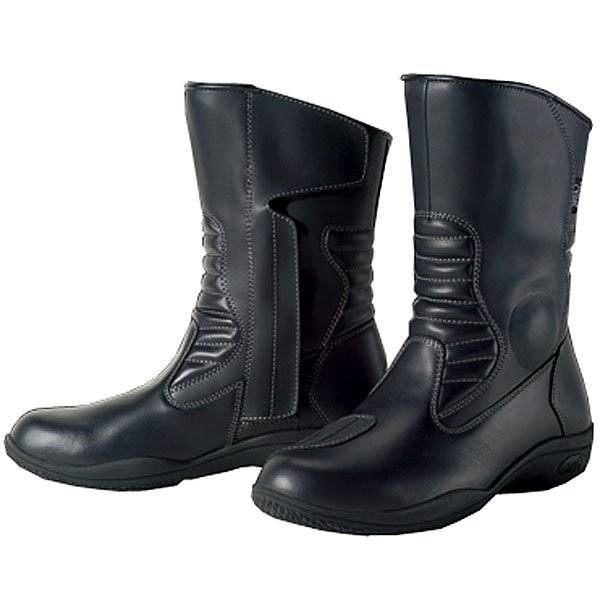 ...and the Solution Waterproof 2.0 Road Boots.

I will also be bringing a Joe Rocket Reactor Mesh Jacket in Silver,  non-gauntlet riding gloves and steel toe "work boots" for when it gets really hot.  I think I am going to look into some of the Kevlar reinforced jeans once I get out there too.

For the luggage I decided to give the Cortech Super 2.0 lineup a shot they are made by Tour Master so they have a good name behind them.  They aren't fully waterproof but they do come with the water resistant dust covers and I am planning on getting dry-bags for inside them as well.  They had great reviews and I like the idea that they aren't permanently attached to the bike.  I went with the; 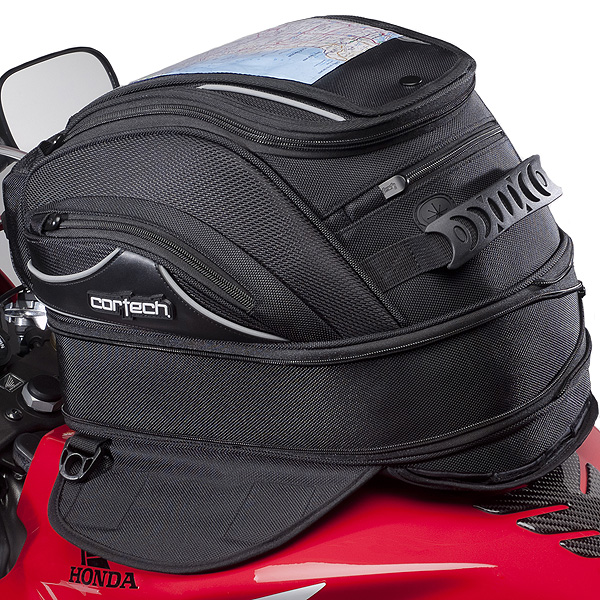 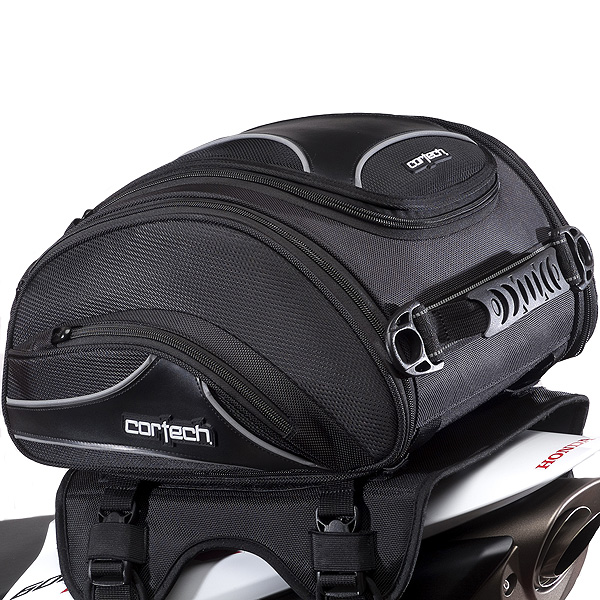 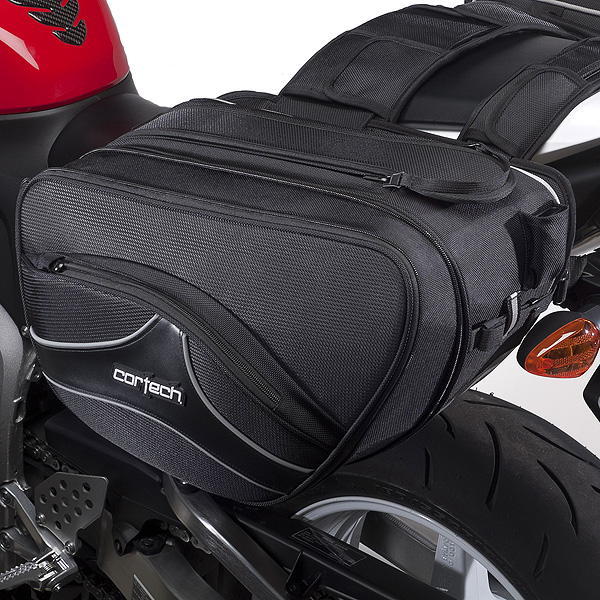 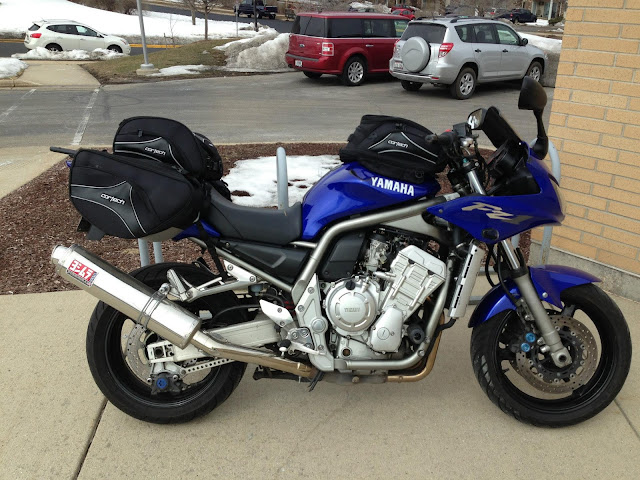 Here is a shot of the actual items I purchased mounted on my bike after the first test ride, temperature was 26 degrees.  These are all in their collapsed positions so the tank bag gets about 3” taller and the saddlebags get about 3” wider each and each side of the tail bag expands about 3” as well.  I am still looking for a solution to mount that tail bag back on the “luggage rack” so that I can have a passenger and the entire luggage at the same time.  If I’m honest the cargo capacity should be adequate but I would like to have a little more.  I could always add a backpack if I was going on a longer trip though. 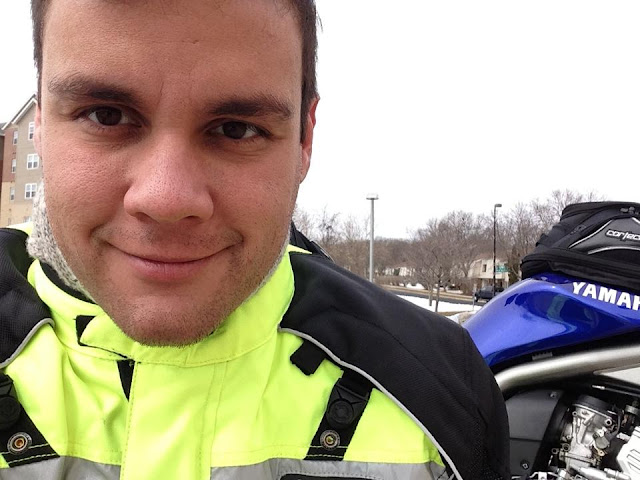 And here is a shot of me with on that ride; unfortunately I couldn't get a shot of everything.  All the new gear was quite warm you can see that I have a regular scarf on I may need to purchase something more geared to motorcycling as a small triangle of flesh remained exposed between the helmet and the scarf and that did feel the sting of the cold a bit.  But underneath the gear I only wore a t-shirt, jeans and some thin dress socks.  If I were to go on a ride more than a half hour I would have needed thicker wool socks as my feet started to feel cold (but not bad) at sustained 70mph speeds.

I think that this should serve as a pretty good intro for the blog and for me.  I hope that I’ll be able to provide some entertaining stories and some interesting insights along the way.  Thanks to anyone who stop by and read my words.  Stay tuned for the next update!
Posted by juanbook at 19:18 No comments: 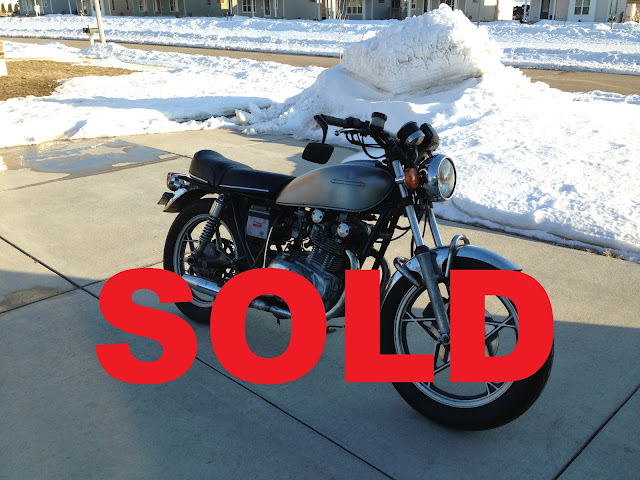 Hey everyone.  After a long winter of inactivity I sold the GS yesterday.  It was sad to see it go, but I am moving to California and it was going to cost nearly what it was worth to ship it there so I had to let it go.  Once I get things established in Cali I will be looking for a new project to start though.  Until then this site will stay up for anyone who would need a reference.  Feel free to ask any questions and I'll try and answer them from memory.  Thanks to everyone who has frequented the site over the years it has been a great experience writing for you!
Posted by juanbook at 23:20 No comments:

At the High Noon Saloon
Posted by juanbook at 11:07 No comments: 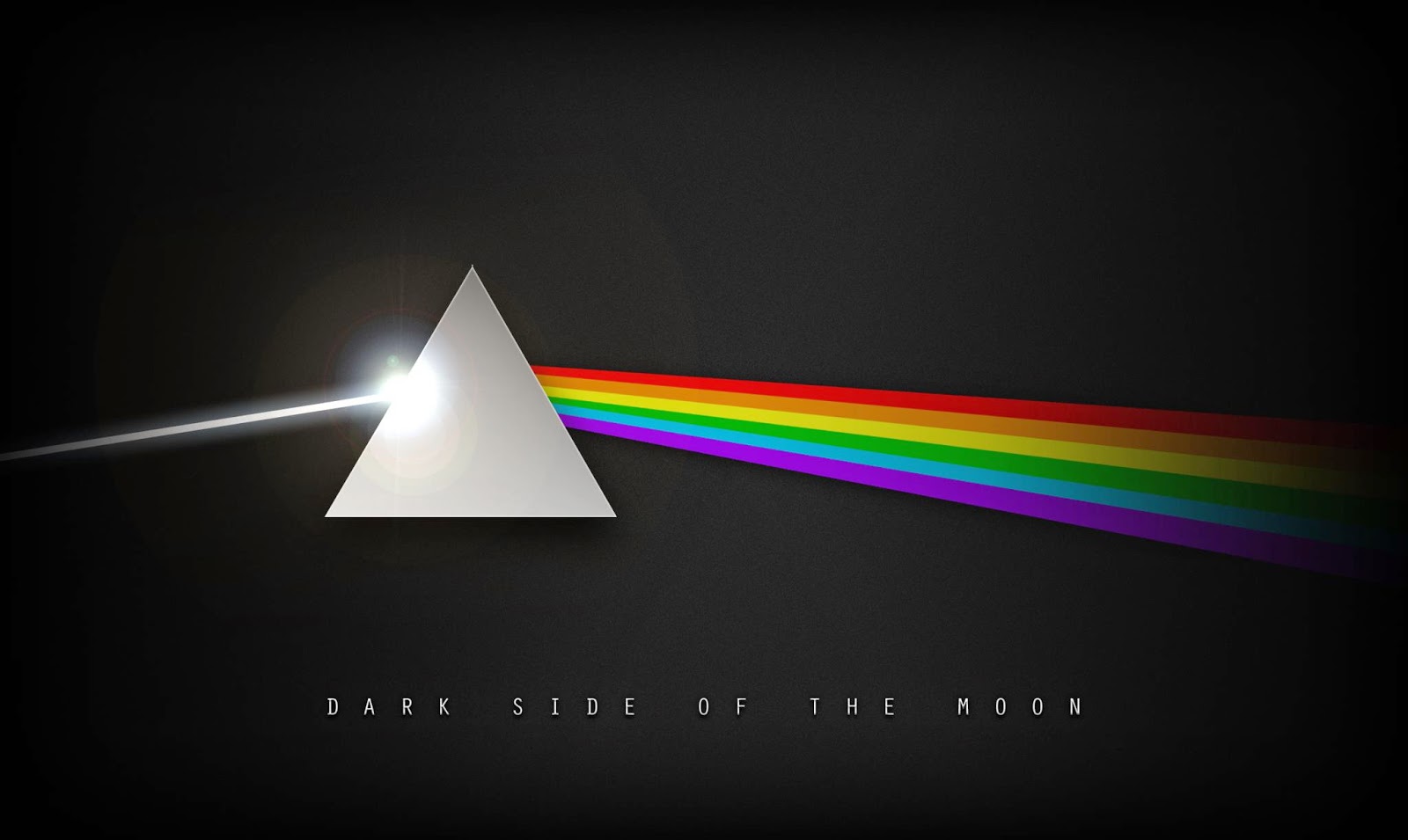 "The Dark Side of the Moon was an immediate success, topping the Billboard Top LPs & Tapes chart for one week. It subsequently remained in the charts for 741 weeks from 1973 to 1988. With an estimated 50 million copies sold, it is Pink Floyd's most commercially successful album and one of the best-selling albums worldwide. It has twice been remastered and re-released, and has been covered in its entirety by several other acts. It spawned two singles, "Money" and "Time". In addition to its commercial success, The Dark Side of the Moon is one of Pink Floyd's most popular albums among fans and critics, and is frequently ranked as one of the greatest albums of all time."