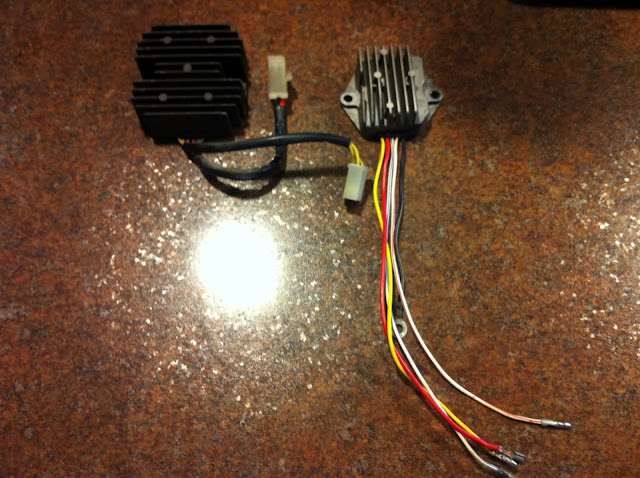 Once I figured out that I needed a new Voltage Regulator/Rectifier for Oldbike the first thing that I did was call a local shop have I had been mentioning in a few of my past posts to see what they had available.  They informed me that they did not have any used Voltage Regulator/Rectifiers available and the new ones that they had were $100.  After I called them I checked with a local motorcycle bone yard that I have been going to for parts, they told me that they had used ones for $45 and non OEM one for $100 (after testing their used ones I wasn’t able to get one to give me a good test to that option was out).  The next place I went to was another local shop that is doing their best to stay afloat and in the last few years hasn’t been carrying too much in stock and mostly order odd parts, so of course they didn’t have the part in stock but they were able to order the same non OEM Voltage Regulator/Rectifier for $79, so far that was looking like the deal to go with.

Until I went to an site tied strongly with GS Resources, BikeCliff’s Website.  He had the eventual solution I went with laid right out there for me.  He had a list of other manufacturer’s compatible Voltage Regulator Rectifiers, a tutorial on how to modify them for use on the Suzuki GS and even a tutorial on how to install them!  Using all this valuable information I found a used Voltage Regulator/Rectifier for a 1979 Honda Goldwing that would bolt right and work perfectly with a little wiring work.  I got it off eBay already tested good from a power seller (shipped) for $24.  For that price it was worth the risk of getting a bad one and the wait for it to get there.

Amazingly it arrived in two days! 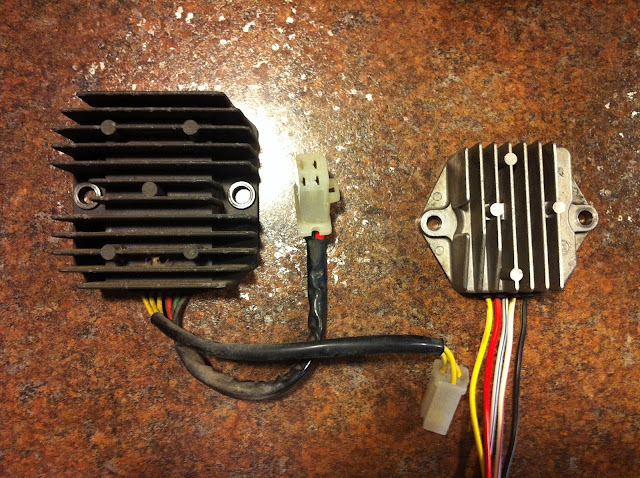 You can see (above) there is a size difference between the two (more surface area = more heat dissipation capability) but importantly the spacing between the two mounting holes and the size are exactly the same.  My came plan was to cut the wires off my old Voltage Regulator/Rectifier and re-use the stock bullet connectors.  Some people go through an extra step of putting new connectors on, I think that if you clean up the contact points and you get a good continuity test what does it matter? Electricity doesn’t care how old your connectors are.  Also, my soldering skills aren’t the best so I figured the less soldering I do on the bike the better.  The first thing I had to do was to get the Honda plugs off of the new (to me) Voltage Regulator/Rectifier.  Really I could have just cut the wires but I figured that some people might wonder how to get them off without cutting.  Basically you just something narrow enough but stiff enough to jam down into the end of the plug, below I am using a cotter pin, I have tons of them in my odds ‘n ends toolbox. 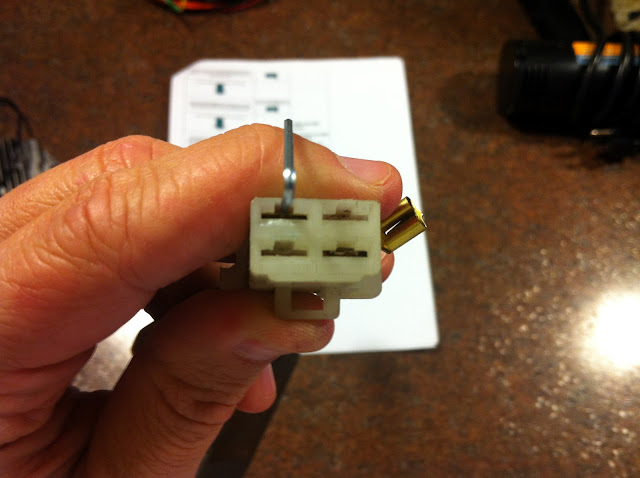 All you need to do is press your tool of choice where the notch is in the connector, that will press in the little tab that keeps the plug from pulling out of the connector and you can slide it right out.  Just like that you’re connectors are out! 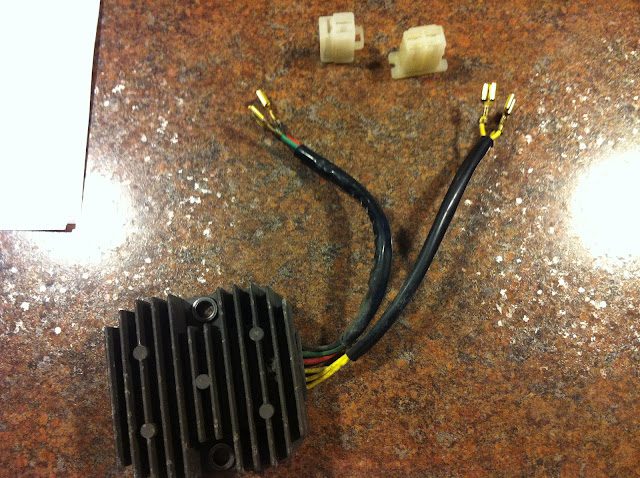 Then I went ahead and cut them off anyhow! 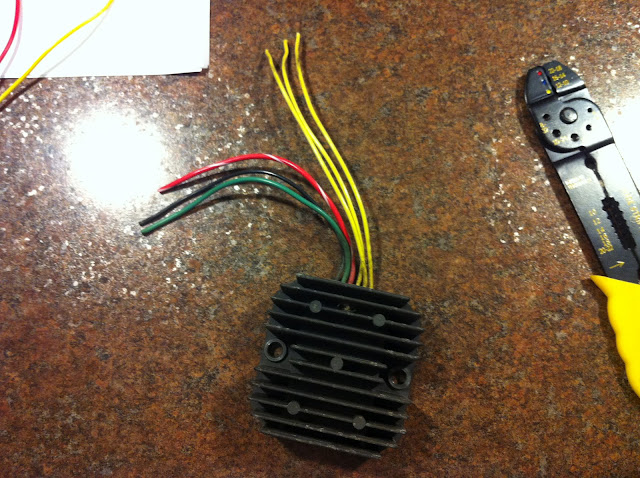 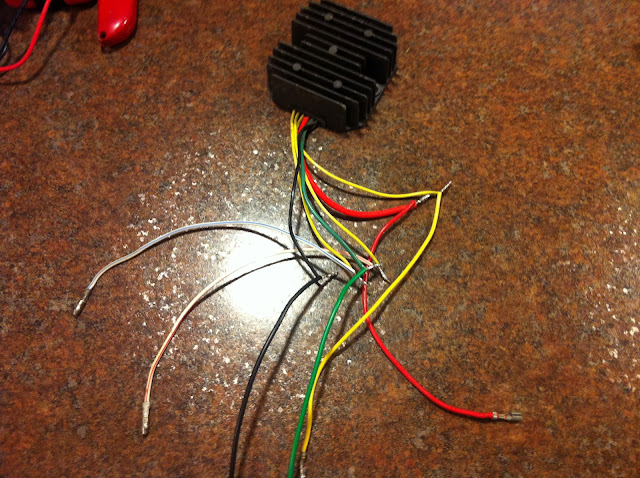 On the Honda the tree phases are all yellow, so you can pick and choose whatever of the GS phase colors (yellow, white/red, white/blue) go onto what yellow wire, electrically it doesn’t matter which one.  Another difference is that on the Honda part the ground wire is green NOT BLACK.  The black wire on the Honda part is a sensing wire, this can be connected to any wire that is always on when the bike ignition is in the on position.  The reason that it needs to be that way is that the sense wire tells the Voltage Regulator/Rectifier what the system voltage is at any given time, so if the bike start’s putting too high of a voltage into the electrical system the sense wire tells the Voltage Regulator/Rectifier and it lowers the voltage coming out of it. 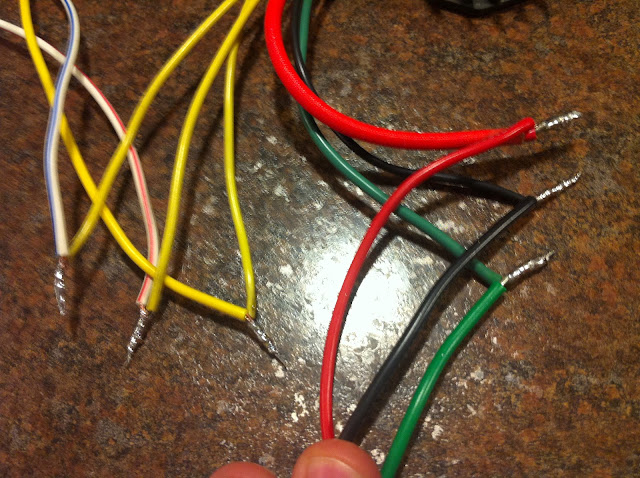 I also have a ton of different colored wire of different gauges in my odds ‘n ends toolbox.  And being that I was going to be running the (green) ground to the negative post of the battery rather than to a common ground (the frame) I soldered in a length of green wire more than sufficient enough to get the batter which I would trim once I had the Voltage Regulator/Rectifier installed onto the bike.  I did the same with the black (sense) wire. 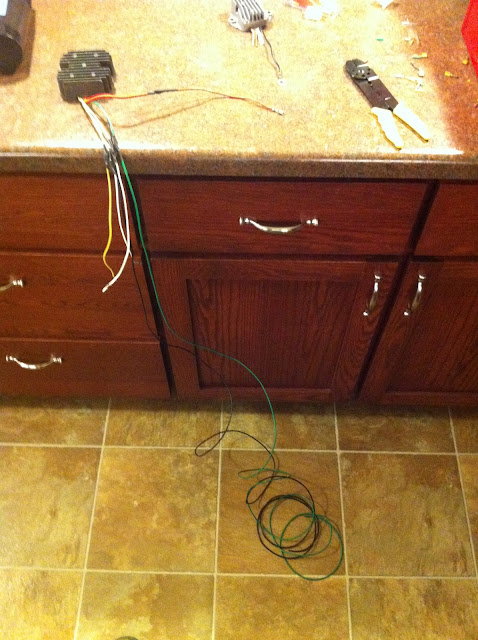 After all the soldering was done I took everything to the bike and mounted it on there. 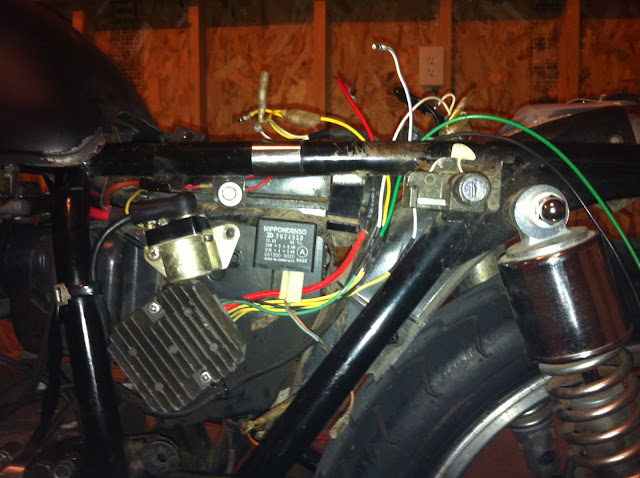 I made a video walking you through what I did which you can watch below.

All that was left to do was to test it you can see how that goes in the video below.

I have ridden it a few times since then and so far the highest voltage I have seen is a peak of 14.8V and with the bike warm and the battery fully charged it will put out around 13.0Vat idle I would say that is acceptable to me! Of course time will tell how this used part holds up hopefully it doesn’t burn up in a week and I feel dumb for not spending the $79 on a brand new non-OEM one!

Thanks to all who view this blog!  Stay tuned for my next post where I try to take Oldbike to the Slimey Crud Run next weekend.  If you don’t know what that is you can check the link!
Posted by juanbook at 07:21