With Only A Motorcycle: Shipping the FZ 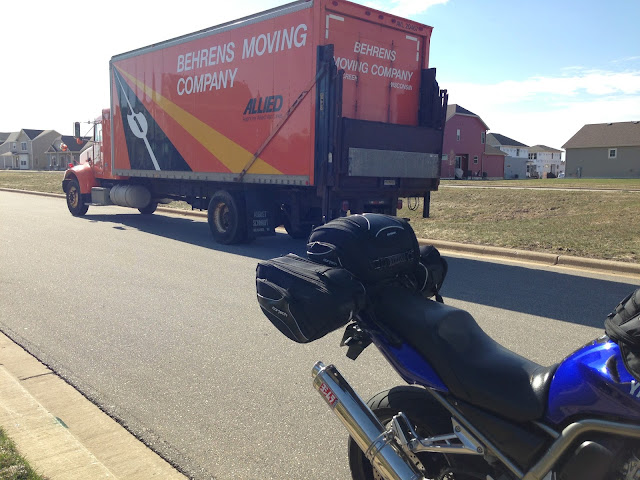 Where do I start?  It’s been hard to complain much about the relocation process thus far especially since everything has been covered by PG&E including the cost of shipping my motorcycle.  The relocation package had accommodations for the shipping of one vehicle to California.  Most times that would be a car because they are bigger and heavier thus more expensive to ship.  Anne had decided early in the process that she was going to drive her Saturn Vue to California herself so that meant that I would get to ship my motorcycle for free.  Maybe the fact that they are so bad at shipping a motorcycle has something to do with the fact that so few people ship motorcycles through their relocation program.  I did some preliminary investigation into shipping the bike myself before I knew for sure that we were going to have PG&E do it and I found that it was going to be $650-700 to ship the bike with a specialty shipper, who would take your bike and luggage as is and have it where you need it at the time you specify.  So here is where I get annoyed…

The company PG&E is using (Allied Van Lines) is DEFINITELY NOT the ideal motorcycle shipper if you need something right away.  And because like most big companies I’m sure; PG&E insisted on using “their shipper,” so I was stuck with them.  At first I thought it was going to be way worse than it was because they were telling me that they would not accept responsibility of anything in the luggage, only ship the bike with luggage attached to the bike (so no magnetic tank bag) and that I had to empty the gas tank entirely.  Shit like that matters when you have to take everything you need with you on a plane.  I didn’t have room for the stuff that normally sits in the bike and that I wanted to ship in the luggage. 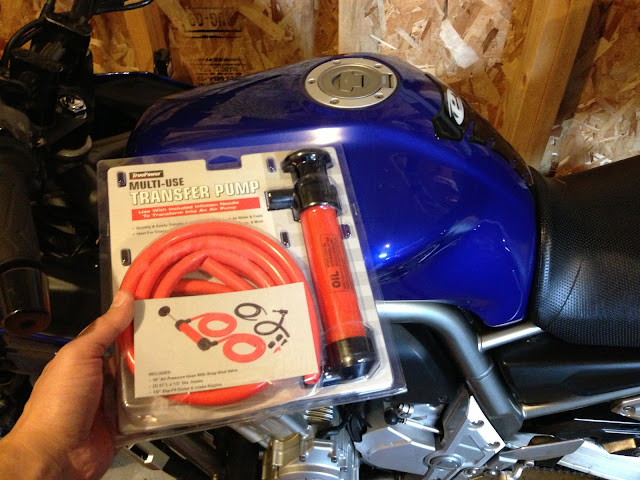 Luckily after talking directly to the shipper they said that I just needed to provide them with an inventory of what is in/on the bike and drain the tank down to 1/8 full.  That still seems dumb; isn’t gasoline vapor more volatile than the liquid?  Wouldn’t a full tank be safer??? At least I will be able to get the bike to a gas station without siphoning gas out of an unsuspecting car now.  But I do have the equipment now!

But still here is where the big gripe comes from; they picked up the bike on 4-16-2013 and my window for delivery is between 4-29-2013 and 5-3-2013.  That is because the bise is going to a distribution hub and waiting until there is enough other stuff to fill an actual semi trailer that is heading to the same place.  That is ridiculous and borderline unacceptable.  With the car rental I am going to have to pay for until then I may net a $100 saving vs. shipping the bike on my own with a specialist shipper and I’m willing to bet that Allied Van Lines is charging PG&E more than the specialist shipper too. 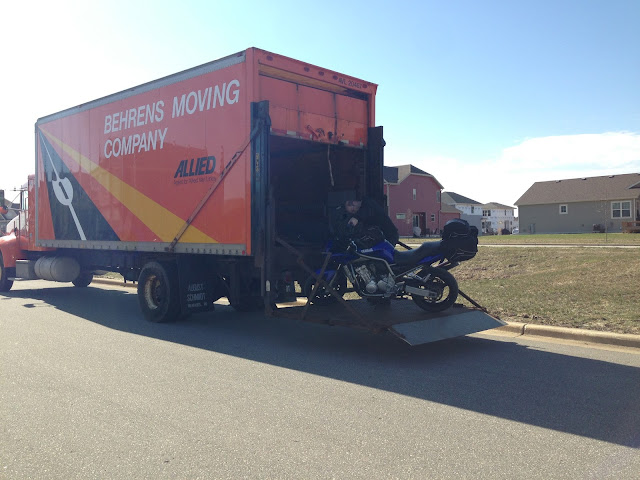 Okay, enough bitching about principalities; let’s move on to the good things that I can say about the shipper.  They guy they sent was specifically charged with picking up motorcycles and only cycles and it showed.  He did know his stuff and he did a thorough walk-around and marked all the imperfections.  Actually, looking at all the marks on one sheet of paper made me feel like I need to do some work on cosmetics. 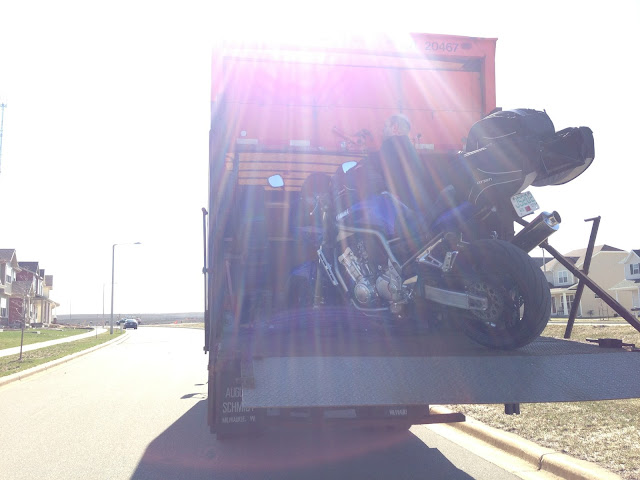 I’m not sure that I had mentioned earlier why I didn’t just have them pick up the bike earlier.  Well the reason for that was that they said that the bike could be delivered anywhere between 2 and 14 days after pickup.  I could have had it shipped to the Extended Stay America where I will be but whomever signs the form takes the responsibility for final inspection of the bike and releases the shipper of any responsibility for damage so I wasn’t about to leave that up to someone I had never met before. 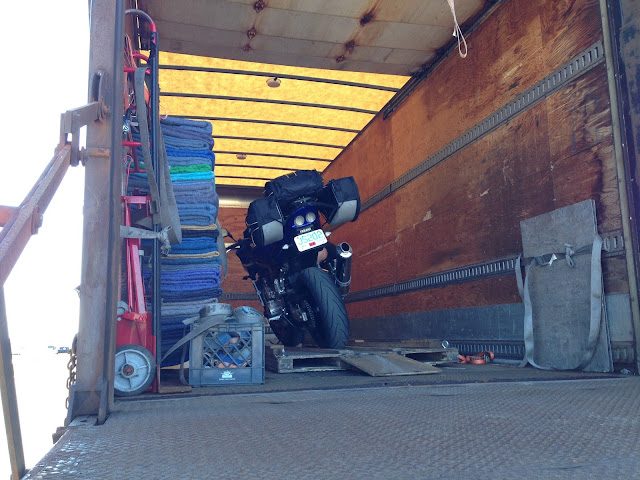 Either way the bike will get to California when it does and at that point the real adventure will begin!

Now I said that I would be adding some other content about the move and some lifestyle-transition-type stories so I’d like to add the first one of these at the tail end of this post.  So whenever you move you end up wanting to throw a bunch of stuff out.  One thing that I have been lugging around for YEARS are old hard drives; one I know for sure has been with me since 1998. 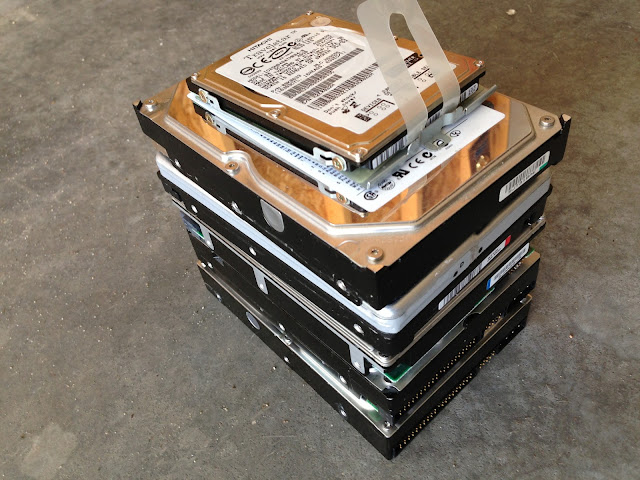 For the life of me I couldn't tell you what is on some of them but I have always been paranoid about throwing them out and an identity thief taking advantage of that.  They say that it's not enough to reformat a hard drive as a savvy identity thief could still fish the data off of a disposed hard drive.  Ideally what you need to do is fill the hard drive with garbage data and overwrite all your sensitive information. I didn't have the software or the time for that so I decided to (finally) render them useless with my cut-off wheel.  Enjoy the video! 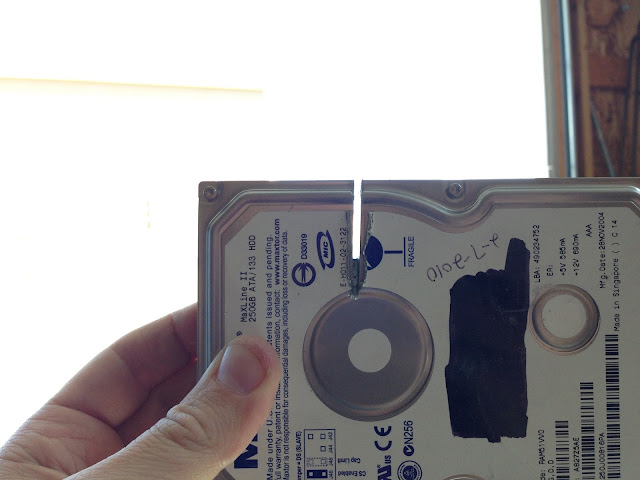