With Only A Motorcycle: San Francisco Ride Report

I decided that this weekend that I would ride into San Francisco and do some urban exploring.  I figured that might be a better idea rather than venture out on the “B” roads and sharing them with the holiday weekenders.  My main destination I picked out was Baker Beach, it would give me the opportunity to ride some of the bridges in leading in and out of the city and do a little exploring as well. 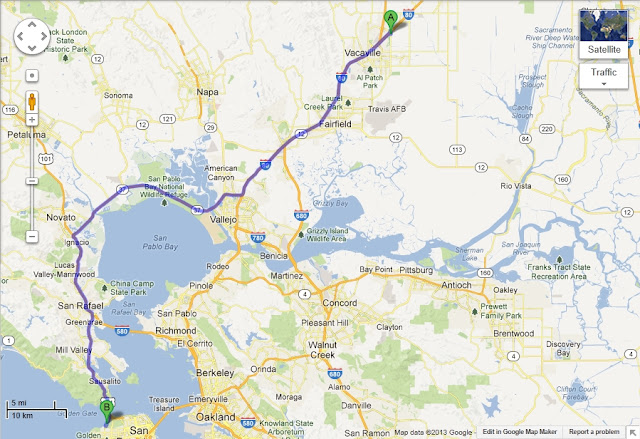 Crossing the Golden Gate was anticlimactic the fog was so thick that aside from seeing the cables on either side of the road it was just another ride on a road.  I couldn’t see anything over 100 yards away.
When I was looking for the entrance to Baker beach I got a little sidetracked and found myself at Battery Godfrey   I had read about the coastal guns at some point so it was cool to see one of them in person. 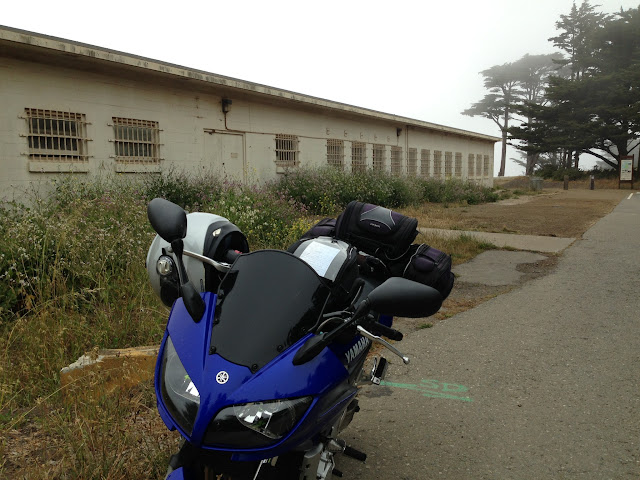 Temperature-wise it was pretty cool up at Battery Godfrey I was glad I wore the Tourmaster Transition jacket and not the Joe Rocket Reactor mesh jacket.  When unobstructed by the low-lying clouds there is apparently a beautiful view of the Golden Gate Bridge from this location. 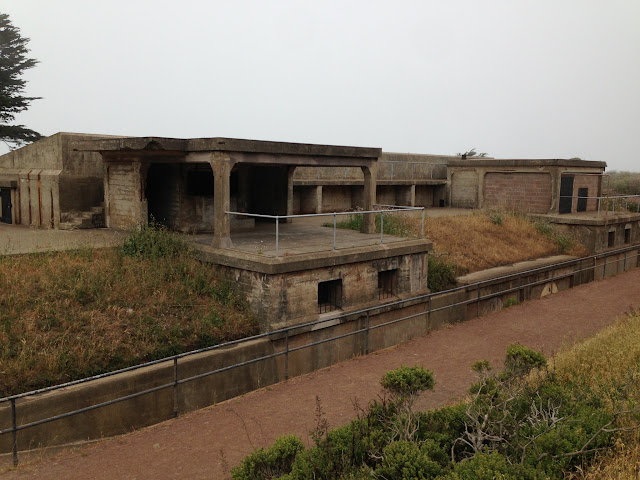 Here is a shot of one of the bunkers to the left is where one of the guns was mounted. 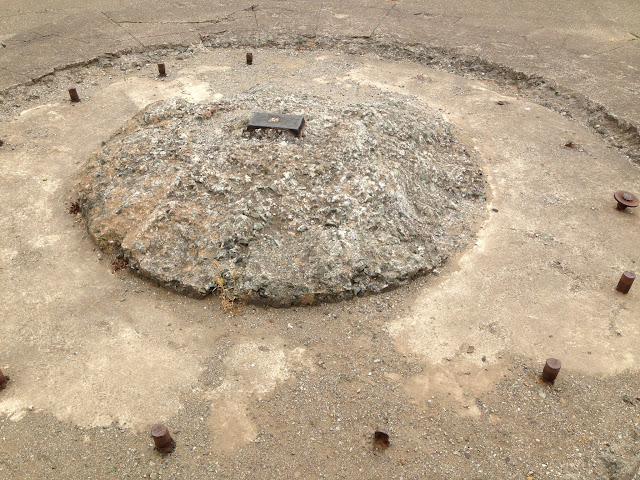 You don’t really get a sense of scale here but this mount is around 5 feet in diameter. 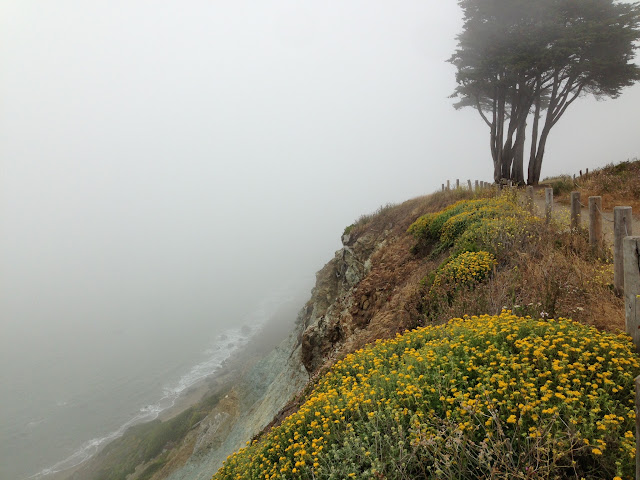 The view down the cliff was impressive, check out a short video I shot below. 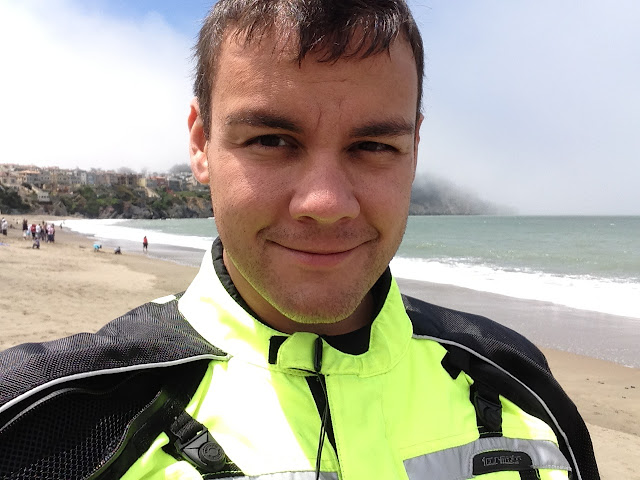 I eventually made back downhill to the beach, I had brought some shorts to change into in case it was warm enough to chill at the beach for a bit but I was comfortable enough in my riding gear walking around and taking pictures. 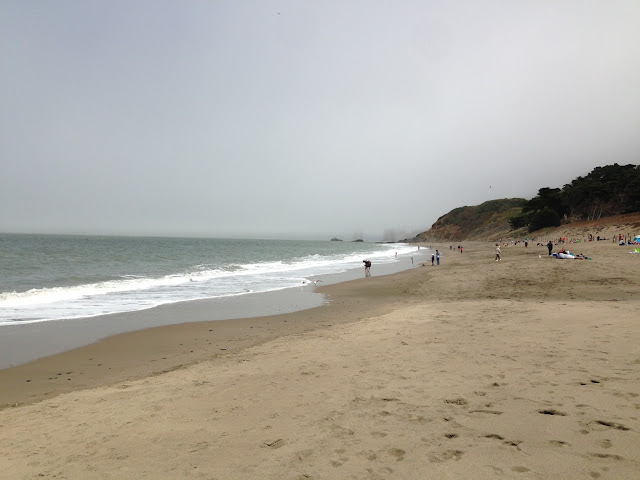 I did get a shot of the Golden Gate bridge (sort of) you can see the footings of one of the bridge towers in the background. 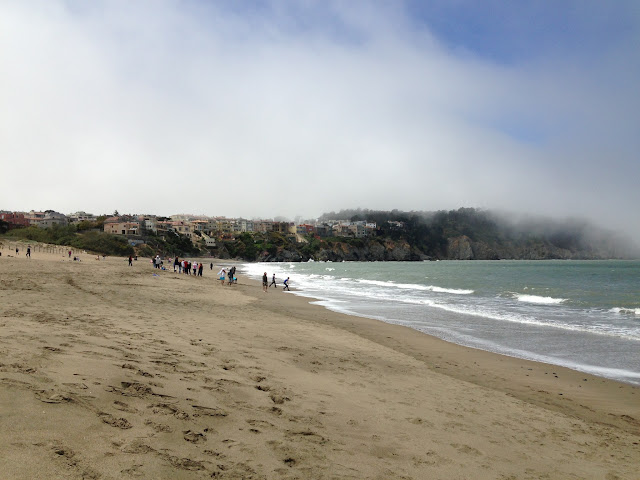 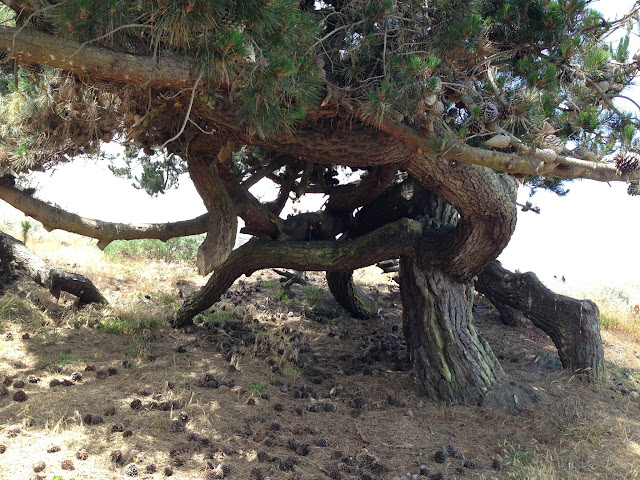 After all that cool weather I was ready for a little coffee so I searched on the iPhone for a coffee shop and I was getting a little hungry too. The Blue Bottle Coffee at the Mint Plaza Location had some great ratings so I headed there. 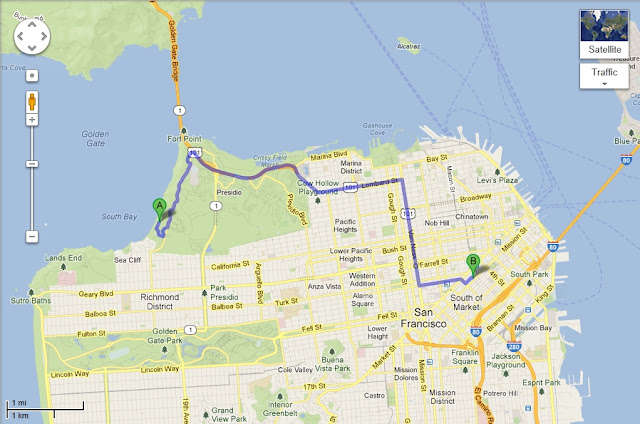 There was motorcycle parking right outside the plaza unfortunately I only had thirty cents in loose change so I had to plug the meter with what I had and run into the shop and get some change.  There was quite a line but the staff said it would be cool if I went up and just grabbed some change from the cashier.  I plugged the meter and got in line.  It took about 10 minutes to wait in line which went out the door and wrapped around the building.  The décor had a theme to it but the café was pretty crowded and people were not filtering out quick enough to afford everyone a spot.  I lucked out and got a seat right away though.  I sampled their Espresso along with a Grilled Cheese Served on Acme Sweet Bread with Beemster Cheese, Ham, and Piquillio Pepper & Grain Mustard.  The Grilled cheese was outstanding and just what the doctor ordered.  The shot of espresso was intense which I liked but it was small.  Normally I like to chill out at a at a Coffee Shop but this one was so busy I packed up and headed out as soon as I was done with lunch.  I decided to take The Bay Bridge out of town and stop off on Treasure Island to take in some of the sights. 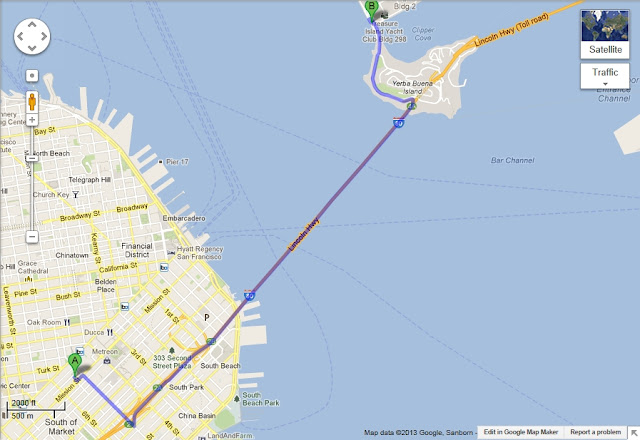 Crossing the bay bridge was more gratifying, even though you are covered by the top deck when you are leaving the city the views off to the left and right were pretty breathtaking.  Traffic moved pretty reasonably on the bridge so lane-sharing was not necessary which I had read some interesting threads on the Bay Area Riders Forum or BARF; regarding commuting on this bridge. 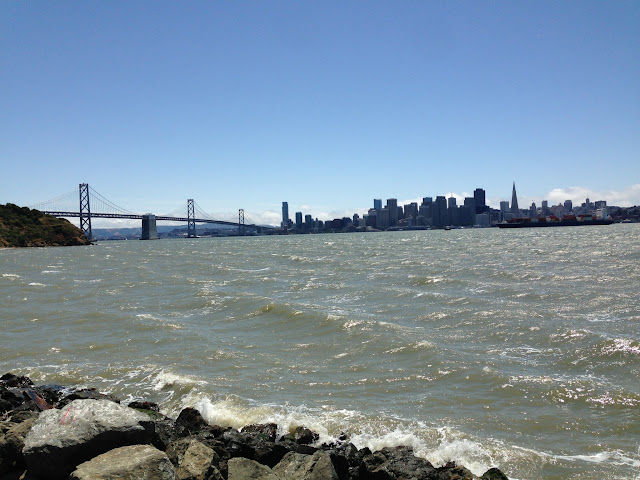 Here is a shot of the bay bridge and San Francisco. 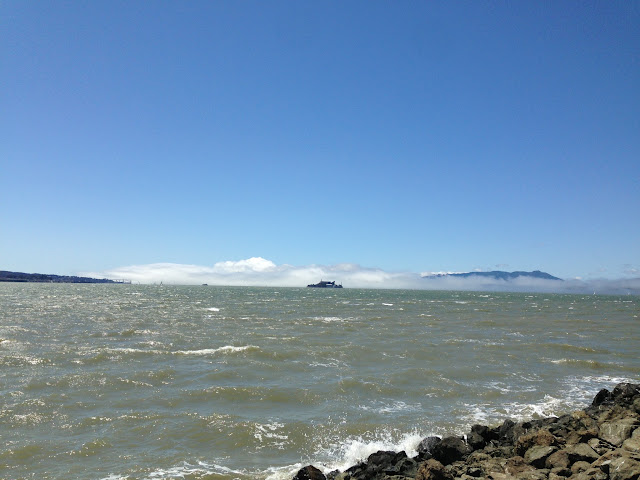 A shot of Alcatraz.

A nice panorama including both. 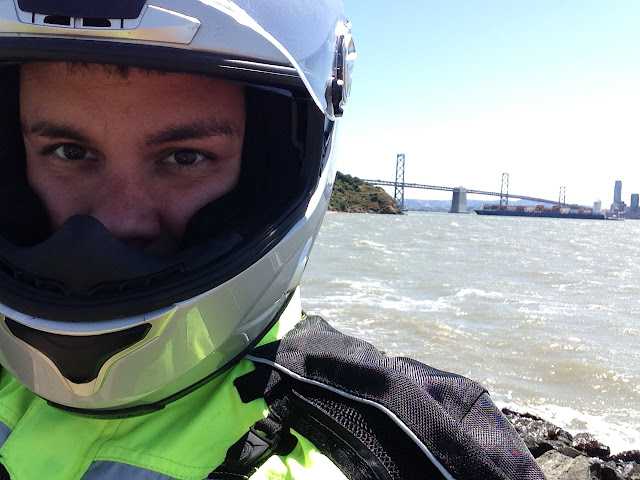 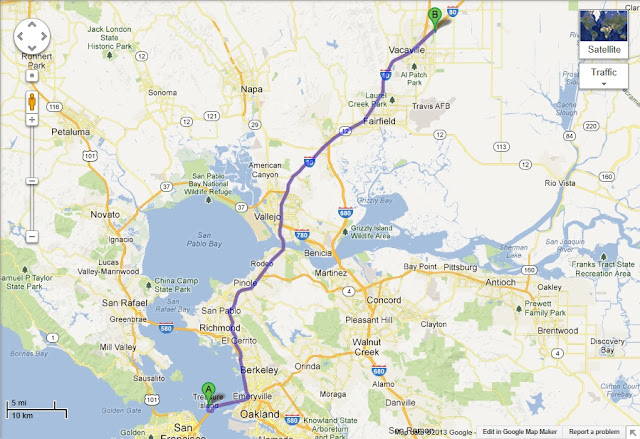 One thing that I am still getting used to is the buffeting you take when you are riding along the interstate.  In Wisconsin on the Interstate traffic moves around 70-75mph.  Here the fast lane travels at around 80mph or faster.  Apparently my body isn’t used to that sort of sustained buffeting yet and adding crosswinds to the mix by the time I got home I was pretty beat down.   That was after around 140 combined miles and maybe 2.5 hours of combined riding time.  I’m now thinking that longer interstate rides will need to be built up to.  The 230 miler that was on mostly “B” roads didn’t take nearly as much out of me; it must be the sustained high speeds.

That’s about it for me today I just wanted to share the moto-portion of my Memorial Day weekend with you I hope that you all had a safe and enjoyable weekend as well!
Posted by juanbook at 19:25