With Only A Motorcycle: Passing the Test & Roadside Tool Kit 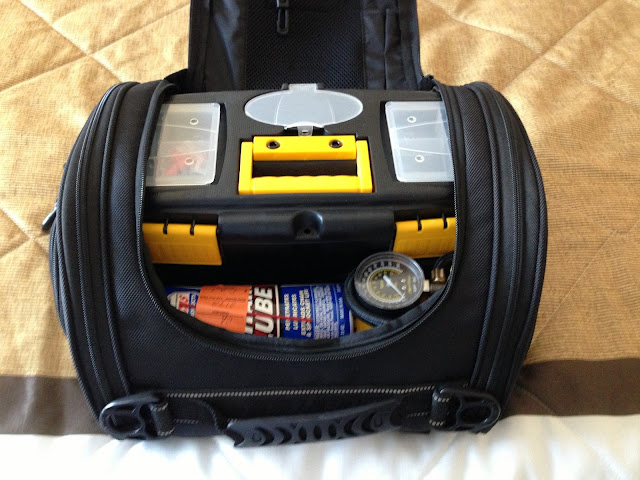 Last night I spent the bulk of the evening at a Starbucks reading through the California Motorcycle Handbook in preparation to re-take the written motorcycle license test. I woke up this morning and went back onto DMV website, re-took the Practice Motorcycle Test and went through my previous test questions before going to the DMV to re-take the test and complete the registration process for the FZ1. In my haste to rant about the fact that I failed the written test I forgot to mention the other headache with my first trip to the California DMV. I only just acquired the FZ1 on July 7th 2012 which was less than a year ago. That means that California is going to want a piece of the sales on the bike had I not paid it already. Well I did pay the sales tax when I switched the title into my name after I bought the bike. Wisconsin does not itemize these costs into on the vehicle registration form it only says the total amount that I paid. This was not good enough for them they wanted to know how much I paid in sales tax. This seemed weird to me but whatever I contacted the Wisconsin DMV and was prepared to have a hassle getting the necessary documentation but it worked out really well. The lady was able to help me over the phone and faxed the documentation the the Extended Stay's fax machine. 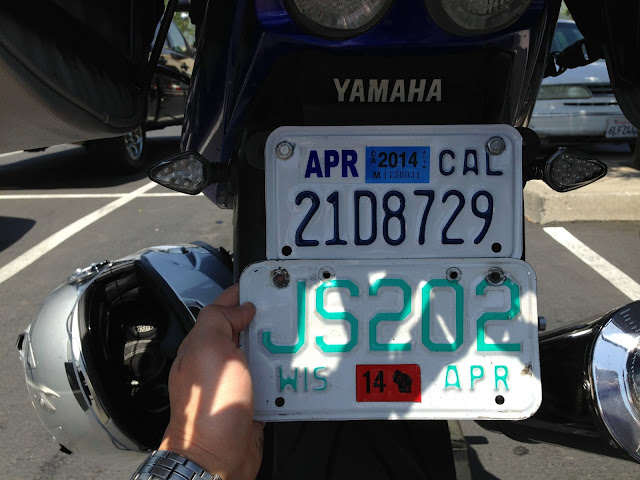 Armed with the proper paperwork and a solid days worth of studying I headed back to the DMV. The wait wasn't bad again and the people were helpful but I did figure out why they wanted to know exactly how much I paid in sales tax. When I filled out the form for the registration it asked me how much I paid for the bike. The DMV then used that number to figure out how much they would have charged in in sales tax had I bought the bike in California and then charged me the the difference so they could get a piece of my money. I don't understand that but whatever; in the end I'm just happy that I didn't have any hassles titling the bike here what with it being a non CA emissions bike and having an aftermarket exhaust. After that I headed over to the test station and the guy who was super helpful last time was there again talking to a customer who bought a motorcycle on Craigslist without a title. Why do people do that?!? It took him a long time to explain what needed to be done and the people who he was helping were not the most intelligent but he smiled and was humorous and entertaining throughout the whole ordeal. Watching and listening to him work was entertaining enough that the wait didn't seem bad. He even got a mother who had just waked in with a kid a coloring book and crayons Pretty cool... Anyhow I took the test and passed with one question wrong! The funny/sad part was that I would have had 100% correct had I not unknowingly skipped over a question and not answered it! It was a big relief to get that small dark chapter of my motorcycle riding career over with.

As promised; I took some time to make a video detailing the contents of my roadside emergency tool kit you can check that out below.


Also I wanted to share a photo of the idea I came up with for the soft luggage to make it a little more secure. I ran the plastic coated steel cable through the handles of each of the bags (including the top-case even though it's not shown in the picture) and then locked the ends together with a small padlock. Obviously someone can still get in them but it makes it just slightly harder for them to take the bags themselves. They'd have to have some sort of cutting tool with them rather than just un-clicking the buckles. 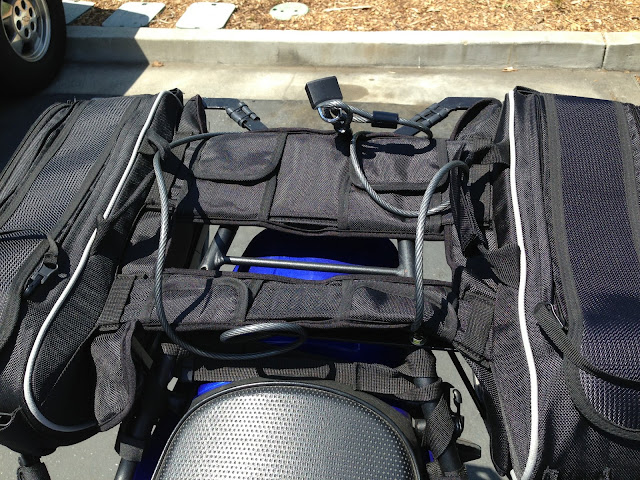 That's all for now. I am planning on doing some riding this weekend so look forward to a report to follow! As always; thanks for reading!
Posted by juanbook at 19:37