With Only A Motorcycle: Twin Peaks And A Second Flat 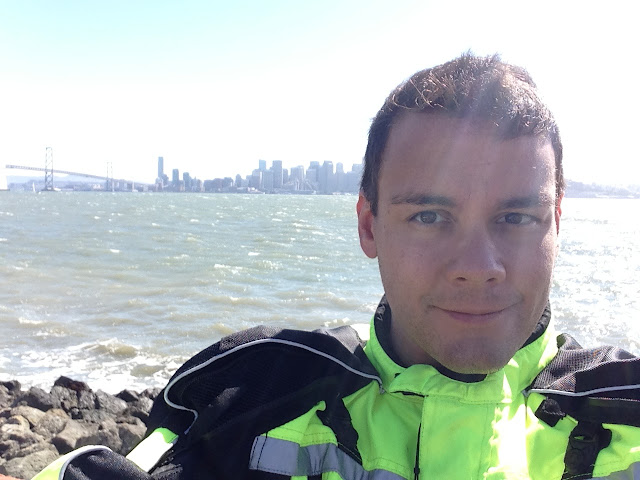 It was hot in Vacaville this weekend; 104 degrees on Friday and the forecast for Saturday was predicting temps near 108 degrees.  One thing that I have noticed though as the temps have been rising is that there comes a point where it's so hot that you can wear your protective gear again and it doesn't make you feel any more hot that if you didn't have it on at all.  The air gets so hot that having a mesh jacket or no jacket to allow the air to flow over your skin offers no relief.  Logically that would be anything above body temperature (98.6 degrees) that was my experience on Friday and while I enjoyed the novelty of this new discovery I didn't feel the need/desire to investigate it in detail.  Something tells me that I'll have plenty of opportunities to take in the finer details of high temperature riding as the summer bears itself out.

I decided that rather than spend the whole day holed up in my room at the Extended Stay or the Library or a Coffee Shop that I would escape to San Francisco to beat the heat the forecast said that it was going to be near the mid-70s in the city and that sounded a lot more palatable than 108 degrees.  I left Vacaville at 1400 and it was 106 degrees.  I decided to wear my Tourmaster jacket over the Joe Rocket Reactor mesh jacket.  as I have started realizing that San Francisco's weather is anything but predictable.  With all the vents open the riding in the high temperatures was tolerable and didn't seem any less comfortable than when I was wearing the Joe Rocket mesh jacket in 105 degrees the bay before.  I took 80 to the city and I noticed my first bits of relief in the temperature once I got to the 680 interchange and by the time I made it to the Carquinez Bridge I was pretty comfortable.

As you may be able to tell from the picture at the top of this post I made a stop on Treasure Island again.   I decided to ride into San Francisco via the Bay Bridge this time since I wanted to see what it was like riding on the top deck.  Saturday afternoon had proved to bear a lot more traffic then when I took the bridge out of the city on my last visit.  This time I was lane splitting for a good 5 miles leading up to the bridge toll area.  Once I got on the bridge itself it wasn't too bad traffic was moving at posted speeds but I figured that Treasure Island makes for a nice place to stop, stretch my legs, relax and collect myself before heading the rest of the way into the city.  Above is just some footage of the Bay Bridge and the San Francisco skyline I took while I was on the island.

If you are familiar with San Francisco you can probably gather that the temperature was a little cooler than the predictions made by my Weather Channel app.  It did correct itself by the time I made it up to the summit of Christmas Tree Point and told me that I was enjoying a 66 degree temp not counting the wind which was gusting at impressive speeds.

The view justified all the tourists that were up there despite the fog, despite the wind and despite the cold chilly weather.  That corner in the above picture was quite breathtaking as well; at least photographically.  The surface was not that good and the posted speed limit was 25 mph I think.  I thought to myself that it was interesting that a lot of the people visiting Twin Peaks that day fell into two major categories; people who popped up for a minute or two took one or two pictures with a camera phone and left or people with large-lensed cameras who spent much more time up there taking many photos.  A few like me fell into the middle area wanting to take in the sights with their own eyes and enjoy the moment; at least until I couldn't bear the chill anymore.

Before I headed down I stopped and took a quick video of the scenery at the summit to share. 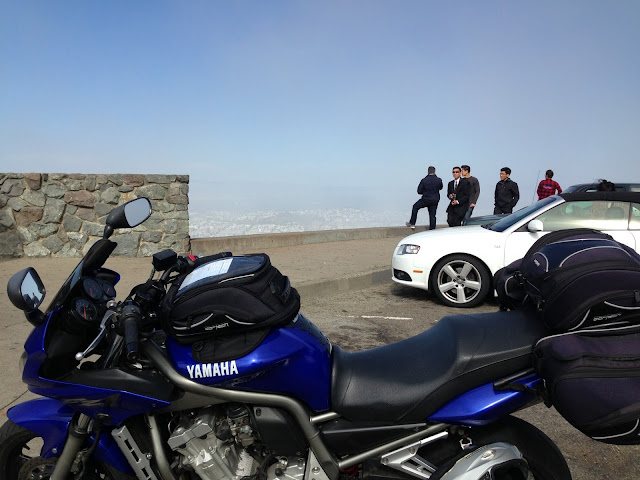 When I had pulled into my spot I was excited to see that I had a clear shot off the moto and the city below.  I had gotten my camera out just in time for a giant Dodge Ram to pull into the spot blocking my photo op.  When he pulled out I took advantage of the opening before a waiting car pulled into the same spot.  Not the best turnout but acceptable I guess. 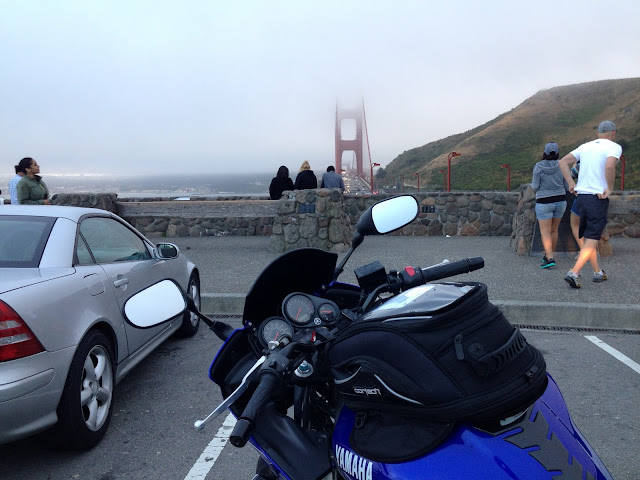 I was chilled so I decided that I would stop at a Starbucks; no fancy boutique shops with thimble sized coffee cups this time.  I never get anything bigger than the smallest offering at Starbucks I try to bear in mind that in most countries our smalls (or "talls" for some unknown reason in "Starbucks-ese") are actually the size of a large in most civilized societies.  But the coffee I had the last time in San Francisco was probably maybe 3/4 - 1 ounce worth of coffee and that it just too little I needed to be sure I would have something large enough to hold in my hands and warm up with.  I still do not like Starbucks but until I do some real research and find a place I like (I know exactly what I want to see in my coffee shop) the consistency across the board at their establishments is welcome even though I feel like I'm selling out a bit.  I did a little writing on the iPad while I was at the Starbucks (stereotypes are abounding here today aren't they?) and decided that I would leave the city via the Golden Gate Bridge this time.  Hoping she would be less shy than last the time even though it was obviously a foggy day.

Well the true to form the Golden Gate is a classy girl from days-gone-by and wasn't about to give it up on first date and not even the second, though she did hike her skirt up a little bit for me.  It's time as riding across I did actually get the feeling that I was crossing a bridge though I couldn't see very far out into the bay, I could see all the oncoming lanes and was about to follow the large cables as they arced towards the skies to their towers just barely visible through the mist seeing some of the structural details up close I did think to myself, "You classy girl."

Having made two already I decided I might as well take a video while I was at the observation area on the north side of the bridge.  I should apologize for the wind noise in all the videos I tried to mask the speakers with my hands but it didn't help.  The gusts by the Golden Gate were immense!  One in the video blew so hard I had to take a step back to catch my balance.  I found myself riding down the hill from the bridge dealing with some of the strongest cross gusts I have felt in my entire riding career.  Some strong enough to push me from the center of the lane to the right paint stripe.  I made note of that and moved further left after that. 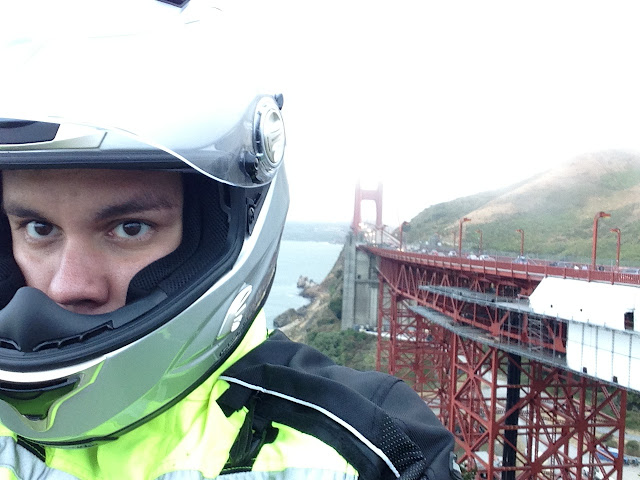 I encountered some more dense traffic before heading into the Dutchman Slough area on Hy 37 by the time I had lane-split through two miles of traffic to get to the two-way traffic portion it was still pretty bad and about twenty minutes later we cruised past what looked to be the remnants of a rear-ending. The offending vehicle was nowhere to be scene but the vehicle with the rear end damage was there along with the police lights a-blazing.  After we got past them traffic picked up again and I got on with the task of returning to Vacaville.

I am definitely going to have to look into a higher profile windshield for the FZ.  The sustained high speeds of freeway travel kicked the crap out of my upper body again.  I hit the 680 interchange and the heat was back much more like someone hitting a light switch this time but it was no triple digit temperature.  By the time I made it back to Vacaville it was maybe in the mid-80s.  Things had went smoothly I thought; little did I know that I had picked up a stowaway somewhere in my journeys that day.

I woke up that Sunday morning had a nice laid back purposeful morning and decided that It would  be cool to see if I could find any records at the local Goodwill. I don't have our turntable here yet but it was something to do and would maybe give me something to look forward to.  I took the bike down off the center stand and immediately knew something was wrong.  When I tried to wheel the bike back it felt like the rear wheel was in wet cement.  I looked down at the rear tire and sure enough for the second time since I moved to California and switched to solo-moto the fuggin' thing was flat.  I decided to make lemonade out of this lemon and made a series of videos along the way showing how I repair a flat tire, you can see that content below.

It only took me an hour to fix the tire it probably would have went much faster had I not stopped to shoot the video and had I known that my newly purchased tube of rubber cement had been torn open and leaked all over my toolbox and had I purchased a different medium for inflating the rear tire.  I think I am going to look into those CO2 inflaters this time around.

Well that's about it for my weekend adventures in solo-moto I hope you enjoyed my recounting of it and thanks again for reading.  Until next time!
Posted by juanbook at 17:59