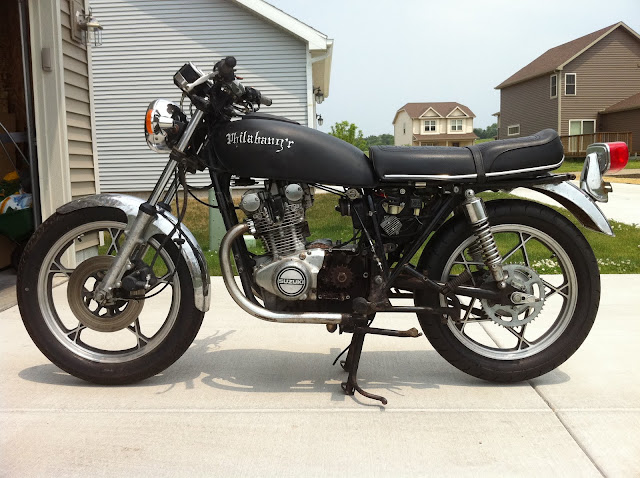 As I mentioned previously after getting the lower bars on the bike, the seat was becoming more and more of an eyesore, so this last Wednsday I went out to the local motorcycle salvage yard and found myself a new seat.  They had a large cache of old cycle seats up in a dimly lit attic in their “warehouse.”  After some searching I was able to find the above number and it was exactly what I had in mind!  I wanted one the long flat seats that some of the more sporting Suzukis of the period had.  This one as far as I can tell is off a Suzuki GT185, probably a 1975 model judging by the pictures I have looked at on the web, and while it wasn’t a requirement, the fact that it has the “Suzuki” on the back of the seat is pretty cool. 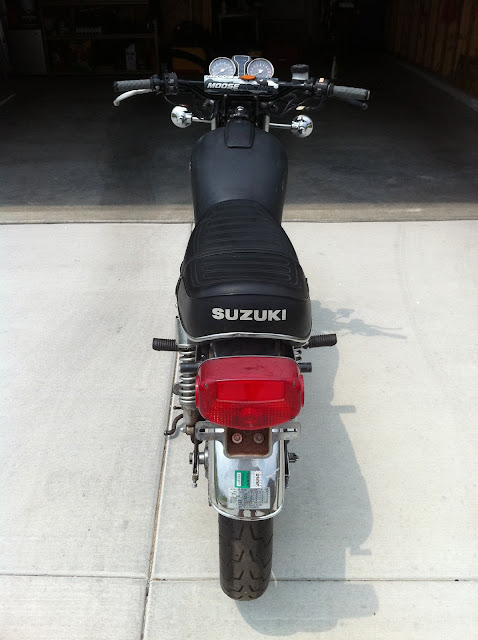 The seat itself was not labeled when I found it so all I knew for sure was that it was about the same size seat pan (I brought the old one with) and that the rubber mounts on the seat pan that ride on the frame rails were approximately the same place as the stock “king and queen” seat.
The mounts however were not the same, the hinges and the locking mechanism is mirrored in respect to the old seat so in the pictures the seat is just set on the frame so I could get an idea of what it will look like. 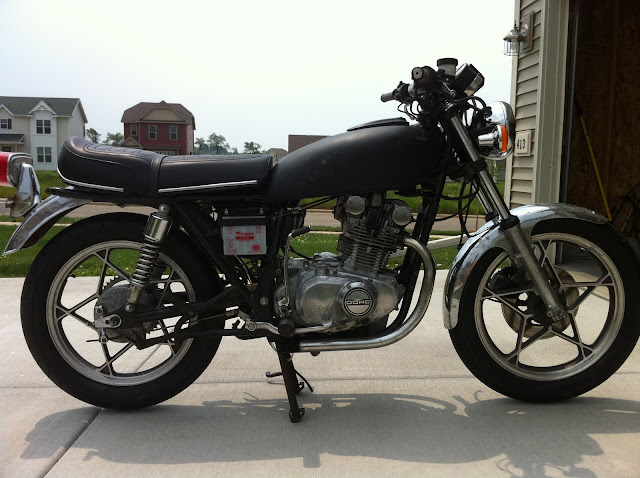 I will have to either take the mounting brackets off the stock seat (thus making the old seat useless) or make up some custom brackets to fit the new seat to mount it on the bike.  I am leaning towards the making up custom mounts for the new seat, even though I don’t see why anyone would want a “king and queen” seat maybe someone else could use it.
I did remove the grab bar and the turn signals off the back, the grab bar will most likely not go back on but I will have to make spacers the same thickness as the pint where the bar grab bar went to the shocks in the back as  I want to keep the rear shocks aligned.  The turn signals as well as the front ones are going to a friend’s place to have the stalks shortened.  The bike does seem a lot slimmer and a lot more sporting with the new seat which was the goal. I couldn’t be happier with the seat purchase it didn’t look too pretty when it found it in the attic at the bone yard but a little Armor All and it looks practically brand new!
I also finally got the right bolts to put the front fender back on the bike.  It’s not the prettiest but with such skinny fork legs the forks need to be joined together for strength and stability.  As I spend more time with the bike I will think about how I want to trim the render as it doesn’t need to be so big.  I will probably take the bulk off of the front as that is not all that necessary, but I have to think about how much I want to leave on the rear.  I don’t want stuff being slung up from the road onto the engine. 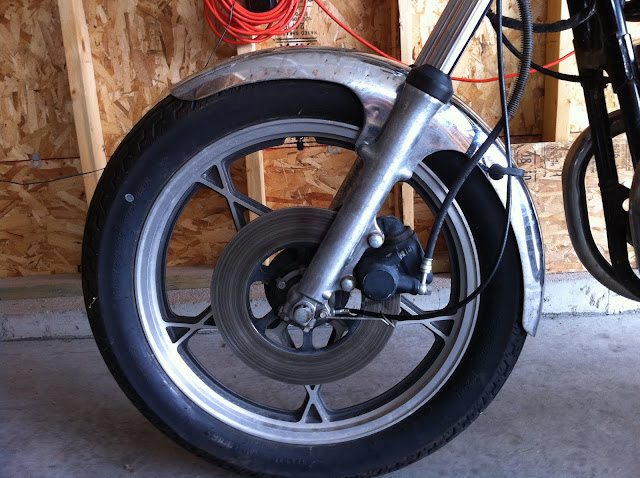 The fender is a close fit for the tire, probably only 1/16 of an inch clearance, I will have to look into that and make adjustments if necessary for safety before it heads out on the road.
Speaking of heading out on the road, yesterday I finally got the replacement o-rings for the emulsifier tubes on the carbs so that project can be brought back to the front burner and after that I still have to clean up the chain and clean out the drive sprocket area and cover, as well as remove some stuck bolts for the drive sprocket cover!  I am 3 days into my 7 12 hour shifts in a row stint so it will be a bit before I get to any substantial work but there is lots to do so stay tuned, and thanks for reading!
Posted by juanbook at 18:04