Oldbike: It Wants to Be A Good Bike… I Can Tell!!!

So it’s been a long time since I posted an update but life kept me out of the garage for a good amount of time in this new year.  First was our 2 week honeymoon which was an amazing time, and after that I had to throw myself into my NERC Reliability Coordinator certification studies. Which I passed, if you were wondering…

But now that the studying is done and I am steeling into my new job and the responsibilities that come with it, I see a fair amount of wrench time in my future!  The first thing that I decided to do once I got back into the garage was to lose the leather Harley grips, they have no place on a bike of mine.  The will be replaced with some spider grips that I had lying around. 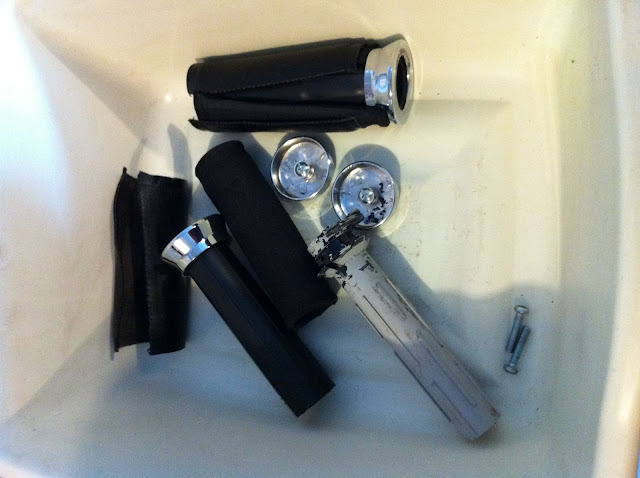 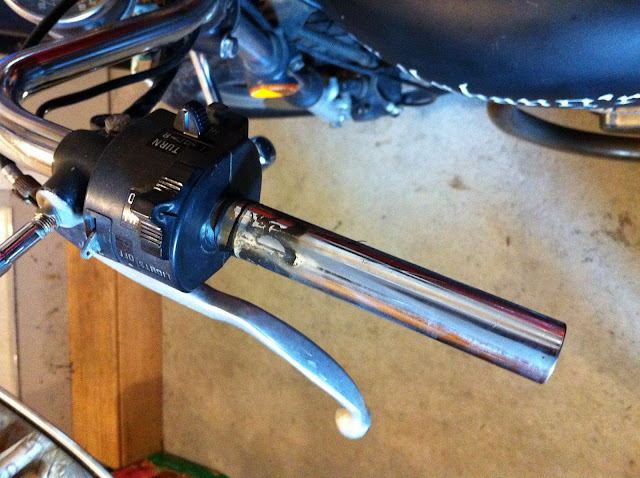 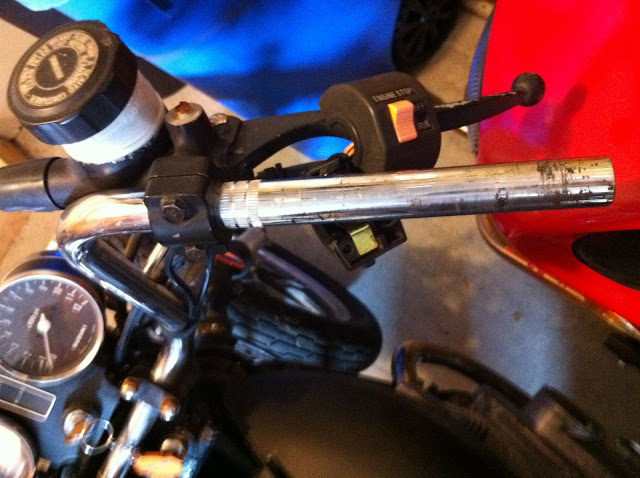 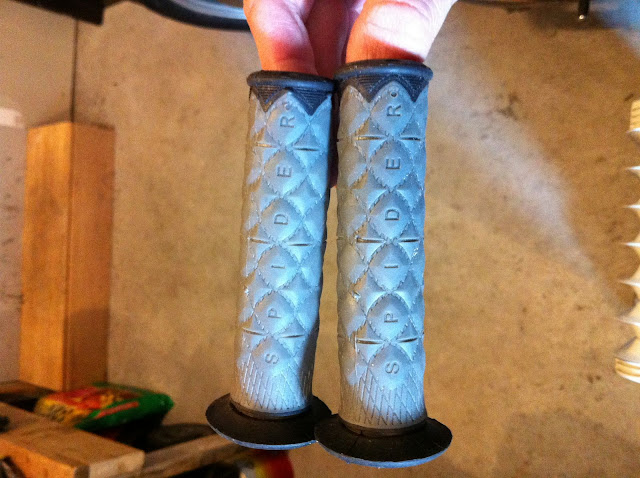 After that I started to run down the real cause of the starter button gremlins on the GS.  I disassembled the right hand controls to see if there was anything wrong in there and discovered that when the previous owner installed the grips, he must have  routed the wires the wrong way around the bar causing some stress in the wires going to the run/stop switch.  The solder connections were showing a few cracks (but not disconnected) so I re-soldered them anyhow to be safe. 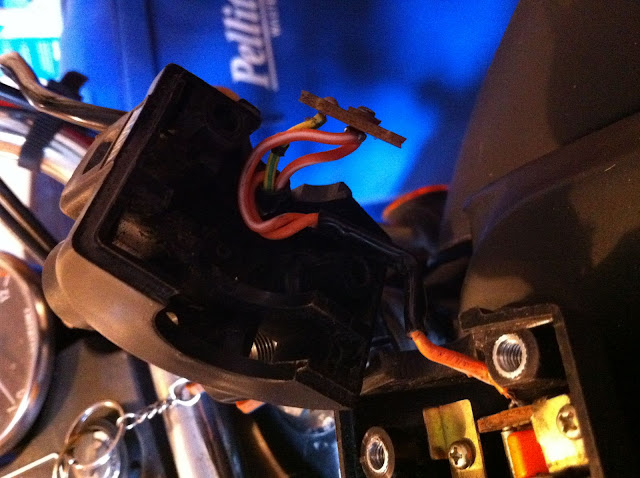 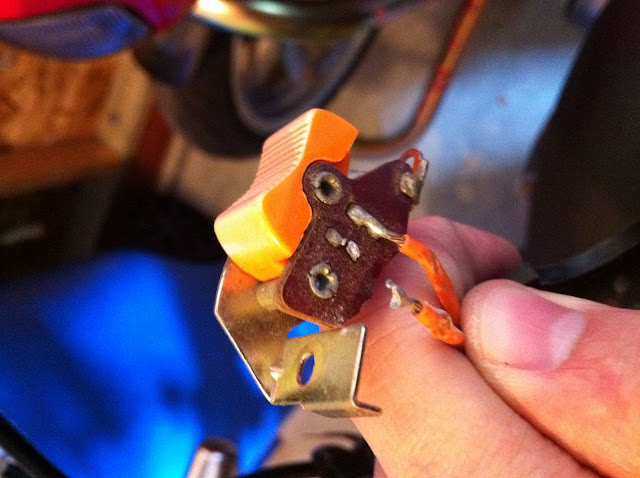 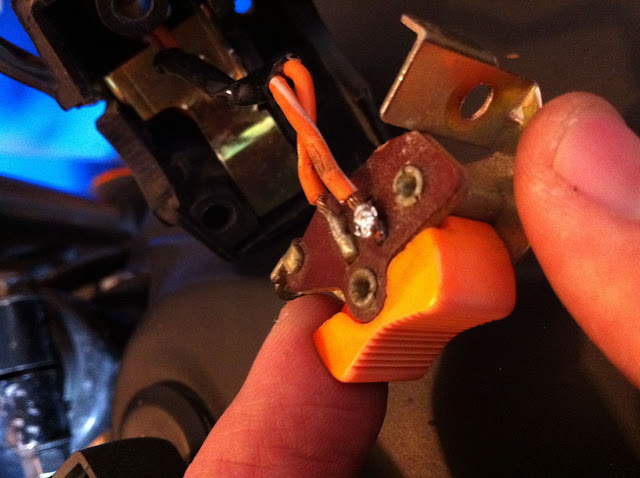 I took the opportunity to disassemble the thumb switch and clean the contacts on the switch itself in case that was causing it to not start.  Unfortunately these repairs did not have the results I was hoping for and the bike still would not start with the starter button. 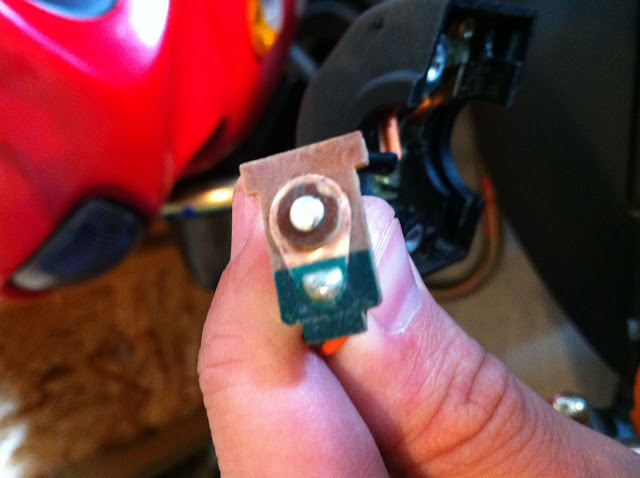 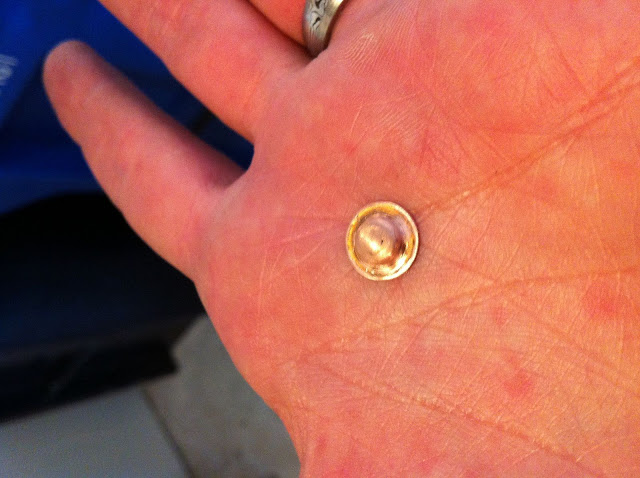 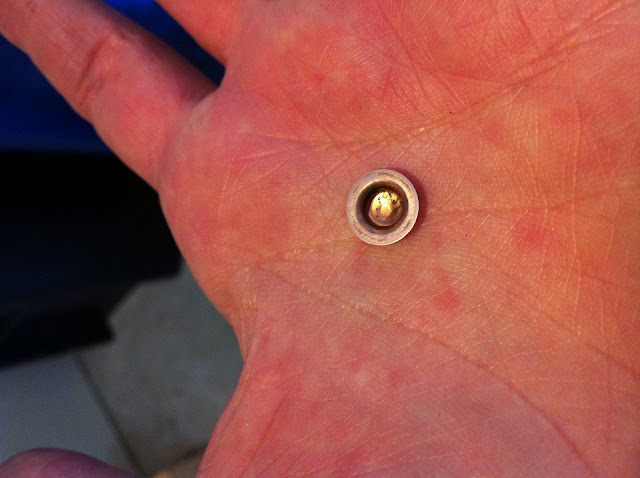 I moved on to the clutch safety switch on the opposite handlebar to see if something was amiss.  I wish I would have take some pictures of the work I did on that side but I was so caught up in the work I forgot to.  I will try and draw up a diagram of what I found in case someone else is having the same problem.  Basically the clutch safety switch is there to make sure that the rider holds the clutch lever in while starting the bike to avoid someone lurching forward when they thumb the starter and the bike is in gear.  So you grab the clutch and the switch slides into position closing the contacts and allowing current to flow to the starter solenoid and conversely the starter.  When I disassembled mine I could see that someone had cobbled in a non factory clutch lever that did not slide the clutch safety switch when you squeezed the lever.  So for now perhaps for good I have soldered in a jumper to connect the two clutch safety switch leads permanently and that fixed the problem with the thumb starter switch! The clutch safety switch is pretty much an idiot protective device anyhow.  If you don’t know to have your bike in neutral or have the clutch in when you start your bike you deserve to be bucked off it if you ask me!

So after I got the starter switch fixed I figured it would be a good time to try an start the bike.  You can see how that goes in the video below.


That’s it for now, I have another post in the works now relating to the headlight assembly and a little less cobbly-a-way to hold my headlight bulb in place and I’ll try and get a diagram of the clutch starter assembly or maybe I’ll just take it apart again and take some pictures!

Thanks for reading!
Posted by juanbook at 19:05