The first day back after the winter testing ban in MotoGP never really sets the world on fire, but for fans of the series it does allow them the first glance of their favorite riders on the next evolution of their particular motorcycle, see how riders who have switched manufacturers fare on new machinery, and how returning manufacturers and riders stack up to the old guard. 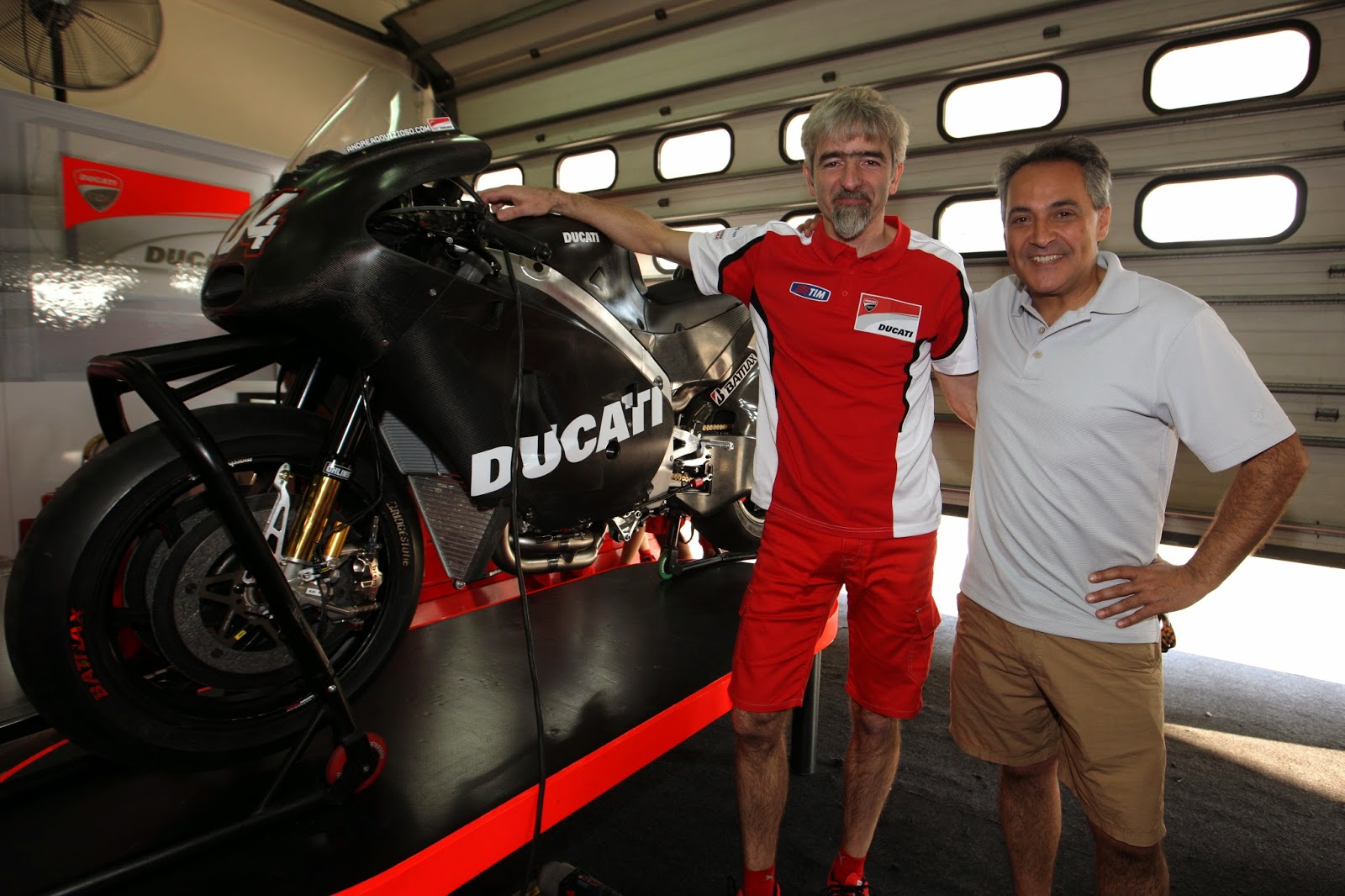 For me, the latter was what really interested me on the first day.  The big bomb will not be dropped just yet; that being the roll out of Ducati's GP15, which for now is set for Sepang 2.  The GP15 is a new prototype designed and built from a clean slate and the first time it turns a wheel in anger at a test will speak volumes as to whether or not Gigi Dall'Igna has lived up to the uni-browed hype and has cured the understeer that has brought the careers of Sete Gibernau, Marco Melandri, arguably Nicky Hayden and almost Valentino Rossi's to a grinding halt.  With that off of the docket; for me, the spectacle turned to Aprilia who was returning as a factory with the aforementioned long time dark horse Melandri.

After a horrible season in 2009 with Ducati, a demoralizing 2010 with the defunct Kawasaki MotoGP effort (under the Hayate banner) and a mid-pack 2011 finish with Gresini Racing the writing was on the wall that Melandri would be leaving the World Championship.  For me it always seemed to me that Marco had the capacity to be a World Champion but the circumstances had never lined up to make it so.  Seeing him take 2nd overall in the 2011 World Superbike season with Yamaha made me think that maybe his time had come and that 2012 would be the year for him to rise to the top again (10 years after he had last won a world title with the Aprilia).  Unfortunately once again circumstances shifted just as he was starting to build momentum, Yamaha pulled their factory effort out of World Superbike and Marco had to learn a new bike for the fifth year in a row.  2012 and 2013 saw him taking 3rd and 4th respectively with the factory BMW effort and 2014 saw another switch, this time to factory Aprilia and another 4th overall.

Another year and another change for for Melandri.  This year sees Melandri closing the loop in many ways, he is back in MotoGP an a factory backed Aprilia squad and back to Gresini; a team that he had has the most success with in the World Championship.  In 2005 he took a distant second to a Dominant Valentino Rossi; winning the last two races of the year in Istanbul and Valencia bagging five other podiums.  2006 saw him Winning three races Turkey (again), France and Australia with four other podiums for fourth overall.  Add to this the fact that his one and only world championship in 2002 in the 250cc class came on Aprilia machinery, you would think that he would have been chomping at the bit to take this opportunity but even at the post season test in Valencia Marco was was hardly committal when discussing his plans for 2015.  To me it seems that there was no other real viable option for him as it seemed that Aprilia seemed to be pushing him back into the MotoGP world.  Why the reticence? 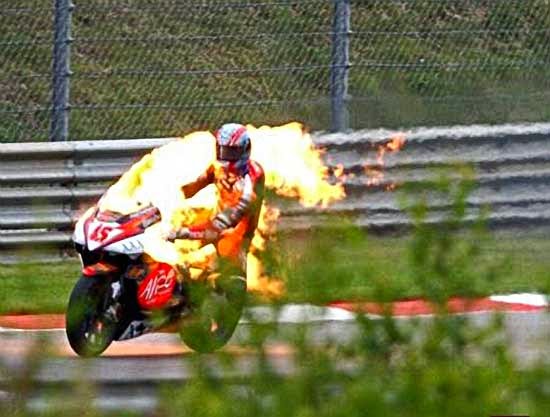 I don't think it had anything to do with the above photo but anyone who is in the know who hears Aprilia and MotoGP in the same sentence surely has this image spring to mind.  Here's the scene, at the end of the 2014 season Gresini was in sponsorship trouble.  Their title sponsor Go & Fun either ran out of money or never delivered the money they had promised to gain the title sponsorship of the team which put the pinch on Fausto's outfit.  They already had to accept the support from Showa and Nissin (a Honda subsidiary) in the suspension and braking department.  Not because they wanted to be the only team in the paddock not running Öhlins suspension and Brembo brakes but because Honda, keen to get the race R&D offered them to the team for free.

The loss of that sponsorship money meant that Fausto Gresini found him self swallowing a very bitter pill; letting go of his second factory Honda lease and giving up his RC213V.  Having already let go of his first lease after the 2010 season and choosing to run a factory/CRT combo for 2011 things have not been on an upswing for Gresini Racing as of late.

You don't let go of a factory Honda lease in the MotoGP world willy-nilly they are rarer than hen's teeth, proving that point is MarcVDS' last minute entry into the 2015 MotoGP paddock the bike became available and they knew they had to jump on it they had not plans on racing in the top class until that bike was freed up.

This is when Aprilia enters into the picture, they had been testing the MotoGP waters ever since 2012 when the CRT (now Open Class) formula was introduced.  Under the ART (Aprilia Racing Technology) they basically supplied their World Superbike RSV4 (though with a different frame per the CRT/Open rules) to teams in the MotoGP paddock.  But havd not officially entered the championship with a full factory team just yet.  Aleix Espagaro took top CRT/Open honors with 13th and 12th overall in 2012 and 2013 respectively.

My understanding is that Aprilia also did not have plans to return with a full factory entrant in 2015 until the eleventh hour as well.  They did not have the money to come in as a stand alone factory and this is where Fausto played one of his last trump cards, his team has backing for transport to all of the races which if I recall is worth around $8 million so once Fausto had no bikes, Aprilia or maybe it was Gresini himself saw the opportunity to get back into the game under the Gresini Racing umbrella and bringing to (albeit untested) factory bikes into Fausto's garage.

All of the aforementioned circumstances I am sure weighed heavily on Melandri he really didn't have a choice it seems, Aprilia was pulling factory support from World Superbike and really it was probably his best option the whole time.  But once again I get to use the term "bitter pill" as while the official quote is:

“I was offered the chance to develop a completely new project and it is something that I have not yet done in my career since I have always had ‘inherited’ bikes. Precisely for this reason I am very intrigued by this challenge,"

I think in his head he was thinking of all the work he was going to have to do, riding the next evolution of the ART bike, developing the 2016 bike, learning to ride on the Bridgestone rubber, and then having to learn a whole new tire manufacturer the next year when the supplier switches to Michelin and that same year the switch to spec electronics.  The fact of the matter is that barring Aprilia bringing something magical to the grid Marco will spend the next two years slogging around in the middle of the pack at best and then likely get sacked for a younger rider who will pick up the project just as it is turning the corner and enjoy all the fruits of his labor.  Hence his initial period of denial of his plans for 2015. 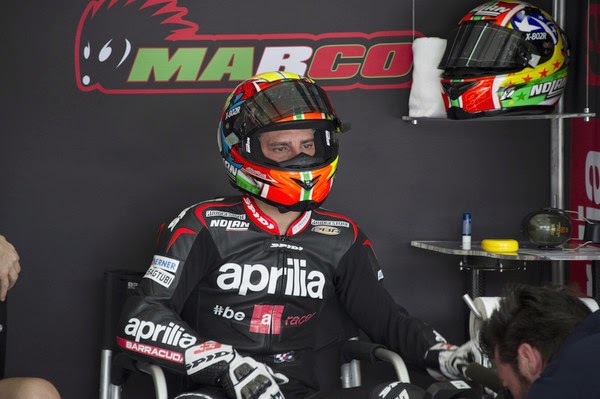 Looking at the time sheets for the three days of the Sepang 1 Test they show dismal results for Marco:

If you compare him to Maverick Vinales who is much younger but finds himself in a similar situation; New untested bike, new tires, and a new team you can see the task Melandri has in front of him:

It also goes to show you why Vinales was the hot choice for Suzuki when they went looking for a young rider to match up with Aleix Espagaro.

Given the (we have to admit) dismal performance, the team principals seem to be willing to give Melandri the benefit of the doubt for now:

"As for Melandri, we knew that it would not be easy for him to get used to a completely new technical situation. Marco needs to adapt his riding style to this type of tyre and we know that takes time. We have confidence in him. The important thing is that he stays focused and determined."
~Fausto Gresini "There were a lot of technical aspects to tackle, but that is quite normal considering the fact that this was the first shakedown. I'm sure we would feel less pressure if it were just us lapping on private tracks, but that wasn't Aprilia's intention."

You can read the full team report here.

Marco has never really come to terms with the Bridgestone tires, He was 5th overall in 2007 on his first season on Bridgestone tires with the RC212V and the it was downhill from there with the Ducati the next year followed by two 10th overall seasons with Kawasaki and Honda again.  So we can hope for a revelation in testing or hope that he manages to impress enough to not get the boot before the Michelin switch in 2016.
Posted by juanbook at 22:09