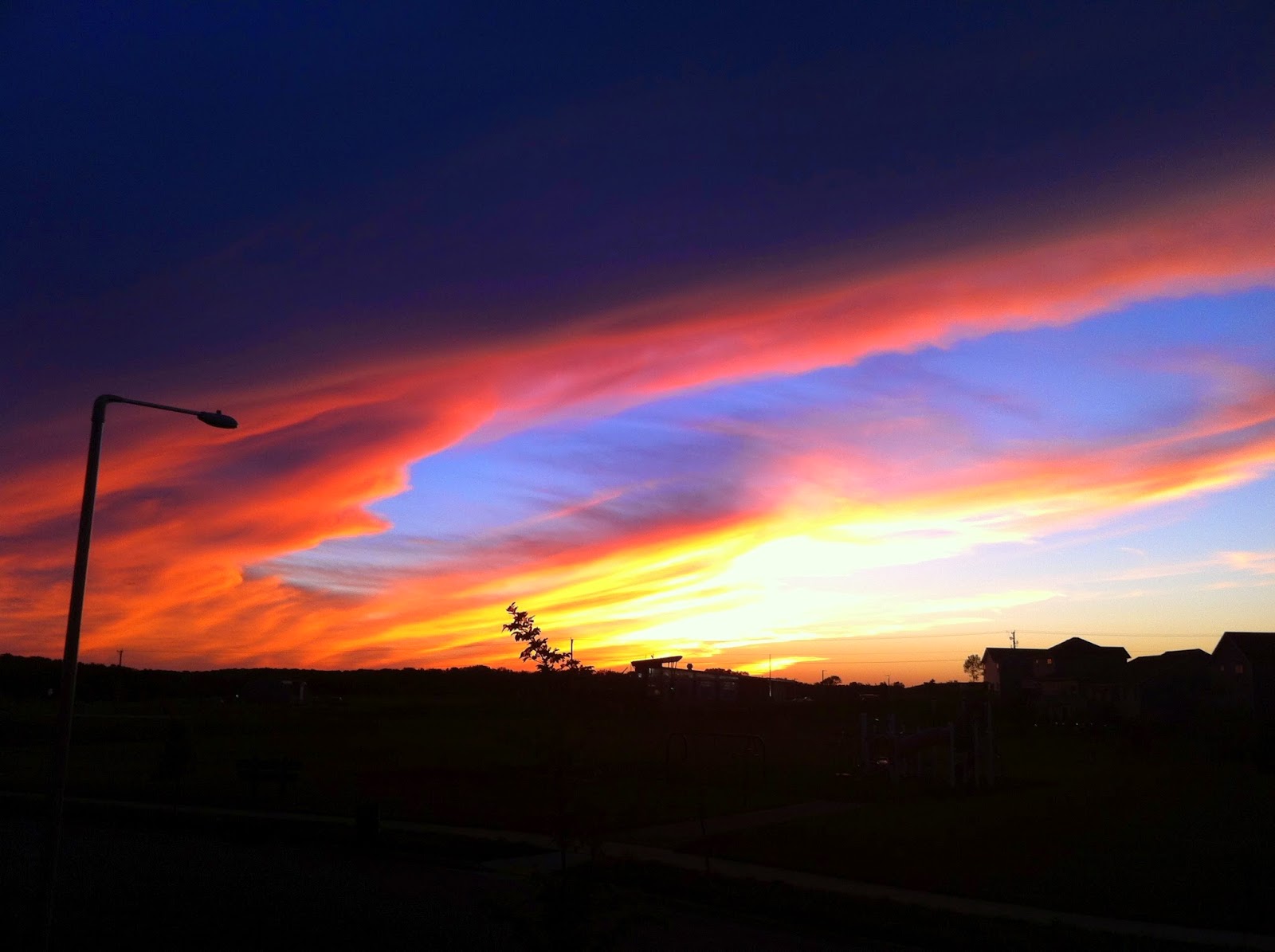 This last Friday the sun set on the adventure that was home ownership in Madison, Wisconsin. I thought it would be fitting to share a photo of a sunset taken from the second floor of our former house.  The memories of the home itself were great bur there are lessons that I would be remiss if did not share with you regarding building an entry level home in a new neighborhood with a large builder (Veridian Homes for us).

If you are choosing to build a home in a new neighborhood Be Sure that you plan to stay there  long enough for the builder to finish building on all of the lots.  It may behoove you to find out if they are panning other additions after your the b subdivision is filled.  The reason mention this is, that same company who spent so much time treating you like kings and queens during the purchasing and building process will shank you in a dark parking ramp if you try to compete against them in selling a home.  Of course when we were building our home there was no way to tell that the political climate would shift so much, and public support for teachers would fray so much that we would even consider leaving Wisconsin but we all know that if did.

When we knew we were moving we talked to a realtor and the general consensus was that all we would have had to bring nearly $30K to the closing to cover the difference our home would have brought in the sale and the fees for the selling and purchasing realtors.  This was specifically because of the reason I mentioned above.  There were people trying to sell their homes while the builder(Veridian Homes) was still building homes in the neighborhood and they were selling our exact home for nearly $20K less than we needed to sell our home for and break even.

So we did the only thing that we could we got a property manager and rented the home instead hoping to wait until Veridian Homes was done building in our neighborhood.   We lucked out and we had two good years with two good renters and Veridian did finish building in those two years as well and two years later we were looking to walk away with $10K.  We thought that all the way up to the a week before closing.  But Veridian had one more jab to take at out wallet.

In the two years that they were filling those lots they continued to sell similar homes at  nearly $20K less than what we paid for them to build our house and while we had a buyer willing to pay our asking price the appraisal came in at $10K less than the offer precisely because Veridian had watered down the market with their price cuts.

In the end I'm pragmatic about the sale.  We got out of the mortgage without paying any money out of pocket which a lot of people who bought homes around the same time as we did can't say.  All the money that we put into the mortgage was gone but out payments were never more than rent would have been and the two years we rented out the home the rent we charged covered the mortgage payments so no harm no foul really.

In the end I am just glad to be done with contributing any of my money to the states shit administration and their shit agendas.  I hope that their best and brightest that remain there take a cue from ours and others like us who have moved on to bigger and better things and do the same leaving the remainder of populace and the state to collapse in on its hardcore conservatism like a dying star.
Posted by juanbook at 12:51