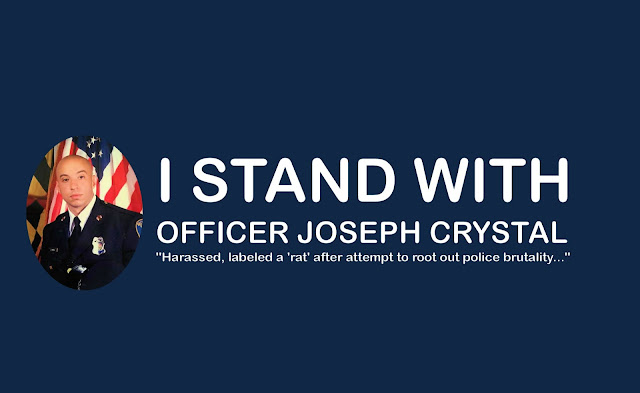 On the heels of so many high profile police brutality/civil rights abuses/outright murders I felt the need to share this story of Officer Joseph Crystal because the sort of behavior he endured is endemic in the environment he tried to change on his own.  Things can't get better in our police forces if the truly good ones are stigmatized and labeled as pariahs for doing the right thing. After the shootings of Tamir Rice, Michael Brown, Eric Garner, Walter Scott, and Freddie Gray it seemed that some people felt the need to make posts along the lines of, "I Stand With The Police."  A sort of blind allegiance with the entity/person who was responsible for another unarmed, black American's death.  That sort post 9-11 hero worship needs to stop or things will never get better. It is possible to be on the side of the police force as an organized civil force put in place to maintain order, prevent and detect crime, and enforce out laws and;
So I made the graphic above using an image sourced from the New York Daily News article (referenced below) for those who flocked to support the police as individuals and as an entity when under fire for the right reasons, should they decide that it is time to stand behind someone who was the right person for the job, who did the right thing, and was then exiled for it.  For other who do actually choose to Stand with Officer Joseph Crystal feel free to share this image as well.

New York Daily News: ‘If you snitch, your career is done’: Former Baltimore cop says he was harassed, labeled a 'rat' after attempt to root out police brutality


The Free Thought Project: This is What Happens to “Good Cops” Who Expose Corruption in their Departments
Posted by juanbook at 19:19