Meanwhile Back In Wisconsin: Poverty Reaches Highest Level in 30 Years 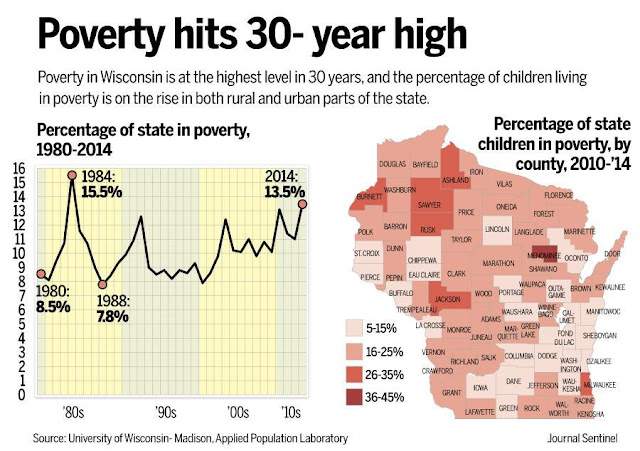 I wonder how the Wisconsin population who tripled-down on Scott Walker felt reading this article?

Only 10 states had faster rates of increase in child poverty than Wisconsin.

■ Twenty-five of Wisconsin's 72 counties had a significant increase in child poverty. No county had a significant decrease. The highest childhood poverty county remains Menominee, which went up from 35.1% to 44.8% of residents under age 18 living in poverty.

Milwaukee County, the state's largest urban center, went from 26.4% to 33% child poverty and is now tied for second highest with Sawyer County in northern Wisconsin, where Hayward is located.

■ Racial disparities in poverty are bigger here than in the U.S. as a whole, and are growing faster. The poverty gap between African-Americans and whites grew 4 percentage points in Wisconsin, while the national average did not grow, Jones said.

■ Significant changes in poverty occurred among adults at every level of educational achievement in Wisconsin.

For those with less than a high school education, poverty rose from 20.5% to 24.5%. The impact was mitigated by a decrease in total population with low educational attainment, which dropped from 380,000 to 337,000.

■ Poverty cut across various levels of employment in Wisconsin.

Increases were also seen among the working poor. Among employed adults, poverty rose from 6% to 7%. It increased among those employed full-time from 2% to 2.4%.

UW-Madison's Applied Population Lab is housed in the Department of Community and Environmental Sociology in the College of Agricultural and Life Sciences.

UW-Madison's Institute for Research on Poverty each year produces a single-year census data comparison called the Wisconsin Poverty Report. That report is due later this spring.
Posted by juanbook at 22:17