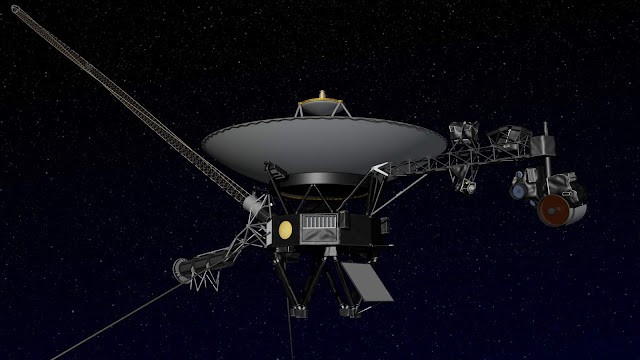 Voyager 1, NASA's farthest and fastest spacecraft, is the only human-made object in interstellar space, the environment between the stars. The spacecraft, which has been flying for 40 years, relies on small devices called thrusters to orient itself so it can communicate with Earth. These thrusters fire in tiny pulses, or "puffs," lasting mere milliseconds, to subtly rotate the spacecraft so that its antenna points at our planet. Now, the Voyager team is able to use a set of four backup thrusters, dormant since 1980.

As a side note I have known since I was a kid that they placed golden records on the Voyager spacecrafts I always thought they were audio only but reading on the NASA website about the contents of the records I saw that there were images too! The 115 images are encoded in analog form.


NASA: Images on the Golden Record

And then I found a video of what the images would look like if properly decoded from the record!

Pretty awesome; And as a side note I didn't see a single picture of an American Flag.
Posted by juanbook at 21:42