AT (After Trump): Deep Seated Xenophobia Comes to the Surface In Mauston, WI 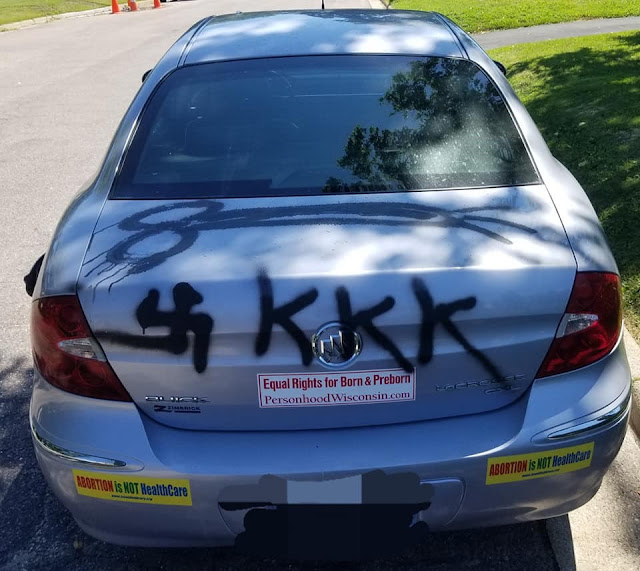 Growing up we were poor, two years prior to our 1988 move to Wisconsin my Dad had convinced my mom to try and move from Hammond Indiana to Puerto Rico to be close to his family in Yabucoa they sold the house we were living in and spent all the money on tickets to Puerto Rico and we left.  My Mom being a midwestern gal hated it immediately (too hot, too humid) if we lasted a month I would be surprised.  All I know is that when spent the rest of our money to fly back we had no money at all upon arrival back in our hometown in the Continental United States. My Dad had to go to the St. Margaret Mary Catholic Church in Hammond and ask for money from the Nuns at the Convent for food and for lodging.

During that time of my life I distinctly remember waiting in an actual foodstamp line on more than one occasion; Because of this I know what government cheese is, what it tastes like and I have drank government powdered milk.  We spent the next two years floating around the area before  moving from Hammond Indiana to Elroy Wisconsin (population 463 at the time and hometown to then Governor Tommy Thompson) on the heels of my Mother's bachelors degree in Theology from Calumet College of St. Joseph.  She was able to got a job as the Director of Religious Education for St. Patrick's Catholic Church.  The only reason that we were able to afford to move there was because part of the job was that we would be allowed to live in the vacant second floor of the rectory free of charge and my mother would be paid for her work.  My Dad managed to land a job at Walker Stainless as a welder, a job that he held until a few years ago when he retired.  After two years my parents were able to save enough money with their jobs and the fact that we were not paying out of pocket for housing for a down payment on a ranch home in Mauston, WI.  My mom quit her job and focused on raising us and my Dad supported us with his one job the rest of my childhood.

There is a lot more to that time in my life but for now I want to focus on an event that just happened there this last Sunday involving my Dad. 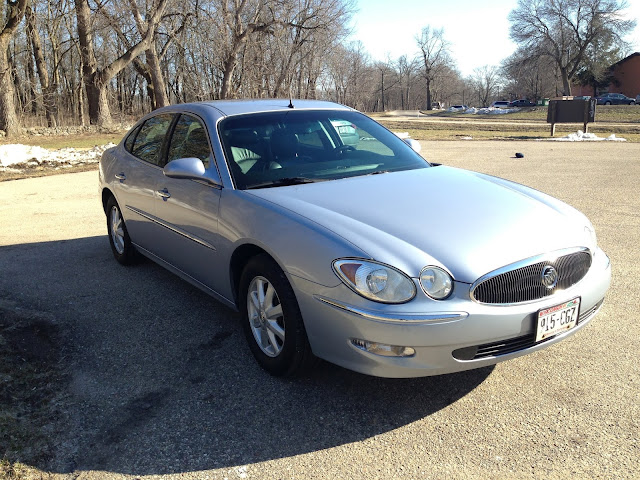 A little over five years ago; When I moved to California, My dad bought my 2005 Buick Lacrosse from me.  My now deceased mother always loved the car so he bought it for her.  A few months ago he hit a deer he finally got it repaired out of his own pocket and then this past Sunday someone vandalized it in the early morning hours. They egged the car, smashed in his driver's side rear window, spray painted the word "fuck" on the drivers side quarter panel, opened the gas tank and attempted to (succeeded in?) putting egg in there, spray painted "KKK," a Swastika and a penis on the trunk lid and keyed the car.

My dad has another car that was parked in the garage at the time, He didn't need to fix it up after the deer incident; in reality it was financially unwise but he loved my mother and he saw it as a way to stay connected to her.  Now this... 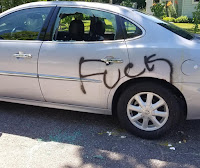 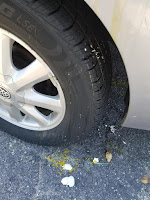 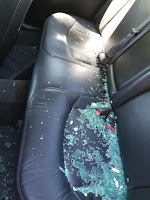 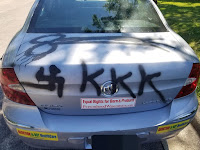 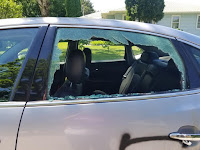 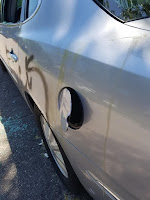 I want to share this because I know that nothing will be done about it.  No one will be held to account and the same racism that has peaked it's head up for this brief moment will go back to curdling just below the small town facade as it was during my time in small town Wisconsin.  Nobody will care that a retired, Puerto Rican, Catholic Deacon,  widower, veteran, who got himself some bootstraps and pulled off the American dream had this happen to him when his Daughter and Grandkids were home visiting.

I'll close out this rather long post with an excerpt of something that in 2009 because I think it does a better job at describing the victim of this hate crime than I can do in the emotional state I am currently in:

An article in The Catholic Times eleven days ago (2009-08-07) mentions my Dad.  The article is announcing the Ordination of a new Deacon.  The new Deacon said the example my dad set helped him realize that the calling he felt to service was a calling to the Diaconate.  “He’s a quiet, humble man,” he said.  “Through him I experienced Christ the servant, who a Deacon is supposed to be.”

I never thought it would be possible to say so much about my Dad with so few words.  Perhaps he didn’t know how true his statement rang through my Dad’s entire life.  Ever since I can remember my dad has been in service, before he became a Deacon he was in service to his family.  One of my favorite things to do when I was growing up was to go with my Mom to take Dad lunch.  Back when my Mom was studying Theology, My dad was working as a maintenance man at a high school and during the summer one of his jobs was to mow the grounds at the school.  These were my favorite times to go because I liked to see the tractor, the lunch, which in most of my memories was a TV Dinner that my mom would bring to him hot was barely a meal for someone who did pretty much manual labor all day.  This was before the super mega “hungry man” TV dinners we have today.  Me and my sister, being young and oblivious to the reality that was our Dad’s life would sit there and wait, hoping that he would share the little dessert cake which was normally a brownie or some sort of cranberry pie thing, with us and every time, my dad, who was busting his ass all day at a minimum wage job, which garnered little to no respect, managed to pretend like he was going to eat it and eventually would give it to me and my sister to share.  Even though my Dad was likely still hungry after that little lunch, it meant more to him to see the smiles on our faces than to eat that little bit extra of food.

My dad became a Deacon right under my nose, I didn’t realize at the time when he would go on “retreats” that he was studying to be Ordained.  All I knew was that he would always bring me and my sister each and individually packaged bowl of cereal.  We thought the tiny boxes were so cool!  Never even thinking that my Dad might have gone without breakfast to bring them home to us.  I never really thought about why my Dad even wanted to become a Deacon in the first place, perhaps it was because there were a number of times that the Church came to our family’s aid when we had trouble to make ends meet.  I’m sure that my dad felt a calling and a strong desire to repay the services bestowed to him.  Earlier in the aforementioned article, the new Deacon says, “When a Deacon serves at the altar; he stands as a sign of the poor and the needy.”  Perhaps that is why my Dad chose to become a Deacon, to be an ambassador for “our kind.”
Posted by juanbook at 06:03